Amazing Places To Experience Around The Globe (Part 1) 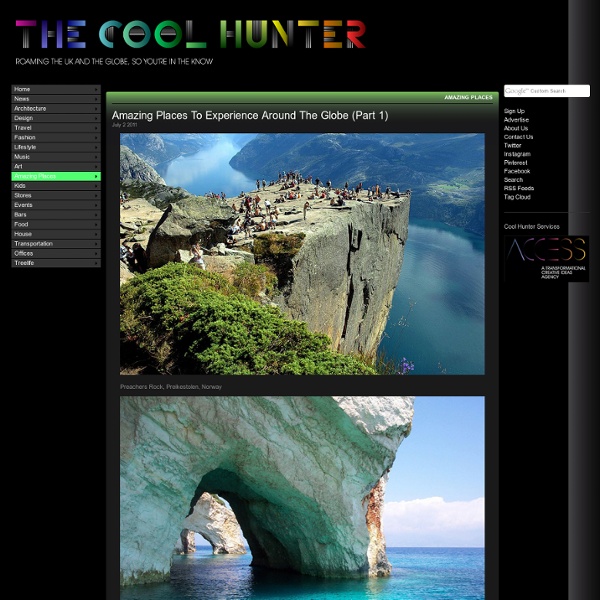 Nest Builds a Smart Smoke Detector With Fewer False Alarms When smoke alarms aren’t beeping, they often fade into the background of our homes; we rarely check to make sure they’re in working order. So when you remove the batteries to stop the beeping over some extra-crispy cookies, you might forget to replace them and consequently miss an important alert. The Nest Protect, from the same creator as the smart thermostat, is a new smart smoke detector and CO detector that actually isn't annoying. At $129 per unit, the Protect is designed to produce fewer false alarms and avoid that low-battery beep at 2 a.m.; each Nest Protect is connected to your home’s wireless network and to one other through another private network. Fewer False Alarms “This is a product that the government mandates that you have to have, that you need to help keep you safe," Nest Founder and CEO Tony Fadell told Mashable. When Protect notices smoke or CO levels rising, it gives you a verbal “heads up” about the issue. Smarter and Safer Ongoing Mission Image: Mashable, Nest

You Can’t ‘Waste Your Vote’! | Chicken Nation - Patrick Alexander's Personal Internet Dennis the Election Koala gives Ken the Voting Dingo an important lesson in civics! Any time there’s a federal election approaching, you’ll see and hear Australians saying things like, “I’d like to vote for [Minor Party/Independent] but the most important thing is to keep [Major Party A] out, so I’d better vote for [Major Party B].” But this concern doesn’t apply in Australia; we have a more elegant voting system than that. So here’s a comic designed to clear up this common misconception and explain how preferential voting works! For sharing on the web: For printing and copying a pamphlet: Make an A5 pamphlet by printing a double-sided A4 sheet and folding it in half. Hi-res (PNG format) A4 sheet: Side 1, Side 2PDF version — ready to simply print and fold High resolution: A4 pages, 300 dpi, aliased black-and-white. NEW!!! By popular request, I have created a ‘softer’ edit of the comic in order to make it as accessible as possible.

We declare the world as our canvas106 of the most beloved Street Art Photos - Year 2012 Click on a photo and you make it bigger and can post a comment on it. And thats some of the most beloved Street Art Photos posted in 2012 on Street Art Utopia! A member of Street Art Utopia on Facebook wrote two year ago this nice piece about the future: – My son, do you want to hear something strange? – Yes! – You know the new tree painting we did on the garage last week.. – What? – Well, yes, many were. – Was art forbidden? – Well no, but it had to be in special buildings only. – Wow.. – Yes, my son.