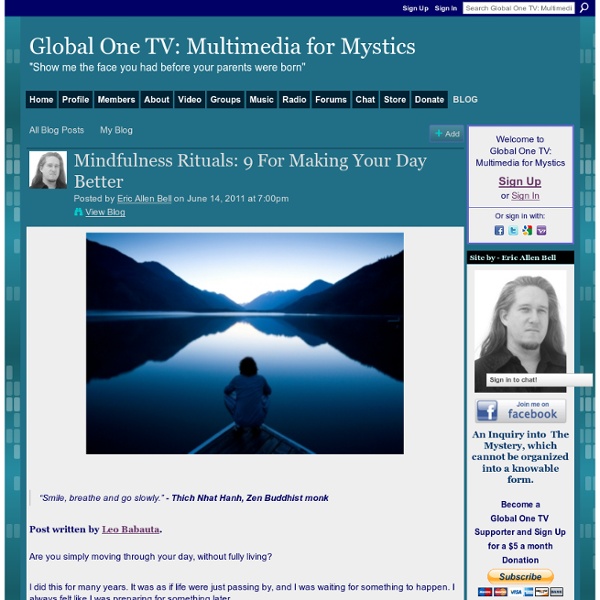 “Smile, breathe and go slowly.” - Thich Nhat Hanh, Zen Buddhist monk Post written by Leo Babauta. Are you simply moving through your day, without fully living? I did this for many years. But today isn’t preparation for tomorrow. Fully live today by being mindful. You don’t need to do all of these, but give a few of them a try to see if they make your day better. Mindfulness Rituals Ritual isn’t about doing a routine mindlessly. Here are a few of my favorites: 1. 2. 3. 4. 5. 6. 7. 8. 9. These rituals aren’t the only time you should be mindful, but they’re great reminders. Related:  Nature Photos

Nature Knows: Amazing macro-photography of individual snowflakes [10 Pictures] Photographer Alexey Kljatov takes incredible close-up photos of snowflakes in his backyard in Moscow. "I capture snowflakes on the open balcony of my house, mostly on glass surface, lighted by an LED flashlight from the opposite side of the glass, and sometimes in natural light, using dark woolen fabrics as background." Source: 7 Reasons You Should Meditate | Mindfulness Meditation Health Benefits Jeanna Bryner, LiveScience Managing Editor | June 13, 2012 08:26am ET Credit: Dreamstime Sitting in total silence, palms facing upward and eyes closed, mouthing the traditional "Ommmmm" sounds, would seem a practice for monks and other ascetic humans. Turns out, various types of mindful meditation (no Tibetan temple needed) can fit perfectly into the lives of a 9-to-5 business man or woman. And plenty of science suggests the benefits can be great.

Miyamoto Musashi - "Go Rin No Sho" - A Book of Five Rings by Miyamoto Musashi by Miyamoto Musashi I have been many years training in the Way of strategy, called Ni Ten Ichi Ryu, and now I think I will explain it in writing for the first time. It is now during the first ten days of the tenth month in the twentieth year of Kanei (1645). From youth my heart has been inclined toward the Way of strategy. After that I went from province to province dueling with strategist of various schools, and not once failed to win even though I had as many as sixty encounters. When I reached thirty I looked back on my past. Since then I have lived without following any particular Way. Strategy is the craft of the warrior. There are various Ways. It is said the warrior's is the twofold Way of pen and sword, and he should have a taste for both Ways. The Way of Strategy In China and Japan practitioners of the Way have been known as "masters of strategy". Recently there have been people getting on in the world as strategists, but they are usually just sword-fencers. Timing in strategy

The joy of cloudspotting: 10 incredible visions in clouds A “cloud on the horizon” means that something bad is about to happen. Meanwhile, someone with their “head in the clouds” is thoroughly out to lunch. As Gavin Pretor-Pinney points out in today’s talk, clouds get a bad rep when it comes to language. Gavin Pretor-Pinney: Cloudy with a chance of joy“But I think they’re beautiful, don’t you?” Pretor-Pinney is the founder of the Cloud Appreciation Society and, in this talk, he asks each of us to do something we excelled at when we were kids — looking up at the clouds and letting our imaginations run wild. Below, Pretor-Pinney (and a few guests) shares a few cloud images with the TED Blog. A heart-shaped cloud, spotted by Angelo Storari of Ancona, Italy. A fish in the sky, spotted by Gavin Tobin of the Blasket Islands in Ireland. Spotted by Andrew Kirk of Deep Springs, California. A cloud in the shape of a UFO, spotted by Ron Biggs in Puerto de la Cruz in Spain. Spotted by Ron Engels over Central Brazil. Clouds, in wave form.

Meditation Boosts Attention Span The life of a Buddhist monk may seem far-removed from the busy, gadget-packed daily buzz most of us experience. But new research suggests daily meditation can give us a piece of the peaceful life, as the focused practice boosts attention spans. "You wonder if the mental skills, the calmness, the peace that [Buddhist monks] express, if those things are a result of their very intensive training, or if they were just very special people to begin with," said Katherine MacLean, who worked on the study as a graduate student at the University of California – Davis. [10 Ways to Keep Your Mind Sharp] To find out, MacLean and colleagues had a group of 30 people with an average age of about 49 go on a three-month meditation retreat in Colorado, while a second group of 30 waited their turn (and were used as a reference with which to compare results from the first meditation group). The second group went on the retreat three months after the end of the first retreat.

4-ACO-DMT - Into the Abyss - 86610 Citation: lilfoot. "Into the Abyss: An Experience with 4-ACO-DMT (ID 86610)". Erowid.org. Aug 27, 2010. erowid.org/exp/86610 It began one morning when a friend and I were on our way back from a party the night before. I had a milligram scale and a fresh bag full of 500 mg 4-AcO-DMT that I was waiting to crack into once we got home. About 10 minutes from home we heard a siren and saw lights flashing in our rear view. In total fight-or-flight mode, I realized that I sure as hell didn't want to go to jail, and even if 4-AcO-DMT is technically legal I didn't want to take any chances. We waited and waited and waited for the K9 unit to appear, the entire time I sat on the curb wondering, 'Am I about to start blowing up right here in front of half of my local PD and freak the fuck out on all this shit?' Immediately once I re-entered the car I told John, 'I need to puke RIGHT NOW.' Summer Slaughter, a big death metal show that was in town at the time. There was no entity contact.

Intentional Acts of Kindness Although kindness can be misunderstood as an ineffectual or even superficial nicety, it’s neither. Like many amazing practices I’ve learned through mindfulness training, kindness is inspiring, powerful, courageous and wise. It’s also disarming, compelling and transformative. Like mindfulness itself, kindness is a natural human quality that requires intentional action to realize it’s potential. Studies show that thinking about, observing or practicing a kind act stimulates that vagus nerve, which literally warms up the heart and may be closely connected to the brain’s receptor networks for oxytocin, the soothing hormone involved in maternal bonding. Kindness—which reduces stress, anxiety and depression—can literally put us, and others, at ease. Try it next time you are out and about. The more we practice, the better we get at it. An American solider who’d been in Iraq was taking a mindfulness-based stress reduction (MBSR) course offered by the Army upon his return. 1. 2. 3. Resources

Fast Lane To Heaven In 1982 I died from terminal cancer. The condition I had was inoperable, and any kind of chemotherapy they could give me would just have made me more of a vegetable. I was given six to eight months to live. I had been an information freak in the 1970s and I had become increasingly despondent over the nuclear crisis, the ecology crisis, and so forth. That is what killed me. I remember waking up one morning at home about 4:30 AM, and I just knew that this was it. The next thing I remember is the beginning of a typical near-death experience. There was this Light shining. So my request was honored and I had some conversations with the Light. The Light responded. We all have a Higher Self, or an oversoul part of our being. Then the Light turned into the most beautiful thing that I have ever seen: a mandala of human souls on this planet. The human soul, the human matrix that we all make together is absolutely fantastic, elegant, exotic, everything. In that instant I realized even more.