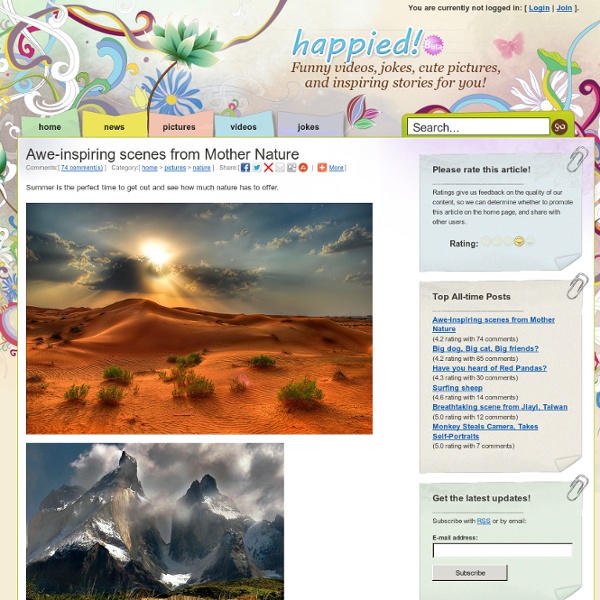 Summer is the perfect time to get out and see how much nature has to offer. Photo from EarthAirFire You Might Also Like: Comments: Leave a reply:

The 10 Most Disturbing Books Of All Time In my younger days if I heard a book or movie was disturbing or hard to handle I generally took that as a challenge. Most books generally turned out to not be too bad, but occasionally I’d come across something that would leave me with a sick feeling in my stomach for weeks. I’ve largely outgrown this “genre” of late, but here are my picks for the ten most disturbing books of all time. Any one of these books is capable of leaving you feeling a little depressed at the least, and permanently scarred at the worst. 10. Blindness is a book with a truly horrifying scenario at it’s heart: what if everyone in the world were to lose their sight to disease in a short period of time? 9. Anti drug crusaders should stop airing goofy commercials that nobody takes seriously and start pushing to have Requiem For A Dream made required reading for every high schooler in the country. 8. Naked Lunc is another ode to drug addiction. 7. 6. Bleak. 5. 4. 3. 2. 1.

The 13 scariest books of all time NOT written by Stephen King Yes, we all know King is the Sultan of Scare, and that books like The Shining, Salem's Lot, and It will make you quake in your fuzzy slippers. But here are 13 books that'll start the shivers while spreading the wealth. SILENCE OF THE LAMBS Thomas Harris This isn't the first time we'd meet the psychopathic Hannibal Lecter—that'd be Red Dragon—but it was the most eerie. And what's more, he wasn't the only serial baddie at work: Buffalo Bill took his share of trophies as Silence of the Lambs worked its way into the public's collective cerebral cortex. GHOST STORY Peter Straub Four men, comfortable in their middle-agedness, never speak of the young woman they killed 50 years before and buried in a watery grave. THE ROAD Cormac McCarthy DRACULA Bram Stoker It may be an oldie—one of the oldie-est, actually—but Stoker's Dracula is the fount from which incarnation of the modern vampire draws power. THE EXORCIST William Peter Blatty THE HAUNTING OF HILL HOUSE Shirley Jackson THE CIPHER Kathe Koja

abandoned places Abandoned Six Flags in New Orleans | Beyond the Photos I met fellow explorers Mike Rosati and Minda Vermazen for the first time in the Las Vegas Airport, en route to New Orleans to photograph the abandoned Six Flags Theme Park that closed when Hurricane Katrina struck in August 2005. We read online that the park was being dismantled and sold for scrap beginning in January 2011, so with little time to spare, we hastily made plans to visit during the first week of December 2010. Our plane landed around midnight, and we drove straight to the park on a cursory scouting mission. We took a couple night shots from outside the park, made a plan, then headed to the hotel for some rest. Gaining Access The next day, we spent 10 hours documenting and exploring the park. We entered through a hole in a barbed-wire fence along a main thoroughfare, right next to a Six Flags sign that still reads “Closed for Storm” a full five plus years after Hurricane Katrina ravaged the city. History and Geography Exploring the Park The Future Wrapping Up

Top 10 Travel The Ghost City – an apocalyptic inspiration for filmmakers for as long as I can remember. There is nothing more surreal than witnessing an abandoned city, and writers through the ages have grabbed hold of this fact with both hands. There is however some degree of foundation to this surreality. However it happens, the topic interests me greatly. Founded in 1876, Bodie is the authentic American ghost town. Dwindling resources proved fatal however, and although greatly reduced in prominence, Bodie held a permanent residency through most of the 20th century. Today, Bodie is preserved in a state of arrested decay. More of a modern choice this time. After this the whole thing received the cover-up treatment. Varosha is in the Turkish occupied city of Famagusta in Cyprus. The Annan Plan had provided for the return of Varosha to Greek Cypriot control, but after the rejection of the proposal by Greek Cypriot voters this hand-over to Greek-Cypriots has not materialized. Hashima Island (??

Creepy, Crusty, Crumbling: Illegal Tour of Abandoned Six Flags New Orleans [75 Pics] Hurricane Katrina killed this clown. According to the photographer, “An abandoned Six Flags amusement park, someone spray painted ‘Six Flags 2012 coming soon’ on the wall above the downed head. But they were clownin.’ Six Flags will never rebuild here.” That’s sad, but much of New Orleans has not been restored to her former glory. This defunct amusement park on the cityâ€™s eastern edge must surely serve as a constant reminder that Katrina tried to wash them off the map. Welcome to Zombie Land kids! Chained dreams of fun at Six Flags New Orleans, abandoned Jazzland – that’s what Six Flags opened as “Jazzland” in 2000. Some photographers can see past the lifeless amusement park’s decay and desolation, showing us that there is still a chance the place could be cheery and not cheerless. Like a Bad Dream. Just in case you don’t know the scoop on what Hurricane Katrina did to New Orleans and Six Flags, this photo is of New Orleans, LA, on Sept. 14, 2005. No lines for dead rides.

Photographing Decay: The Strange Appeal and Educational Qualities of Abandoned Places | (Image: Dennis Gerbeckx, cc-nc-2.0) While Urban Ghosts covers a range of subjects, most of our content to date has focussed on historically intriguing places long since abandoned. So today, in the wake of our 500,000th unique visit, it’s time to take a step back and ask a couple of questions: why are we so fascinated by forgotten places? and why do mainstream individuals indulge in this strange under-the-radar hobby known as urban exploration? From a visual perspective, urbex photographer Thomas Slatin has some answers. (Image: Brent Pearson, cc-nc-nd-2.0) Writing on CurrentPhotographer.com, Thomas explains that “taking photos of abandoned places can teach you an enormous number of specialized skills that are generally not taught in a traditional classroom setting.” (Image: Erika Karl, cc-nc-2.0) Framing – This has nothing to do with what is clamped around a photo before it goes on the wall, and everything to do with how a composition is established. (Images: Rick Harris, cc-sa-2.0)

The Bald Truth | ArtHarris.com TITANIC The New Exhibition - Artifacts Among the hundreds of artifacts on display in Sears Presents Titanic: The New Exhibition there are many spectacular never-before-seen items, including some from a dive to the Titanic in 2000. Guests can see perfume samples that were being transported to New York on Titanic and an inspection card for a passenger originally booked to travel on the Majestic. The card shows Majestic crossed out and replaced with the name of the doomed Titanic. In addition to a part of the wheel from Titanic’s bridge, brass letters from a sign spelling “C deck”, garland that once decorated Titanic’s Grand Staircase, a toilet from the lavatory of a first-class state room and many, many more fascinating treasures, visitors will come face-to-face with the 15-ton “Big Piece,” the largest piece of Titanic ever recovered.

Crime Scene NI Hawksbill Sea Turtle Pictures Searches are NOT case sensitive. Singular words usually have more success than plurals. Do NOT use punctuation (, .) or quotation marks (' "). Enter words that apply to the type of images you're seeking. ALL of these words is like saying the results must have this AND that. This type of search allows you to enter any words, partial words, or series of words. This open vocabulary search may also produce inappropriate matches. Choose number of images per page from the pull-down menu to suit your connection speed or monitor size. Limit your criteria if you do not want to be swamped by thousands of pictures.

Isidor & Ida Straus: In the Name of Love Isidor Straus, 67, and his wife Ida, 63, almost always traveled together; in fact, they were rarely apart during their married life and wrote each other daily during periods of separation. The son of German immigrants who had settled in Georgia, Isidor met Ida when he and his brother moved to New York City following the Civil War. Isidor arrived penniless in New York because he had paid every one of his debts before he left Talbotton, Georgia, even though standard practice at the time was not to honor the suddenly worthless Confederate scrip. The Strauses—now wealthy philanthropists who generously supported dozens of causes in New York— had traveled to Europe early in 1912, crossing the Atlantic on the German liner Amerika. On the night of the disaster, as the call to board the lifeboats went out, Isidor escorted Ida to Lifeboat 8 and prepared to say goodbye to her. The Strauses were not far from a member of their family on the night of their deaths.

introduction Serial killers both disgust and fascinate us. Though we could never fathom commiting such heinous crimes, we nonetheless are intrigued by those who do. Yet, it should be noted that this web page is in no way designed to give "credit" or undo press to these sick and twisted people. Rather, it is an exploration of abnormal psychology, human nature, and the state of our society today. Murder Murder is defined as the willful and unlawful killing of one human being by another. Generally, murder/homicide occurs due to one of two basic motivations: the reaction murder: as an outcome of an event: a quarrel, rage, reaction to an insult, or jealousy, and the"for gain" type of murder: for monetary gains, revenge, protection of ones self, or even power. Serial Murder Serial murder is a completely different form of murder that does not fall into the two aforementioned motives of "normal" murder, if there is such a thing. More specifically, a series of killings may be classified as serial murder when:

Stories about famous serial killers and murder cases at the Crime Library. on truTV.com The Frankford area of Philadelphia was once a town older than the City of Brotherly Love itself. At one time, it was a prosperous area, but by 1980 it had become a crime-ridden slum populated by prostitutes, junkies, and small businesses struggling to survive. This was the area that Sylvester Stallone selected as the setting for his film Rocky. It was here in 1985 where the first victim was found in a railroad yard. Helen Patent was nude from the waist down and she had been posed in a sexually provocative position, with her legs open and her blouse pulled up to expose her breasts. Between seven and eight women from 28-68 became the victims of this violent rapist and serial killer in an old section of Philadelphia.