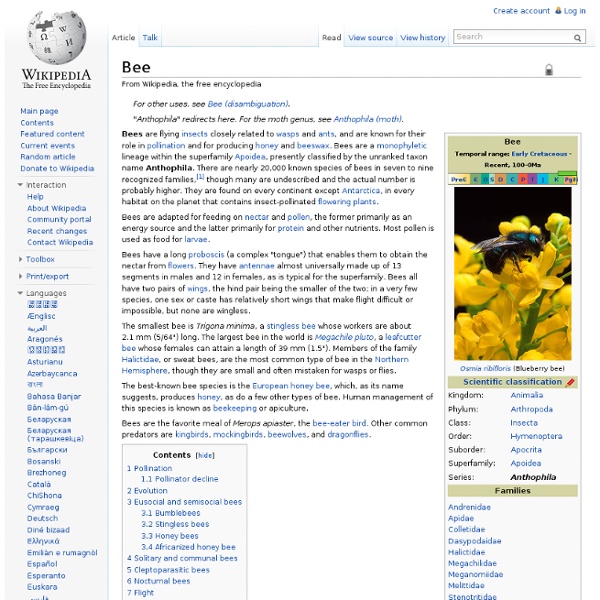 Bees are flying insects closely related to wasps and ants, and are known for their role in pollination and for producing honey and beeswax. Bees are a monophyletic lineage within the superfamily Apoidea, presently classified by the unranked taxon name Anthophila. There are nearly 20,000 known species of bees in seven to nine recognized families,[1] though many are undescribed and the actual number is probably higher. They are found on every continent except Antarctica, in every habitat on the planet that contains insect-pollinated flowering plants. The smallest bee is Trigona minima, a stingless bee whose workers are about 2.1 mm (5/64") long. The best-known bee species is the European honey bee, which, as its name suggests, produces honey, as do a few other types of bee. Bees are the favorite meal of Merops apiaster, the bee-eater bird. Evolution Bees, like ants, are a specialized form of wasp. Eusocial and semisocial bees Honey bees defend against wasp attacks Bumblebees Stingless bees

RANDOM FLAMING DRAGON Owl Owls hunt mostly small mammals, insects, and other birds, although a few species specialize in hunting fish. They are found in all regions of the Earth except Antarctica and some remote islands. Anatomy[edit] Owls have large forward-facing eyes and ear-holes; a hawk-like beak; a flat face; and usually a conspicuous circle of feathers, a facial disc, around each eye. Owls can rotate their heads and necks as much as 270 degrees. Different species of owls make different sounds; this wide range of calls aids owls in finding mates or announcing their presence to potential competitors, and also aids ornithologists and birders in locating these birds and recognizing species. Breeding and reproduction[edit] Owl eggs usually have a white color and an almost spherical shape, and range in number from a few to a dozen, depending on species and the particular season; for most, three or four is the more common number. Behavior[edit] Most owls are nocturnal, actively hunting their prey only in darkness.

The Barn Owl Trust Bird of prey Birds of prey, also known as raptors, hunt and feed on other animals. The term "raptor" is derived from the Latin word rapere (meaning to seize or take by force).[1] These birds are characterized by keen vision that allows them to detect prey during flight and powerful talons and beaks. In most cases, the females are larger than the males. Because of their predatory nature, they face distinct conservation concerns. Definition[edit] Classification by ancestry[edit] Strigidae: (typical owls)Tytonidae: (barn and bay owls). The observation that otherwise unrelated bird groups may perform similar ecological roles and bear striking morphological similarities to one another is explained by the concept of convergent evolution. Common names[edit] The common names for various birds of prey are based on structure, but many of the traditional names do not reflect the evolutionary relationships between the groups. Variations in shape and size See also[edit] References[edit] Jump up ^ Brown, Leslie (1997).