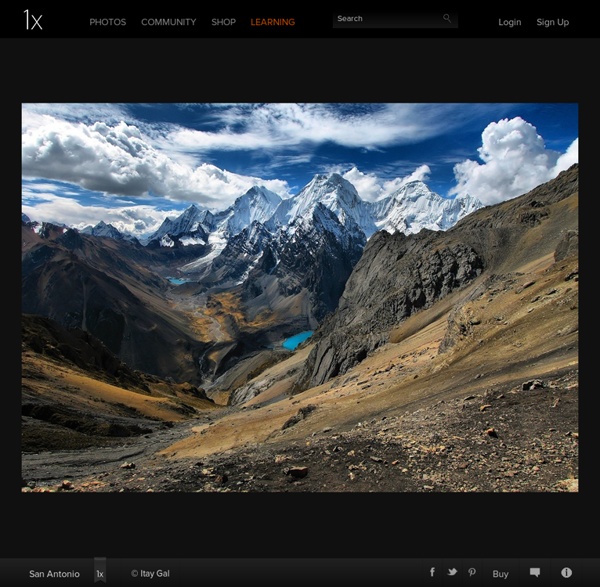 Photographer Uses Sugar, Cotton, Feathers and Chocolate to Construct Stunning Landscapes As part of our ongoing partnership with Feature Shoot, Beautiful/Decay is sharing Alison Zavos’ article on Matthew Albanese. “DIY Paradise” was constructed from cotton, salt, cooked sugar, tin foil, feathers & canvas. My work involves the construction of small-scale meticulously detailed models using various materials and objects to create emotive landscapes. Every aspect from the construction to the lighting of the final model is painstakingly pre-planned using methods which force the viewers perspective when photographed from a specific angle. Using a mixture of photographic techniques such as scale, depth of field, white balance and lighting I am able to drastically alter the appearance of my materials.—Matthew Albanese Matthew Albanese is a fine art photographer from New Jersey who specializes in creating and photographing miniatures from common household objects and materials.

Earth: Landscapes That Will Blow Your Mind - StumbleUpon “We are the children of our landscape; it dictates behavior and even thought in the measure to which we are responsive to it” (Lawrence Durrell). Presenting a collection of some of the most amazing shots we’ve came across. Stay tuned in for more of these in the future. Evil Forces by Skarphedinn Thrainsson Namib by Daniel Montero Crater Lake by Marc Adamus Mountains Of The Moon By Jose C. Stranger Highways by Rechitansorin Mountains By CubaGallery The Begining by Marc Adamus Kirkjufell by Raymó Brandlehow Burst by Sut68 The Machu Picchu Guard Tower by Matt Wade Beinn Dearg Mor by John Parminter Road To Heaven by Andreas Reinhold At Dawn by Dennis Fischer Smoke by Michal Ostrowski Blocks Of Ice by Mac Danzig Reflection by Liloni Luca Spring On Fields by Krzysztof Browko Sorrow by by Christolakis Sidari Cliffs by Krzysztof Browko Mount Doom by Skarphedinn Thrainsson Beautiful Skies by Svein Oftedal Kelimutu Volcan by Matthieu GRYMONPREZ Norway by Malcolm X

Magnificent scenery of the cave 51 Photos Cave is one of the most mysterious created by Mother Nature. From ancient times, the cave appeared in a variety of legends, myths and misconceptions of the people. Because of the lack of understanding of the inner world of the cave, people tend to hold to their fear. However, once actually enter these places, you will be filled completely different feel and mood other than the outside world. Cave has a strange and magnificent scenery, there are various shapes of stalactites and stalagmites, it is amazing. Photography allows us to enjoy these strange views at home.

Glaucus atlanticus These sea slugs feed on other pelagic creatures including the venomous cnidarian, the Portuguese Man o' War. Because the sea slug stores stinging nematocysts from the cnidarian within its own tissues, a human picking up the sea slug may receive a very painful sting. For more information on the effects of the nematocysts, see Portuguese man o' war. Characteristics[edit] The blue sea slug (here shown out of water, and thus collapsed) is one of the smallest members of its biological family, Glaucidae At maturity Glaucus atlanticus can be up to 3 centimetres (1.2 in) in length.[3] It is silvery grey on its dorsal side and dark and pale blue ventrally. The radula of this species bears serrated teeth.[5] Distribution and habitat[edit] This nudibranch is pelagic, and occurs throughout the world's oceans, in temperate and tropical waters. Life history and behavior[edit] G. atlanticus is able to feed on Physalia physalis due to its immunity to the venomous nematocysts. References[edit]

Marvel at the Magnificent Marble Caves [35 PICS] - StumbleUpon Can you imagine something happening that would endanger these exquisite azure caverns? It might if Chile continues with plans to build five hydro-power dams in Patagonia. Photo #7 by © Jorge Leon Cabello The water has eroded the marble to create cavities and marble caves. Amazing geological formations on Chilean side of Lake Carrera. It would be a real shame if the hydro-power dams damage the lake and the marble caves on top of the surrounding natural habitats for wildlife. View of the lake and where to find the marble caverns in the Aysen region of Chile. Most popular photography on StumbleUpon! 2011 is over, In this article, I am showcasing the most beautiful photographs that were stumbled on StumbleUpon. Let us take a look at this truly jaw-dropping collection and enjoy! Source: StumbleUpon *None of the images on this page are mine,they were found on StumbleUpon, meant to inspire.Any problems, just email.

Photographs of Mirrors on Easels that Look Like Paintings in the Desert Daniel Kukla is a photographer who had formal training in biological and anthropological sciences. His educational background plays a major part of his artistic practice, and this can be seen in his clever project titled, The Edge Effect. In the description and explanation of the project, Kukla writes, In March of 2012, I was awarded an artist’s residency by the United States National Park Service in southern California’s Joshua Tree National Park. While staying in the Park, I spent much of my time visiting the borderlands of the park and the areas where the low Sonoran desert meets the high Mojave desert. While hiking and driving, I caught glimpses of the border space created by the meeting of distinct ecosystems in juxtaposition, referred to as the Edge Effect in the ecological sciences. We love how the photos look like they’re of paintings of the desert placed within the desert. You can find the rest of the photographs in the series over on Kukla’s website. P.S.