Nature pictures. Amazing Nature Photos. Imgur. Index. (CNN) — It could almost be a scene from a slapstick comedy: a marmot stands frozen in fear, slack-jawed and balanced on one foot, as it suddenly notices a charging fox. 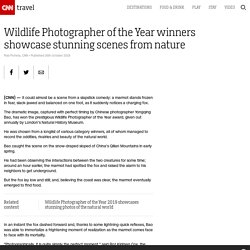 The dramatic image, captured with perfect timing by Chinese photographer Yongqing Bao, has won the prestigious Wildlife Photographer of the Year award, given out annually by London's Natural History Museum. He was chosen from a longlist of various category winners, all of whom managed to record the oddities, rivalries and beauty of the natural world.

Bao caught the scene on the snow-draped sloped of China's Qilian Mountains in early spring. He had been observing the interactions between the two creatures for some time; around an hour earlier, the marmot had spotted the fox and raised the alarm to his neighbors to get underground. But the fox lay low and still; and, believing the coast was clear, the marmot eventually emerged to find food. Amazing Shots of a Rainbow Hummingbird Captures Natural Phenonmena. Artist and photographer Christian Spencer was standing on his verandah in Rio de Janeiro when he made an amazing discovery. 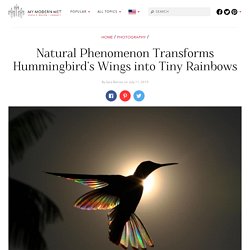 When the black Jacobin hummingbird flew with the sun striking its open wings, a beautiful prism effect appeared. At that moment, it was as if its body was made of rainbows. In 2011, Spencer recorded the bird's movements for a film called The Dance of Time. The movie went on to receive 10 international awards as well as three best film honors. But, that wasn’t the end of the rainbow hummingbirds. Although Winged Prism seems too magical to be true, Spencer says that there wasn't any digital manipulation involved.

Hollywood-Style Photos Show How Wildlife and Humans Collide. Head Like an Orange. Aurora australis lights up Uluru. Photos by Justin Lawson. Elementals. Google Street View Hyperlapse. Many Beautiful Things. 18 Remarkable Photos of Nature Reclaiming Civilization. Source: danjur Humanity is often proud of its great feats of engineering, we are dazzled by the structures we can create, by our mastery over our surroundings, and all of this is for good reason. 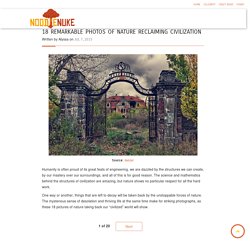 The science and mathematics behind the structures of civilization are amazing, but nature shows no particular respect for all the hard work. One way or another, things that are left to decay will be taken back by the unstoppable forces of nature. The mysterious sense of desolation and thriving life at the same time make for striking photographs, as these 18 pictures of nature taking back our “civilized” world will show. The joy of cloudspotting: 10 incredible visions in clouds. A “cloud on the horizon” means that something bad is about to happen. 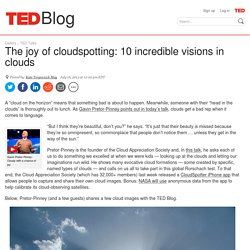 Meanwhile, someone with their “head in the clouds” is thoroughly out to lunch. As Gavin Pretor-Pinney points out in today’s talk, clouds get a bad rep when it comes to language. Gavin Pretor-Pinney: Cloudy with a chance of joy “But I think they’re beautiful, don’t you?” He says. “It’s just that their beauty is missed because they’re so omnipresent, so commonplace that people don’t notice them … unless they get in the way of the sun.” Pretor-Pinney is the founder of the Cloud Appreciation Society and, in this talk, he asks each of us to do something we excelled at when we were kids — looking up at the clouds and letting our imaginations run wild. Below, Pretor-Pinney (and a few guests) shares a few cloud images with the TED Blog. A heart-shaped cloud, spotted by Angelo Storari of Ancona, Italy.

A fish in the sky, spotted by Gavin Tobin of the Blasket Islands in Ireland. Spotted by Andrew Kirk of Deep Springs, California. 21+ Animals That Want To Be Photographers. Aurora australis as seen from the Australian and New Zealand mainlands. Updated The swirls, twists, and curtains of light of the aurora australis were visible from the Australian and New Zealand mainland overnight. 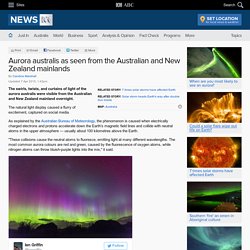 The natural light display caused a flurry of excitement, captured on social media. As explained by the Australian Bureau of Meteorology, the phenomenon is caused when electrically charged electrons and protons accelerate down the Earth's magnetic field lines and collide with neutral atoms in the upper atmosphere — usually about 100 kilometres above the Earth. "These collisions cause the neutral atoms to fluoresce, emitting light at many different wavelengths. The most common aurora colours are red and green, caused by the fluorescence of oxygen atoms, while nitrogen atoms can throw bluish-purple lights into the mix," it said.

These 'Mind-Blowing And Humbling' Instagram Photos Will Remind You Of Earth's Wild Beauty. Sam and Amanda Ciurdar often find themselves retreating into nature, captivated by Earth’s beauty. 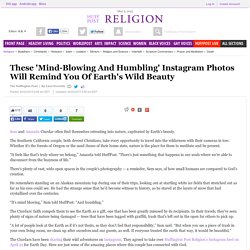 The Southern California couple, both devout Christians, take every opportunity to travel into the wilderness with their cameras in tow. Whether it's the forests of Oregon or the sand dunes of their home state, nature is the place for them to meditate and be present. “It feels like that’s truly where we belong,” Amanda told HuffPost. 30 Incredible Views you’d see if you were a bird.