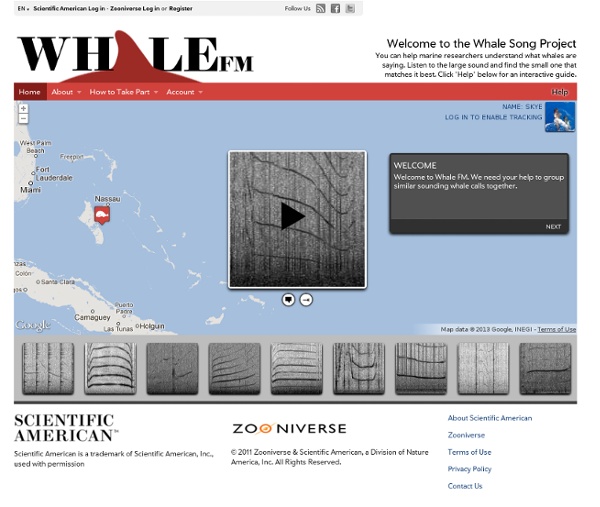 Citizen Science Alliance Cuttlefish: the Sentient Cephalopods by Brenna Lorenz All contents copyright © 1998 Brenna Lorenz, Megaera Lorenz, Malachi Pulte. All Rights Reserved.Reproduction of any part of site without express permission is strictly prohibited. All photos of the cuttlefish of Sentosa are by Brenna Lorenz. South of the city of Singapore is an island called Sentosa. Sentosa has been converted into a tourist haven, and you can reach it by cable car. One of us suggested that we try talking to them using our fingers as tentacles. We wonder if anyone else has tried talking to the cuttlefish of Sentosa, or any other cuttlefish. Cuttlefish are predacious carnivorous cephalopods related to squid and octopus. Read about Komodo dragons! Published: 11/7/98.Updated: 3/10/01. Sign My Guestbook View My Guestbook Do you want to be informed by e-mail when we add new material to our pages? Visit the rest of our pages! Visitors since 10/29/98: FastCounter by LinkExchange E-mail me!

Weta minute - he's a wee 'un - Strange But True International media are calling it the biggest weta ever found, but New Zealand experts are urging them to get a sense of perspective. American researcher Mark Moffett fed a carrot to a giant weta on a recent visit to New Zealand's Little Barrier Island and the meeting has turned into major news in the Northern Hemisphere. Pictures of the weta, or wetapunga, and its carrot have featured on websites around the world with headings including, "World's biggest insect". The story has run in The Telegraph, The Daily Mail, The Sun, The Mirror, the Huffington Post and The Times of India. New Zealand insect expert, bug man Ruud Kleinpaste, a trustee of Little Barrier Island Supporters Trust, has played down the significance of the find. "There's nothing unusual to find these weta," Kleinpaste said, though he thought the publicity for the species could be a good thing. Kleinpaste said he saw wetapunga on Little Barrier Island every time he went there. - Herald on Sunday

Theory About the Theory Overview Meta-Theory: The Organismic Viewpoint Formal Theory: SDT’s 5 Mini-Theories Other Topics of Interest Applications References Overview People are centrally concerned with motivation -- how to move themselves or others to act. Self-Determination Theory (SDT) represents a broad framework for the study of human motivation and personality. The dynamics of psychological need support and need thwarting have been studied within families, classrooms, teams, organizations, clinics, and cultures using specific propositions detailed within SDT. Meta-Theory: The Organismic Viewpoint SDT is an organismic dialectical approach. Within SDT, the nutriments for healthy development and functioning are specified using the concept of basic psychological needs for autonomy, competence, and relatedness. Formal Theory: SDT’s Five Mini-Theories Cognitive Evaluation Theory (CET) concerns intrinsic motivation, motivation that is based on the satisfactions of behaving “for its own sake.”

Galaxy Zoo Parrot Prodigy May Grasp the Concept of Zero July 15, 2005 A new study suggests that some birds may have a better grasp of numbers than the average three-year-old child. Researchers have shown that an African gray parrot may comprehend the mathematical concept of zero—an abstract notion that human children rarely understand until around four years of age. The concept of zero is surprisingly difficult to grasp, even for people. "There is some understanding of nonexistence that seems to develop naturally, but the actual use of the term 'zero' seems to need to be taught," said comparative psychologist Irene Pepperberg. The idea of zero as a nonexistent quantity was not obvious to early human cultures, Pepperberg said. Researchers in the United States and Japan have previously shown that chimpanzees and possibly squirrel monkeys can comprehend zero when taught. Zero Sum Pepperberg's most recent research with Alex, co-authored with Brandeis graduate student Jesse D.

Finding out about the astronomers who found the universe | Open Parachute Book review: The Day We Found the Universe by Marcia Bartusiak Price: US$11.53; NZ$20.82 Hardcover: 368 pagePublisher: Pantheon (April 7, 2009)Language: EnglishISBN-10: 0375424296ASIN: B005IUVQGY This is a great book – just the sort of history of science I enjoy. The title is apt. The big illusion the book shatters is the received story of how this happened through the work of Edwin Hubble. Island universes Marcia Bartusiak reveals that concepts of a larger universe go back a long way. As far back as the first century B.C., the Roman poet and philosopher Lucretius argued against a finite universe. ” whether certain cloudy spots, then being observed in the heavens in greater numbers, might be additional creations, bordering upon us but ’too remote for even our telescopes to reach,’ countless spheres with many ’Divine Centres.’ In 1755 Kant described nebular patches in the nighttime sky as: This, of course, radically reshaped how humans understood their place in the cosmos. “An odd bird”

Hovering on the Horizon The limb of the Earth is a work of beauty and a gift to science. When observed from space, the layers of the atmosphere remind us of the fragility of the cocoon that shelters life. That same view also allows scientists to detect the gases and particles that make up the different layers of our atmosphere. Astronauts aboard the International Space Station captured a bit of both in this digital photograph from July 31, 2011. Closest to Earth’s surface, the orange-red glow reveals the troposphere—the lowest, densest layer of atmosphere, and the one we live within. The different colors occur because the dominant gases and particles in each layer act as prisms, filtering out certain colors of light. A thin crescent of the Moon is illuminated by the Sun from below the horizon of the Earth. Instrument(s): ISS - Digital Camera

Icelanders approve their crowdsourced constitution — European technology news "Animal Language Article" Copyright 1995 The New York Times Company The New York Times June 6, 1995, Tuesday, Late Edition - Final SECTION: Section C; Page 1; Column 1; Science Desk LENGTH: 2199 words Chimp Talk Debate: Is It Really Language? By George Johnson PANBANISHA, a Bonobo chimpanzee who has become something of a star among animal language researchers, was strolling through the Georgia woods with a group of her fellow primates -- scientists at the Language Research Center at Georgia State University in Atlanta. Suddenly, the chimp pulled one of them aside. Grabbing a special keyboard of the kind used to teach severely retarded children to communicate, she repeatedly pressed three symbols -- "Fight," "Mad," "Austin" -- in various combinations. Austin is the name of another chimpanzee at the center. "Waa, waa, waa" said the chimpanzee, in what Dr. A decade and a half after the claims of animal language researchers were discredited as exaggerated self-delusions, Dr. Dr. But some philosophers, like Dr.

Why don’t we have a cure for AIDS yet? Last week I came across this article which describes how the number of people living with AIDS has increased due to better access to drugs which fight HIV. A fairly reasonable article … But then I made the mistake of reading some of the comments (I know, I know, I should know better) where several misconceived and ill informed opinions were circulating including the suggestion that drug companies are not interested in finding a cure – rather they are only interested in drugs that prolong life so they could profit over long periods of time. While I can understand that such misguided views could easily arise from the frustration at the perceived slow progress of science, and the fact that pharmaceutical companies have a less than pure reputation, the real reason why a cure has not been found is due to the complexity of the science involved. 1) Virus reservoirs Many drugs are limited to where they can get to in the human body. 2) Mutation 3) Complexity of Drug Design and Development*

#Consciousness shifted , #Disclosure overdue . Declare your #Sovereignty , time for #Revolution @Citi5Fund Crowdsourcing Crowdsourcing is a sourcing model in which individuals or organizations obtain goods and services. These services include ideas and finances, from a large, relatively open and often rapidly-evolving group of internet users; it divides work between participants to achieve a cumulative result. The word crowdsourcing itself is a portmanteau of crowd and outsourcing, and was coined in 2005.[1][2][3][4] As a mode of sourcing, crowdsourcing existed prior to the digital age (i.e. There are major differences between crowdsourcing and outsourcing. Some forms of crowdsourcing, such as in "idea competitions" or "innovation contests" provide ways for organizations to learn beyond the "base of minds" provided by their employees (e.g. Definitions[edit] The term "crowdsourcing" was coined in 2005 by Jeff Howe and Mark Robinson, editors at Wired, to describe how businesses were using the Internet to "outsource work to the crowd",[1] which quickly led to the portmanteau "crowdsourcing." Examples[edit]