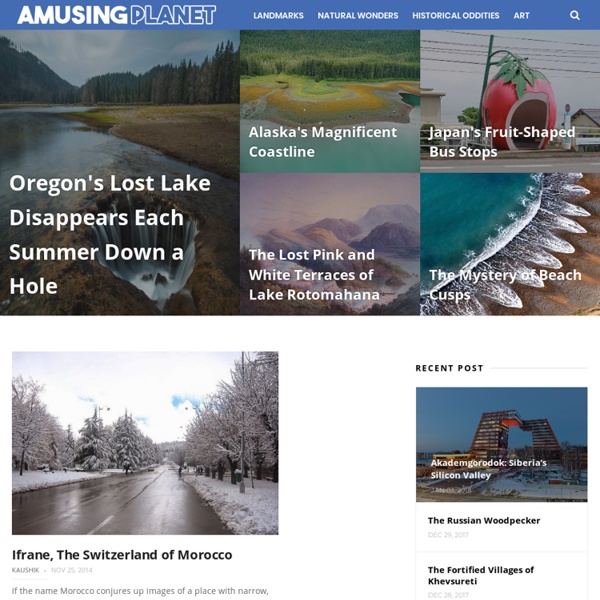 On July 16, 1945, the world’s first nuclear explosion, code named Trinity, occurred at a test site located 336 km south of Los Alamos on the barren plains known as the Jornada del Muerto in New Mexico. The plutonium device, called the Gadget, was hoisted atop a 100-foot tower and detonated at precisely 5:30 am releasing energy equivalent to 18.6 kilotons of TNT, instantly vaporizing the tower and fusing the desert sand into green glass. The shock wave was felt over 160 km away, and windows still rattled 320 km away. The success of the Trinity test meant that an atomic bomb could be readied for use by the U.S. military. The first deployment occurred on August 6, 1945, when the Uranium-235 device was dropped on Hiroshima, Japan, and the rest is history. Today, the Trinity Site is open to public only twice a year, on the first Saturday of April and October.

Abandoned This place was top secret in USSR. It was based under ground as Moscow subway stations and long undergrounds were leading down from the entrance. Even now Armahema, the author of the photos, refuses to tell the details of this place. Worth1000 Home Welcome fans of Worth1000.com. If you're looking for Worth's amazing creative content, then you've rocked up to the right place! Just in case you missed the news, Worth1000.com is now part of DesignCrowd.com - and we've preserved all the amazing Worth1000 content here so you can search the archives to find old favorites and new contest art. We're delighted to have Worth1000's talented users and their treasure trove of imaginative and original content, built over many years, as part of our design community.

Street Food Vendors From Around the World In general understanding, street food is a quick meal or drink sold in a street or other public place, such as a market or fair, by a vendor, often from a portable stall or a push cart or basket. Street foods are often regional, though many are not, having spread beyond their region of origin. Tourists and locals alike often flock to these roadside vendors because it gives people a closer connection with the food, culture and tradition of a region. Besides, they are cheap. The street food culture is found all over the world but particularly prevalent in the continent of Asia. If you love traveling and eating street food, you will enjoy this fascinating picture gallery. Fill the Silence Fill the Silence True facts for when you find yourself in the middle of an awkward pause. (2014 Webby Awards Nominee!) About

Wim Wenders Wim Wenders. Instant Stories at C|O Berlin presents a selection from the late 1960s to the early 1980s, when Polaroids were a visual notebook, a field of experimentation, and a photographic road movie. The resulting collection of pictures includes thousands of unique, personal shots of his film sets and travels through Europe, the United States, and many other places around the globe. They show Wenders in his personal surroundings and portraits of celebrities and friends including Annie Leibovitz, Robby Müller, Dennis Hopper, and Peter Handke. The exhibition will be making its first and only stop in Germany at C|O Berlin. Humans in Design A classic nudge - a tiny behavioural intervention that leads people to a particular behaviour but doesn’t force it - is the placement of graphs on power bills. Specifically graphs that compare your current rate of use to your neighbours and, sometimes, yourself. But can a tiny graph really work? Yes it can. This little intervention has been proven to lead to a decrease in power use that is at least somewhat sustained over time. The best data on this comes from US energy provider Opower.

Haunting image of boy in an Aleppo ambulance captures plight of children caught in Syrian war Once again, the haunting image of a little boy has become an emblem of Syria’s wartime suffering. But amid a worldwide outpouring of grief and outrage at the sight of Omran Daqneesh — a small, silent, solitary figure, seated bloodied and dazed in the back of an ambulance in his ravaged hometown of Aleppo — the fighting ground steadily onward, spurring even a polished veteran diplomat to rail in despair over stalled humanitarian efforts. The video of Omran, taken just after he was plucked from the rubble of his family home in Aleppo’s Qaterji district in the aftermath of an apparent airstrike, ricocheted across social media and news sites Thursday after being posted online by activists the night before. Sooty and dust-covered, the little boy doesn’t cry; not even a whimper escapes him.

prosthetic knowledge This story is already doing the rounds but is still very interesting - Machine Learning research from Georgia Tech manages to clone game design from a video recording. The top GIF is the reconstructed clone, the bottom gif is from the video recording: Georgia Institute of Technology researchers have developed a new approach using an artificial intelligence to learn a complete game engine, the basic software of a game that governs everything from character movement to rendering graphics.Their AI system watches less than two minutes of gameplay video and then builds its own model of how the game operates by studying the frames and making predictions of future events, such as what path a character will choose or how enemies might react.To get their AI agent to create an accurate predictive model that could account for all the physics of a 2D platform-style game, the team trained the AI on a single “speedrunner” video, where a player heads straight for the goal.