Joshua Klein on the intelligence of crows 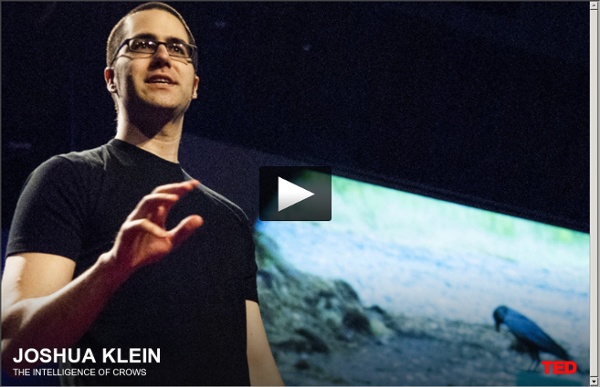 The Vaquita, the world's smallest cetacean, dives toward extinction The Vaquita, the world's smallest cetacean, dives toward extinction The culprit of the littlest porpoise's fate: accidental mortality as "bycatch" Rhett Butler, mongabay.com December 10, 2006 Accidental death in fishing nets is driving the world's smallest cetacean, the Vaquita (Phocoena sinus), towards extinction, according to a new study published in the current issue of Mammal Review, the official scientific periodical of the Mammal Society. The population of the Vaquita, a species of porpoise that measures less than 1.5 m (five feet) long and is endemic to the northwestern corner of the Gulf of California, is believed to be around 400 individuals, making it one of the two most critically endangered small cetaceans in the world. However, unlike whales and some other cetaceans that have been diminished by hunting or habitat degradation, the decline of the Vaquita is purely accidental. Citations: ROJAS-BRACHO, LORENZO, REEVES, RANDALL R. & JARAMILLO-LEGORRETA, ARMANDO (2006).

How to make pretty lights... Ambient light in 5 minutes flat! The jar lights I made created quite a bit of interest. The benefit of using LED lights over tealights is safety & if you’re having an outdoor party you don’t need to worry about weather as the light would of course be protected by the lid of the jar. Edit: I used large jars which were purchased very cheaply from a homewares store but used kitchen jars would work too. If you want uniformity with the the lids then perhaps a coat of paint? Orangutan Facts – Sumatran Orangutan Society Where do orangutans live? Orangutans live in Indonesia and Malaysia on the islands of Sumatra and Borneo. These are the only places where they live in the wild.

50 Lessons I wish I had learned earlier Welcome to our blog! Here you'll find bits and pieces of wisdom learned from cycling 17,000 miles from Alaska to Argentina together as a family. Hope it inspires you to live your dream! This is How Super Smart Octopuses Are The cephalopod’s genome reveals how the creatures evolved intelligence to rival the brightest vertebrates. We humans think we’re so fancy with our opposable thumbs and capacity for complex thought. But imagine life as an octopus … camera-like eyes, camouflage tricks worthy of Harry Potter, and not two but eight arms – that happen to be decked out with suckers that possess the sense of taste.

The Abstraction Money is nothing more than a term which represents an abstract form of exchange of labour for purchasing power. This article will not investigate interest, loans, debt or the creation of money. For in reality money could be gold, silver, match sticks or pine nuts. Gingerbread Heads The season of giving will be upon us in just a few short days. I love December. People start baking and sharing sweets with friends and family … even people that might not normally bake any other time of the year. There is just something about the holidays and baking for others that makes people feel good to give. I like to give fudge, pies, cake balls, cookies… cookies … and more cookies. I don’t really have a favorite kind though.

Weird Deep Sea Creatures (60 images) Weird Creature Fanfin Seadevil Angler Coffinfish Fangtooth Seapig 8 Things Everybody Ought to Know About Concentrating “Music helps me concentrate,” Mike said to me glancing briefly over his shoulder. Mike was in his room writing a paper for his U.S. History class. On his desk next to his computer sat crunched Red Bulls, empty Gatorade bottles, some extra pocket change and scattered pieces of paper. In the pocket of his sweat pants rested a blaring iPod with a chord that dangled near the floor, almost touching against his Adidas sandals. QUOTES TO EMPOWER AND INSPIRE WOMEN 86 Flares Facebook 0 Twitter 0 Google+ 46 StumbleUpon 1 Pin It Share 39 39 86 Flares × A Lady Knows How To Play The Game Quotes to Empower and Inspire Women benefit all of us, regardless of gender. In most developed or developing countries, women basically have the same rights as men. But despite the wonderful changes in the way our society works, we, women, still have many reservations when it comes to asserting our power and individuality.

Octopus shows unique hunting, social and sexual behavior Unlike most octopuses, which tackle their prey with all eight arms, a rediscovered tropical octopus subtly taps its prey on the shoulder and startles it into its arms. "I've never seen anything like it," said marine biologist Roy Caldwell, a University of California, Berkeley, professor of integrative biology. "Octopuses typically pounce on their prey or poke around in holes until they find something. When this octopus sees a shrimp at a distance, it compresses itself and creeps up, extends an arm up and over the shrimp, touches it on the far side and either catches it or scares it into its other arms."

Creative Kismet » Blog Archive » little guiding stars Since the new year has started I’ve been trying to think of ways to be more kind to my self. Especially when that nasty gremlins try to creep in and stump me. I remembered this origami star video on You Tube and had to get them involved in my plan.