20 Fascinating Facts About the Natural Healing Power of Bananas 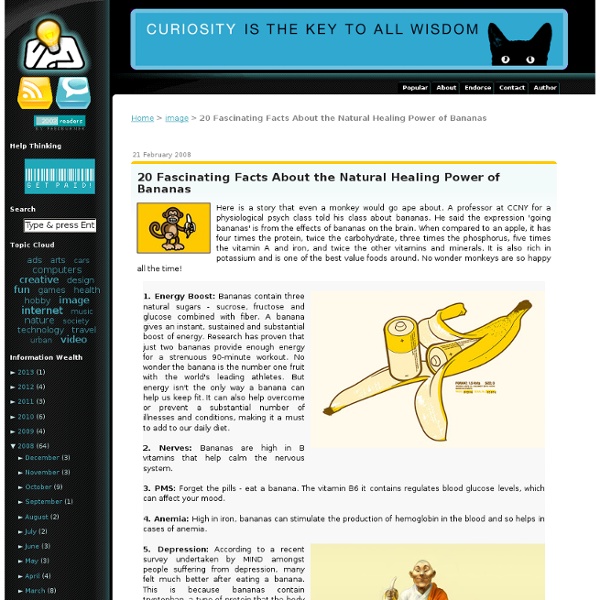 1. Energy Boost: Bananas contain three natural sugars - sucrose, fructose and glucose combined with fiber. A banana gives an instant, sustained and substantial boost of energy. BONUS: Shoe Polish - want a quick shine on your shoes? So, a banana really is a natural remedy for many ills. Related:  amazing facts

The Proven Cure and Prevention for Cancer the Medical Establishment Doesn't Want You to Know (Part II) (NaturalNews) The Budwig protocol is the food treatment and cure for cancer and other major debilitating diseases created by Dr. Johanna Budwig. It was designed for use with extremely ill and wasted cancer patients who had been sent home by their doctors to die. These were patients so ill that many were unable to take any food at all in the beginning, and had to be initially treated with enemas. The protocol is so simple that it can be tailored to fit whatever situation is encountered, from use with someone at death's door to use as a preventative and part of a healthy lifestyle. Part I this article reveals the Budwig protocol as the only well recognized and highly documented cure and prevention for cancer in existence today. There are only two essential foods in the protocol, flax oil and cottage cheese or some other sulphurated protein such as yogurt or kefir. Creating the mixture The quality of these ingredients should be the best you can find. The mixture has a very pleasant taste.

New Earth-like planet discovered | Science Astronomers have discovered a potentially habitable planet of similar size to Earth in orbit around a nearby star. A team of planet hunters spotted the alien world circling a red dwarf star called Gliese 581, 20 light years away. The planet is in the "Goldilocks zone" of space around a star where surface temperatures are neither too hot nor too cold for liquid water to form. "Our findings offer a very compelling case for a potentially habitable planet," said Steven Vogt, an astronomer at the University of California, Santa Cruz. "The fact that we were able to detect this planet so quickly and so nearby tells us that planets like this must be really common." If confirmed, the planet would be the most Earth-like that has ever been discovered in another solar system and the first strong contender for a habitable one. More than 400 exoplanets have been discovered by astronomers, but most are gas giants, like Jupiter, that would be inhospitable to life as we know it.

World Death Clock 10 Astounding Infographics Comparing Money Matters Around the World 47 Flares Google+ 2 Twitter 31 Facebook 4 Reddit 1 StumbleUpon 1 Pin It Share 0 LinkedIn 8 inShare8 47 Flares × It goes without the saying that comparing wealth and spending in different countries is almost impossible: people work, earn and even spend differently – moreover, their ways of life and views can be too different to compare. However, we still try to compare because people move around the world and they want to know what they can expect in different corners of the globe. Here are the 10 greatest examples of information graphics comparing money, spending and earning around the world: 1. U.S. The most interesting finding of the stats research and the visualization: The U.S. is the clear leader in total annual spending, but ranks 9th in Science performance and 10th in Math. Note: It is unclear what was the measure used to compare the countries in their math and science performance. 2. Most Expensive Cities is the World is an interesting visualization by Home Loan Finder. 3. 4. 5. 6.

14 fun and odd facts you probably didn’t know A12-week-old macaque – who was abandoned by his mother – was close to death when it was rescued on Neilingding Island, in Goangdong Province. After being taken to an animal hospital his health began to improve but he seemed spiritless – until he developed a friendship with a white pigeon. The blossoming relationship helped to revive the macaque who developed a new lease of life. Source Source Can you see it? Source Source Source Source Animals can be submerged in a bath of perfluorohexane without drowning, as there is sufficient oxygen available in the solvent to allow respiration to continue. Source Source Source South Korean scientists altered a cat’s DNA to make it glow in the dark and then took that DNA and cloned other cats from it — creating a set of fluffy, fluorescent felines. Source Source Source Source Most Popular Posts This Week

The Most Amazing Facts on the Internet Facetious and abstemious are the only words that contain all the vowels in the correct order. "Adcomsubordcomphibspac" is the longest acronym. It is a Navy term standing for Administrative Command, Amphibious Forces, Pacific Fleet Subordinate Command. "Almost" is the longest commonly used word in the English language with all the letters in alphabetical order. "Flushable" toilets were in use in ancient Rome. "Billie Jean" by Michael Jackson was the first video to air on MTV by a black artist. "Dreamt" is the only English word that ends in the letters "mt". "Duff" is the decaying organic matter found on a forest floor. "Fickleheaded" and "fiddledeedee" are the longest words consisting only of letters in the first half of the alphabet. "Asthma" and "isthmi" are the only six-letter words that begin and end with a vowel and have no other vowels between. "Fortnight" is a contraction of "fourteen nights." "Forty" is the only number which has its letters in alphabetical order. A cucumber is 96% water.

The Quick 9: Nine Historic People Whose Bodies May Be Missing If you've been reading the Q10 for a while now, you probably already know that I have a somewhat strange obsession with visiting cemeteries when I travel, typically ones with people of interest resting within their hallowed walls. But there are some rather important figures whose graves I will never get to visit "“ not because they were cremated, but because we simply don't know what happened to their bodies. You'd be surprised at the historical figures who have become lost in the afterlife. 1. 2. 3. Unlike Vlad, though, Genghis has disappeared at his own request. 4. and 5. 6. 7. 8. 9.

Your Age on Other Worlds Want to melt those years away? Travel to an outer planet! <div class="js-required"><hr> This Page requires a Javascript capable browser <hr></div> Fill in your birthdate below in the space indicated. (Note you must enter the year as a 4-digit number!) The Days (And Years) Of Our Lives Looking at the numbers above, you'll immediately notice that you are different ages on the different planets. The earth is in motion. The top-like rotation of the earth on its axis is how we define the day. The revolution of the earth around the sun is how we define the year. We all learn in grade school that the planets move at differing rates around the sun. Why the huge differences in periods? Johannes Kepler Tycho Brahe Kepler briefly worked with the great Danish observational astronomer, Tycho Brahe. Here you see a planet in a very elliptical orbit. Kepler's third law is the one that interests us the most. Let's just solve for the period by taking the square root of both sides: Isaac Newton

25 Most Common Symbols 25 Most Common Symbols The 25 Most Common Images appearing in People's Dreams Compiled by the faculty of the School of Metaphysics, sponsor of the annual National Dream Hotline® Published by School of Metaphysics (SOM) Publishing, National Headquarters, Windyville, Missouri 65783 U.S.A For thousands of years mankind has been captivated and perplexed by memories of experiences arising when his physical consciousness is at rest. The idea that dreams are a communication from beyond the physical experience is not new. Mankind is now on the threshold of profound evolution and spiritual revelation. The Dreamer's Dictionary is a reference book published by the School of Metaphysics for understanding and interpreting universal symbology. 1) the word/symbol and its meaning in the Universal Language of Mind, 2) more in-depth meaning in the language of mind and possible contexts of the symbol, 3) the physical derivation of the word 4) thoughts to consider. The following are sample entries. 1. 1. 3.

Olivier Levasseur Olivier Levasseur (1688 or 1690 – 7 July 1730), was a pirate, nicknamed La Buse (The Buzzard) or La Bouche (The Mouth) in his early days, called thus because of the speed and ruthlessness with which he always attacked his enemies. History[edit] Born at Calais during the Nine Years' War (1688–97) to a wealthy bourgeois family, he became a naval officer after receiving an excellent education. After a year of successful looting, the Hornigold party split, with Levasseur deciding to try his luck on the West African coast. They then perpetrated one of piracy's greatest exploits: the capture of the Portuguese great galleon Nossa Senhora do Cabo (Our Lady of the Cape) or Virgem Do Cabo (The Virgin of the Cape), loaded full of treasures belonging to the Bishop of Goa, also called the Patriarch of the East Indies, and the Viceroy of Portugal, who were both on board returning home to Lisbon. The treasure[edit] Alphabet of Olivier Levasseur "I've lost a lot of documents during shipwreck.. "[..]

This Is Luck This Is Luck Look at the top picture and you can see where this guy broke through the crash barrier (right side where the people are standing on the road). His truck left the road, traveling from right to left. He flipped end-over-end, across the culvert outlet and landed on the left side of it. Now look at the picture below. National Debt Clock Please visit the ObamaCare page at this link to explore the latest debt generating monster, destined to wind up the way Hillary Clinton's 1993 plan was conceived, with: "maximum fines: $5,000 for refusing to join the government mandated health plan; $5,000 for failing to pay premiums on time; 15 years in prison for doctors who received ‘anything of value’ in exchange for helping patients short circuit bureaucracy; $10,000 a day for faulty physician paperwork; and $50,000 for unauthorized patient treatment. When told the plan could bankrupt small businesses, Mrs. Clinton said, 'I can’t be responsible for every under-capitalized small business in America'! - Tony Snow reporting on Hillary's health care plan" (updated 11-14-2013) Debt numbers from treasury (copy and paste link): "Whenever destroyers appear among men, they start by destroying money, for money is men's protection and the base of a moral existence. "4Q 2013 GDP was $17.081 trillion.