Why Women Are Stripey 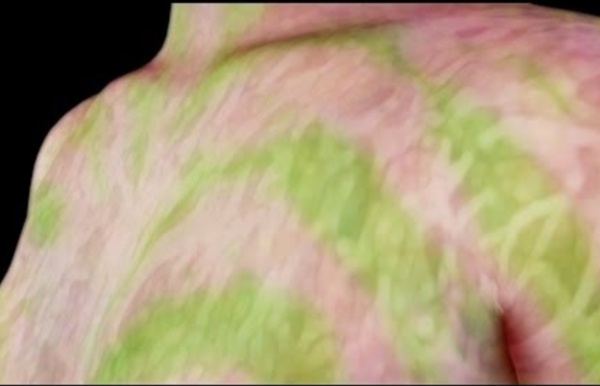 Body Painter Transforms Humans Into Breathtaking Portraits Of Animals There’s more to this beautiful heron than meets the eye. It’s actually a human body covered intricately in paint. The stunning work was created by artist Shannon Holt, a body painter from Florida who’s known for her ability to transform the human body into a canvas for beautiful art. The piece is part of Holt’s “Florida Wildlife Series,” a collection of several animal portraits, all painstakingly drawn on human bodies. Each portrait is said to have taken Holt about six to 12 and a half hours to complete, according to Caters News.

Epigenetics II: DNA Methylation in Arabidopsis Jermel Watking, Bruce Nash, and David Micklos DNA Learning Center, Cold Spring Harbor Laboratory Although DNA is the blueprint of life, not all genes are actively expressed in every cell within a multicellular organism. As discussed in our Carolina Tips® article, "Epigenetics I: Using Carolina Corn Ears to Teach Genetic Imprinting," phenotypic differences between cells occur because genes are turned on or off in a cell-specific way.

Astrophysicist Writes Brutal Response To WSJ Article Claiming Science Has Proven God Exists Recently – Christmas Day, in fact – the Wall Street Journal published an article by a Christian apologist who boldly declared that science was “increasingly” making the case for God, year-after-year. Eric Metaxas is best known as a biographical writer, but he is also lauded (in conservative circles) for his work promoting the pro-life movement and making sweeping, outrageous conclusions about the existence of God based on whatever tenuous evidence seems handy at the time. If sweeping, outrageous conclusions be Metaxas bread-and-butter, than his Wall Street Journal article is perhaps his magnum opus. It’s a doozy. After subtitling his work “The odds of life existing on another planet grow ever longer. Intelligent design, anyone?”

What makes me tick...tock? Circadian rhythms, genetics, and health Following the introduction of basic principles and key terminology of circadian rhythmicity in Lesson 1, this lesson begins with students discussing model organisms and how scientists use them; Drosophila melanogaster is used as a model for the study of circadian rhythms. Students use several NetLogo simulations to examine how light, temperature, and genetic mutations can affect a fly’s behavior. Students make connections between these simulations and their own circadian rhythms, developing models throughout the lesson of how three different factors (light, temperature, and genetic mutations) can affect both the flies’ activity levels and their own throughout the day. A possible extension to using these NetLogo models is to have students design and carry out their own fly experiment looking at how light affects fly activity.

A Guy Created Hilarious Fake Animal Facts & Put Them Up At The Zoo If you've ever been to a zoo, you know that those little 'blurbs' on the animal signs can often go overlooked. Most people don't care what country the red-tailed hawk originated from or the typical shade of bamboo koalas prefers to snack on at night. Comedian Jeff Wysaski (aka Obvious Plant), decided to spice up those fun facts by making them, well, not facts at all. Lies, I guess you could call them. He then proceeded to post these new signs up all around the L.A. An American Tragedy The election of Donald Trump to the Presidency is nothing less than a tragedy for the American republic, a tragedy for the Constitution, and a triumph for the forces, at home and abroad, of nativism, authoritarianism, misogyny, and racism. Trump’s shocking victory, his ascension to the Presidency, is a sickening event in the history of the United States and liberal democracy. On January 20, 2017, we will bid farewell to the first African-American President—a man of integrity, dignity, and generous spirit—and witness the inauguration of a con who did little to spurn endorsement by forces of xenophobia and white supremacy. It is impossible to react to this moment with anything less than revulsion and profound anxiety.

Are Math Equations Beautiful? Euler's Identity Makes Mathematicians Swoon Drumroll, please. Here is Euler's identity: eiπ + 1 = 0. Did you leave you breathless? Stop And Smell The Cherry Blossoms During Hanami In Japan Each spring, the sakura bloom to display pastel pink hues throughout the entire country of Japan. Viewing these flowers is the tradition of hanami, and it's a pretty huge deal. The word itself means to just view flowers (hana means "flower" and mi is "to look"). During hanami season, which last for a few weeks in March and April, people hold flower appreciation picnics under the cherry blossoms. Related: Gardens By The Bay, Singapore's Sustainable 'Superpark' The annual event of literally enjoying beautiful flowers takes shape in many ways.

Ancient Babylonian Tablet Explained As A Trigonometric Table Almost a century ago, Edgar Banks – the inspiration for Indiana Jones – dug up a clay tablet in southern Iraq, but it took until now for its meaning to be understood. With this explanation has come insight into Babylonian mathematics, which operated on a different, and in some ways preferable, system than our own. In 1945, it was realized that the tablet, known as Plimpton 322 after it was sold to collector George Plimpton for $10, had mathematical significance, but the details remained a mystery. New research argues it represents part of a trigonometric table, and one more accurate than those that came afterwards.