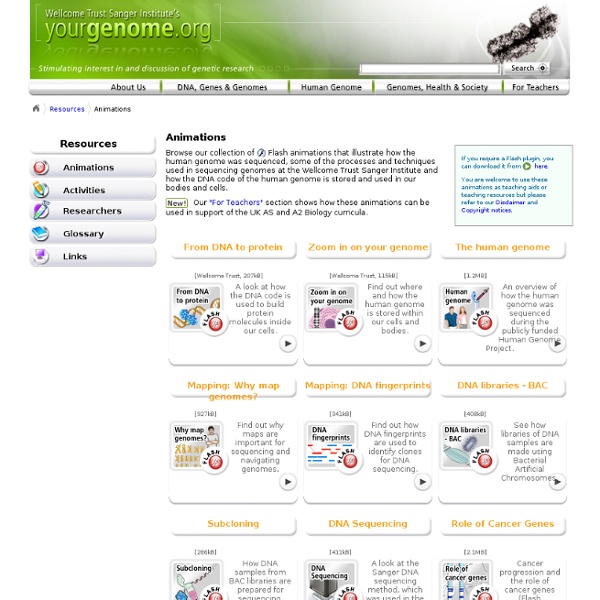 Browse our collection of Flash animations that illustrate how the human genome was sequenced, some of the processes and techniques used in sequencing genomes at the Wellcome Trust Sanger Institute and how the DNA code of the human genome is stored and used in our bodies and cells. Our "For Teachers" section shows how these animations can be used in support of the UK AS and A2 Biology curricula.

Peppered Moth Simulation Name:______________________________________________ Objective: Simulate changes in moth population due to pollution and predation, and observe how species can change over time. Introduction: Charles Darwin accumulated a tremendous collection of facts to support the theory of evolution by natural selection. One of his difficulties in demonstrating the theory, however, was the lack of an example of evolution over a short period of time, which could be observed as it was taking place in nature.

Kentucky Blues The story of an Appalachian malady, an inquisitive doctor, and a paradoxical cure. by Cathy Trost ©Science 82, November, 1982 Six generations after a French orphan named Martin Fugate settled on the banks of eastern 's Troublesome Creek with his redheaded American bride, his great-great-great great grandson was born in a modern hospital not far from where the creek still runs. The boy inherited his father's lankiness and his mother's slightly nasal way of speaking. TALE Toolbox Special Collections > TALEN kits > TALEN Kit #1000000019 Addgene is a non-profit plasmid repository. We archive and distribute high quality plasmids from your colleagues. Contact us to learn more. Transcription activator-like effectors (TALEs) are a class of naturally occurring DNA binding proteins that can be easily customized to recognize novel DNA sequences.The DNA binding domain of each TALE consists of tandem 34-amino acid repeat modules that can be rearranged according to a simple cipher to target new DNA sequences.

DNA . Genetics In the 150 years since Mendel's first experiments, geneticists have discovered that genetic traits usually don't follow simple inheritance patterns. Some traits, like human eye color and stature, are produced by the interplay of many sets of genes; these are known as "polygenic traits." Other traits show a phenomenon called intermediate expression, in which a heterozygous genotype will produce a phenotype that's different from homozygous dominant genotypes. In snapdragons, for example, a homozygous dominant genotype makes red flowers, homozygous recessive makes white flowers, and heterozygous individuals are pink. Acquired traits can be inherited via small RNAs Columbia University Medical Center (CUMC) researchers have found the first direct evidence that an acquired trait can be inherited without any DNA involvement. The findings suggest that Lamarck, whose theory of evolution was eclipsed by Darwin's, may not have been entirely wrong. The study is slated to appear in the Dec. 9 issue of Cell. "In our study, roundworms that developed resistance to a virus were able to pass along that immunity to their progeny for many consecutive generations," reported lead author Oded Rechavi, PhD, associate research scientist in biochemistry and molecular biophysics at CUMC.

Team:Freiburg/Project/Golden On this page, we introduce the Golden Gate Standard to the Registry of Standard Biological parts. We explain in detail, how Golden Gate Cloning works and how it can be made compatible with existing standards. Moreover, we provide step-by-step protocols for using this new standard. Introduction Although BioBrick assembly is a powerful tool for the synbio community because it allows standardized and simple construction of complex genetic constructs from basic genetic modules, it is not the best option when it comes to assembling larger numbers of modules in a short period of time. Furthermore, BioBrick assembly leaves scars between assembled parts, which is not optimal for protein fusion constructs.

Color Blind Chart Pattern baldness in men is a sex-influenced trait. It is not an X-linked trait like color blindness and hemophilia. Baldness is an autosomal trait and is apparently influenced by sex hormones after people reach 30 years of age or older. This condition is inherited as a simple Mendelian trait, although the biochemical mechanism is complex. There are other causes for baldness not related to simple Mendelian genetics, such as illness, severe stress, and pulling one's hair out by the roots. In men the gene is dominant, while in women it is recessive.

Quick Trait Calculator - Genetic Heredity Calculator Note These calculators use simplified models to calculate traits and their certainty is far from 100% due to the fact that human genetics is far more complex than a simple mendelian dominant/recessive model. Personal Report and Heredity Report give better results, providing that you had your genome sequenced by a commercial personal genomics companies like 23andMe, deCODEMe or Family Tree DNA. In any case, these reports do not substitute for clinical tests, genetic counseling or paternity/maternity tests.

Genetics Practice Problems Genetics Practice Problems You may type in your own answers, then check to see if you were right. If you’re totally stumped, you can tell the computer to show you the answer to a particular question. Monohybrid Cross: In humans, brown eyes (B) are dominant over blue (b)*. A brown-eyed man marries a blue-eyed woman and they have three children, two of whom are brown-eyed and one of whom is blue-eyed. 100 Years of Breed “Improvement” For the sake of honest disclosure, I will admit to owning “purebreds” (the ‘pureness’ of purebreeds is a discussion for another time) but I also have mutts. All the dogs I’ve had since childhood had a few things in common, they were friendly, prey driven, ball-crazy, intense, motivated, athletic (crazy dogs are easier to train) and none had intentionally bred defects. I would never buy/adopt a dog whose breed characteristics exacted a health burden.(Asher 2009). That just incentivizes people to breed more of these intentionally unhealthy animals.

'Moonlighting' Molecules Discovered; Researchers Uncover New Kink In Gene Control Since the completion of the human genome sequence, a question has baffled researchers studying gene control: How is it that humans, being far more complex than the lowly yeast, do not proportionally contain in our genome significantly more gene-control proteins? Now, a collaborative effort at the Johns Hopkins School of Medicine to examine protein-DNA interactions across the whole genome has uncovered more than 300 proteins that appear to control genes, a newly discovered function for all of these proteins previously known to play other roles in cells. The results, which appear in the October 30 issue of Cell, provide a partial explanation for human complexity over yeast but also throw a curve ball in what we previously understood about protein functions. The team set out to figure out which proteins encoded by the genome bind to which DNA sequences. One at a time, the team tested each of the 460 DNA sequences against the 4,200 protein-containing chip.

Genetic errors identified in 12 major cancer types Examining 12 major types of cancer, scientists at Washington University School of Medicine in St. Louis have identified 127 repeatedly mutated genes that appear to drive the development and progression of a range of tumors in the body. The discovery sets the stage for devising new diagnostic tools and more personalized cancer treatments.