?articles. MOOOOVE OVER TRADITIONAL BREEDING: Genetic profiling is changing the complexion of cattle breeding.HOLSTEIN ASSOCIATION USA A few days before the annual World Dairy Expo, bovine competitors start arriving so they can acclimate to the Wisconsin autumn after traveling, in some cases, thousands of miles. 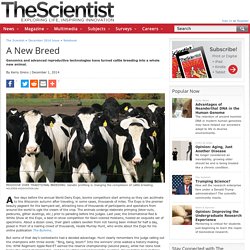 The Expo is the premier beauty pageant for the barnyard set, attracting tens of thousands of participants and spectators from around the world to ogle the cream of the crop. The animals undergo elaborate primping (blow-outs, pedicures, glitter dustings, etc.) prior to parading before the judges. Last year, the International Red & White Show at the Expo, a best-in-show competition for fawn-colored Holsteins, hosted an exquisite set of specimens.

About a dozen cows, their giant udders swollen from not having been milked for half a day, posed in front of a roaring crowd of thousands, recalls Murray Hunt, who wrote about the Expo for his online publication The Bullvine. Livestock Library - search Library for articles on Artificail Insemination. Artificial Insemination (AI) - Goats & Health - GOATWORLD.COM. 1) Is AI For You? 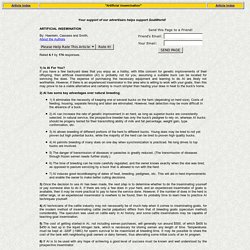 If you have a few backyard does that you enjoy as a hobby, with little concern for genetic improvements of their offspring, then artificial insemination (AI) is probably not for you, assuming a suitable buck can be located for servicing the does. The expense of purchasing the necessary equipment and learning to do AI are likely not worthwhile. However, if there is an experienced inseminator in the area who is willing to work with your goats, then this may prove to be a viable alternative and certainly is much simpler than hauling your does in heat to the buck's home. 2) AI has some key advantages over natural breeding. 1) It eliminates the necessity of keeping one or several bucks on the farm (depending on herd size). 3) Once the decision to use AI has been made, the next step is to determine whether to do the inseminating yourself or pay someone else to do it.

Improving Genetics With Reproductive Biotechnology: from BEEF Magazine. Today, like never before, reproductive biotechnology allows us to make rapid changes in the genetics of food and fiber producing animals. 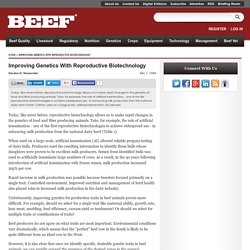 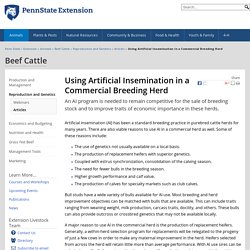 There are also viable reasons to use AI in a commercial herd as well. Some of these reasons include: The use of genetics not usually available on a local basis.The production of replacement heifers with superior genetics.Coupled with estrus synchronization, consolidation of the calving season.The need for fewer bulls in the breeding season.Higher growth performance and calf value.The production of calves for specialty markets such as club calves. Impact of reproductive technologies on improved genetics in beef cattle: [2006] Impact of using artificial insemination on the multiplication of high genetic merit beef cattle in Brazil : 2012. Using Artificial Insemination in a Commercial Breeding Herd — Beef Cattle. Genetic Trends in Austrlian Beef Cattle - making real progress. Bloodlines boost productivity in dairy industry - Landline - 3/09/00: Genes from improved bloodlines are helping to increase dairy industry productivity. 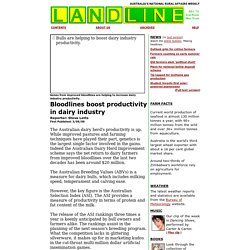 Bloodlines boost productivity in dairy industry Reporter: Steve Letts First Published: 3/09/00 The Australian dairy herd's productivity is up. While improved pastures and farming techniques have played their part, genetics is the largest single factor involved in the gains. Indeed the Australian Dairy Herd Improvement scheme says the net return to dairy farmers from improved bloodlines over the last two decades has been around $20 million.

For 25 years, they’ve used AI in both their commercial and purebred herds of Red Angus. They depend on it to provide genetic improvement as well as labor savings at calving time. Affordability of top genetics is a key benefit of AI. “We can use a $40,000 bull or spend $20 a unit of semen,” says Bruce. “It’s hard to justify going out and spending $40,000 on a bull.” When selecting AI sires, the Ketchums look beyond a bull’s expected progeny differences. “The type of cattle we’re trying to raise are not mainstream-type cattle,” says Ketchum. Of their 300 head of purebred cows, the Ketchums AI some 220 head annually. They also AI 200 head of registered and commercial yearling replacement heifers. “We synchronize the heifers and time-breed on one day,” says Ketchum. Chapter 8. Artificial Insemination and Genetics - Positioning Your Pork Operation for the 21st Century.

All files are in pdf format. 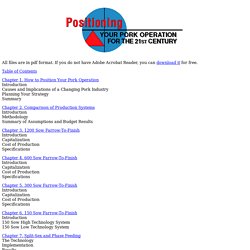 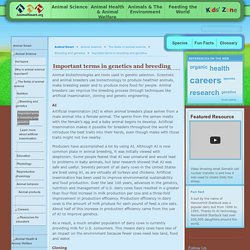