Asset. MATHEMATICAL PROOF IS NOT MINUTIAE AND IRREDUCIBLE COMPLEXITY IS NOT A THEORY: A FINAL RESPONSE TO BURT AND SIMONS AND A CALL TO CRIMINOLOGISTS - WRIGHT - 2015 - Criminology. The Fourth Law of Behavior Genetics. Current Directions in Psychological Sciencecdp.sagepub.com doi: 10.1177/0963721415580430 Current Directions in Psychological Science August 2015 vol. 24 no. 4 304-312 Christopher F. 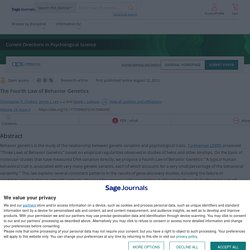 Chabris, Department of Psychology, Union College, 807 Union St., Schenectady, NY 12308 E-mail: chabris@gmail.com Author Contributions C. F. Chabris and J. Abstract Behavior genetics is the study of the relationship between genetic variation and psychological traits. Article Notes Declaration of Conflicting Interests The authors declared that they had no conflicts of interest with respect to their authorship or the publication of this article. . © The Author(s) 2015 Articles citing this article Immediate free access via SAGE Choice. Five Major Mental Disorders Share Genetic Roots. Five major mental disorders share some of the same genetic risk factors, the largest genome-wide study of its kind has found. 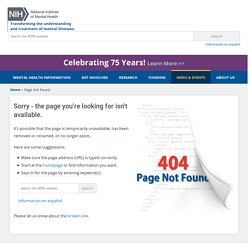 Evidence for such genetic overlap had previously been limited to pairs of disorders. National Institutes of Health-funded researchers discovered that people with disorders traditionally thought to be distinct – autism, ADHD, bipolar disorder, major depression and schizophrenia – were more likely to have suspect genetic variation at the same four chromosomal sites. These included risk versions of two genes that regulate the flow of calcium into cells. Source: Jordan Smoller, M.D., Massachusetts General Hospital “These results will help us move toward diagnostic classification informed by disease cause,” said Jordan Smoller, M.D. , of Massachusetts General Hospital, Boston, a coordinator of the study, which was supported by NIH’s National Institute of Mental Health. References Cross-Disorder Group of the Psychiatric Genomics Consortium.

Surprising variation among genomes of individual neurons from same brain. It was once thought that each cell in a person's body possesses the same DNA code and that the particular way the genome is read imparts cell function and defines the individual. 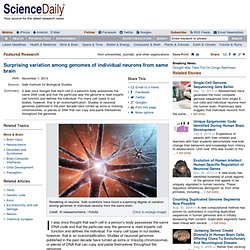 For many cell types in our bodies, however, that is an oversimplification. Studies of neuronal genomes published in the past decade have turned up extra or missing chromosomes, or pieces of DNA that can copy and paste themselves throughout the genomes. The only way to know for sure that neurons from the same person harbor unique DNA is by profiling the genomes of single cells instead of bulk cell populations, the latter of which produce an average. Now, using single-cell sequencing, Salk Institute researchers and their collaborators have shown that the genomic structures of individual neurons differ from each other even more than expected.

The findings were published November 1 in Science. Nutrition and the Epigenome. Epigenetics and the Human Brain. Throughout our lives, the brain remains flexible and responsive. 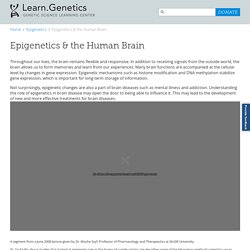 In addition to receiving signals from the outside world, the brain allows us to form memories and learn from our experiences. Many brain functions are accompanied at the cellular level by changes in gene expression. Epigenetic mechanisms such as histone modification and DNA methylation stabilize gene expression, which is important for long-term storage of information.

Not surprisingly, epigenetic changes are also a part of brain diseases such as mental illness and addiction. Understanding the role of epigenetics in brain disease may open the door to being able to influence it. A segment from a June 2008 lecture given by Dr. Dr. Epigenetics: How Your Mind Can Reprogram Your Genes. By Dr. 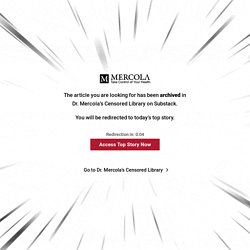 Mercola How much control do you really have over your own life in general, and your health in particular? These questions have puzzled many since the beginning of time. Now, the emerging science of epigenetics is offering some answers that put true control within your reach.According to some scientists, changing your health may be as "simple" as changing your thoughts and beliefs. DNA structure, Functions and properties. DNA Structure and Function. DNA Structure and Function Background History: 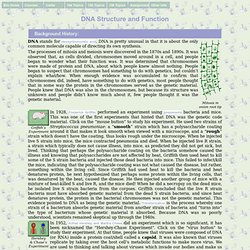 Marijuana stops child's severe seizures. Charlotte Figi had her first seizure when she was 3 months old. 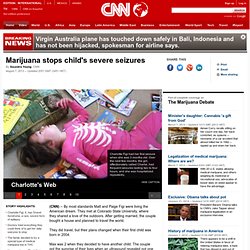 Over the next few months, the girl, affectionately called Charlie, had frequent seizures lasting two to four hours, and she was hospitalized repeatedly. By the time she was 3, Charlotte was having up to 300 grand mal seizures every week. Eventually she lost the ability to walk, talk and eat. The seizures were so severe Charlotte's heart stopped a number of times. Doctors suggested putting the child in a medically induced coma to give her small, battered body a rest. Her father, Matt Figi, found a similar case online in which medical marijuana helped a boy's seizures. 99.05.02: The Amazing DNA Molecule: Its History, Structure and Function.

Introduction This curriculum unit is intended for high school [college level or higher] biology students yet it can be modified to accommodate all learning backgrounds. 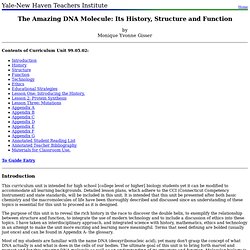 Detailed lesson plans, which adhere to the CCI (Connecticut Competency Instrument) and state standards, will be included in this unit. It is intended that this unit be presented after both basic chemistry and the macromolecules of life have been thoroughly described and discussed since an understanding of these topics is essential for this unit to proceed as it is designed.