StumbleUpon. The Rains of Castamere - Taylor Davis & Peter Hollens (Violin & A Cappella) Neil deGrasse Tyson sur Twitter : "His passing has left an intellectual vacuum in his wake. But it's not empty. Think of it as a kind of vacuum energy permeating the fabric of spacetime that defies measure. Stephen Hawking, RIP 1942-2018.…

TIMELAPSE OF THE ENTIRE UNIVERSE. TED - Happy Lunar New Year! What animal was assigned to... If Game Of Thrones was an anime. 100 Common Myths & Misconceptions. Sources and Notes: Weil. 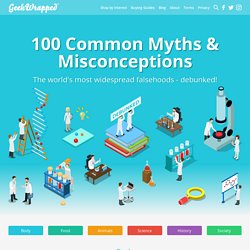 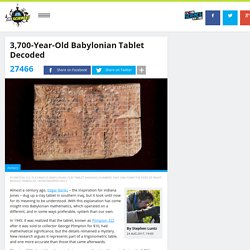 With this explanation has come insight into Babylonian mathematics, which operated on a different, and in some ways preferable, system than our own. In 1945, it was realized that the tablet, known as Plimpton 322 after it was sold to collector George Plimpton for $10, had mathematical significance, but the details remained a mystery. New research argues it represents part of a trigonometric table, and one more accurate than those that came afterwards. Plimpton 322's burial location in what was once the city of Larsa indicates it's 3,700 years old, dating from the time of Hammurabi, who established one the earliest surviving legal codes. “The huge mystery, until now, was its purpose – why the ancient scribes carried out the complex task of generating and sorting the numbers on the tablet,” Mansfield continued.

Watch: Understand How Quantum Computers Work in Minutes. Stop And Smell The Cherry Blossoms During Hanami In Japan. Each spring, the sakura bloom to display pastel pink hues throughout the entire country of Japan. 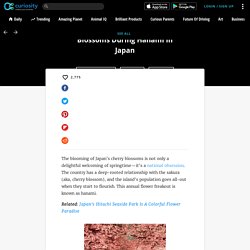 Viewing these flowers is the tradition of hanami, and it's a pretty huge deal. The word itself means to just view flowers (hana means "flower" and mi is "to look"). During hanami season, which last for a few weeks in March and April, people hold flower appreciation picnics under the cherry blossoms. Are Math Equations Beautiful? Euler's Identity Makes Mathematicians Swoon. Drumroll, please. Here is Euler's identity: eiπ + 1 = 0. Did you leave you breathless? Have you been swept off your feet? Are you sobbing tears of joy over its alluringly pure beauty? Okay, this may need an explanation. Game of Thrones Main Theme - Tina Guo. Unity's New Cyberpunk Short Film Is Stunning....and It Was Rendered in Real Time.

GRAMMY® AWARD WINNER- Winds of Samsara- Mahatma- Ricky Kej and Wouter Kellerman- Gandhi Tribute. Simon's Cat: Guide To Love. Assassin's Creed Movie Meets Parkour in Real Life - Day in the Life of a Stunt Man. An American Tragedy. The election of Donald Trump to the Presidency is nothing less than a tragedy for the American republic, a tragedy for the Constitution, and a triumph for the forces, at home and abroad, of nativism, authoritarianism, misogyny, and racism. 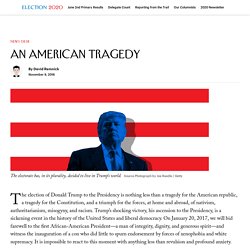 Trump’s shocking victory, his ascension to the Presidency, is a sickening event in the history of the United States and liberal democracy. On January 20, 2017, we will bid farewell to the first African-American President—a man of integrity, dignity, and generous spirit—and witness the inauguration of a con who did little to spurn endorsement by forces of xenophobia and white supremacy. It is impossible to react to this moment with anything less than revulsion and profound anxiety.

All along, Trump seemed like a twisted caricature of every rotten reflex of the radical right. In the coming days, commentators will attempt to normalize this event. Hoshino - Star Wars Fan Film. Kittens see / do things for the first time - Funny and cute cat compilation. Why Haven't Aliens Found Us Yet? Assassins Creed Black Flag Short Film. The End Of The Arctic. Kitten Olympics are in full swing. Malukah - Game of Thrones Theme & The Children Cover.

Malukah - I Follow the Moon. The Arena - Lindsey Stirling. A Guy Created Hilarious Fake Animal Facts & Put Them Up At The Zoo. If you've ever been to a zoo, you know that those little 'blurbs' on the animal signs can often go overlooked. 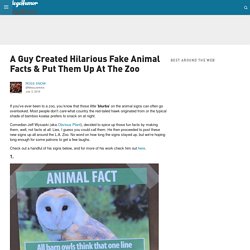 Most people don't care what country the red-tailed hawk originated from or the typical shade of bamboo koalas prefers to snack on at night. Comedian Jeff Wysaski (aka Obvious Plant), decided to spice up those fun facts by making them, well, not facts at all. Lies, I guess you could call them. He then proceeded to post these new signs up all around the L.A. Zoo. Insane Assassin's Creed III concept art by William Wu. If PRESIDENT Donald Trump Were 100% Honest With Us...

Beauty of the world 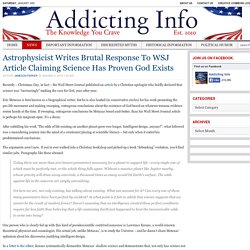 Eric Metaxas is best known as a biographical writer, but he is also lauded (in conservative circles) for his work promoting the pro-life movement and making sweeping, outrageous conclusions about the existence of God based on whatever tenuous evidence seems handy at the time. If sweeping, outrageous conclusions be Metaxas bread-and-butter, than his Wall Street Journal article is perhaps his magnum opus. It’s a doozy. After subtitling his work “The odds of life existing on another planet grow ever longer.

Intelligent design, anyone?” The arguments aren’t new. Today there are more than 200 known parameters necessary for a planet to support life—every single one of which must be perfectly met, or the whole thing falls apart. Feature image via The Conversation. Louie Schwartzberg: Hidden miracles of the natural world. Malukah - Game of Thrones Theme & The Children Cover. Body Painter Transforms Humans Into Breathtaking Portraits Of Animals. There’s more to this beautiful heron than meets the eye. 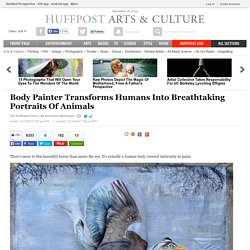 It’s actually a human body covered intricately in paint. The stunning work was created by artist Shannon Holt, a body painter from Florida who’s known for her ability to transform the human body into a canvas for beautiful art. The piece is part of Holt’s “Florida Wildlife Series,” a collection of several animal portraits, all painstakingly drawn on human bodies.

Each portrait is said to have taken Holt about six to 12 and a half hours to complete, according to Caters News. In a May interview with the Daytona Beach News-Journal, Holt explained what it is about body painting as a medium that she loves so much. “You can have a really beautiful work that transforms the body into a human sculpture or abstract piece that touches on art history, or is a master copy of an Italian Renaissance painting,” she told the news outlet. She added that she loves the “ephemeral” nature of body painting. Mirror's Edge Parkour POV. The Edge of Night (Pippin's Song) / In Dreams - Lord of the Rings cover by Malukah. Transcendence (Orchestral)- Lindsey Stirling. Stars Align - Lindsey Stirling (Original Song) All of Me - Jon Schmidt (The Official Video) Finally!