Videos / What Exactly is a Gene? - Stated Clearly. 4 minutes Published November 2012 Evolution Genetics Description You've probably heard about GMOs or Genetically Modified Organisms but what exactly is a gene and what does it mean to modify the genes of a plant or animal? 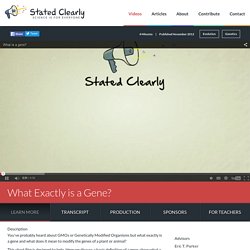 This short film is designed to help. Explore Further Advisors Eric T. Team Credits Jon Perry Jeremiah Deasey Anthony Danzl Similar Videos We think you will enjoy these videos too. Videos / What is DNA and How Does it Work? - Stated Clearly. Videos / How Does New Genetic Information Evolve? Part 1: Point Mutations - Stated Clearly. Description Point Mutations This film is the first of a two part series on the evolution of new genetic information. 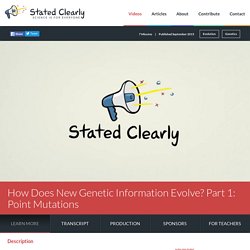 Here we focus on Point Mutations - the simplest natural mechanisms known to increase the genetic information of a population. Our second film of the series will focus on duplication events - natural mutations that increase the total amount of genetic information of an individual. Point mutations are small, natural edits in the DNA code of an individual. In this film you will see several examples of beneficial point mutations which have enhanced a creatures abilities or even given rise to entirely new abilities. 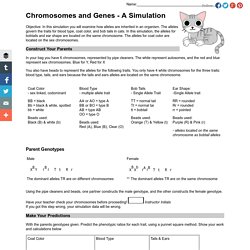 The alleles govern the traits for blood type, coat color, and bob tails in cats. In this simulation, the alleles for bobtails and ear shape are located on the same chromosome. The alleles for coat color are located on the sex chromosomes. Construct Your Parents In your bag you have 6 chromosomes, represented by pipe cleaners. You also have beads to represent the alleles for the following traits. Using the pipe cleaners and beads, one partner constructs the male genotype, and the other constructs the female genotype. Have your teacher check your chromosomes before proceeding!

Instructor Initials If you got this step wrong, your simulation data will be wrong. Make Your Predictions With the parents genotypes given. Run the Simulation As parents, you will contribute HALF of your genes to the offspring. Analysis 1. 2. 3. Learn.Genetics. Learn Genetics. Learn Genetics. Scientists Make DNA Wires That Carry Electric Current. DNA, the molecule at the heart of life, is the most powerful and sophisticated information storage device in existence. 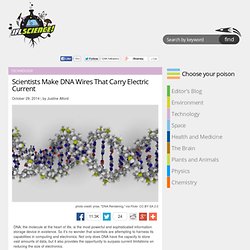 So it’s no wonder that scientists are attempting to harness its capabilities in computing and electronics. Not only does DNA have the capacity to store vast amounts of data, but it also provides the opportunity to surpass current limitations on reducing the size of electronics. Although we’ve drastically shrunk computers since their advent, scientists can only go so far because a minimum space between transistors-- the main building block of electronic devices-- is required to prevent interference. This means that processors can’t be designed much smaller than what we have around today. DNA could provide us with a unique way get around this, but unfortunately, scientists have faced a considerable challenge with using it in the field of “molecular electronics,” or the use of molecules in the production of electronic components. Synthetic biology - what should we be vibrating about?: Drew Endy at TEDxStanford. Scientists Design Biological Safety Switch For GMOs. In a bid to reduce the risk of genetically modified organisms escaping into the environment and disturbing natural ecosystems, two groups of scientists in the U.S. have rewritten the genetic code of bacteria to produce strains that are totally dependent on unnatural substances to grow. 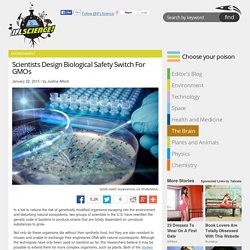 Not only do these organisms die without their synthetic food, but they are also resistant to viruses and unable to exchange their engineered DNA with natural counterparts. Although the techniques have only been used on bacteria so far, the researchers believe it may be possible to extend them for more complex organisms, such as plants.

Both of the studies can be found in the journal Nature. With advances in the fields of synthetic and molecular biology, genetically modified organisms (GMOs) have rapidly emerged as valuable solutions in a variety of clinical, industrial and environmental settings. [Via Nature News, Nature, Nature, Harvard, BBC News and PopSci] Genetically engineered crops - Science (10) - ABC Splash - Overview Explore how DNA and genes transmit heritable characteristics from one generation to the next. 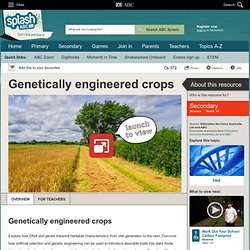 Discover how artificial selection and genetic engineering can be used to introduce desirable traits into plant foods. Use video clips to explore the arguments for and against genetically engineered crops.Examine different perspectives and opinions on genetically modified (GM) foods. Duration: Source : Education Services Australia Ltd and ABC Learning area: Science Secondary: Year 10 About this resource Acknowledgements Program: Education Services Australia Ltd and ABC Cite this resource You can use this information to reference this item.

Bibliographic details for 'Genetically engineered crops': 1-GMfoods. Explore how DNA and genes transmit heritable characteristics from one generation to the next. 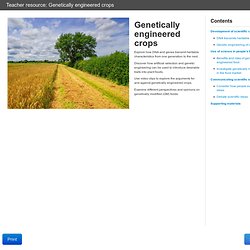 Discover how artificial selection and genetic engineering can be used to introduce desirable traits into plant foods. Use video clips to explore the arguments for and against genetically engineered crops. Examine different perspectives and opinions on genetically modified (GM) foods. Area of focus: Development of scientific concepts Topic 1: DNA transmits heritable characteristics Learning intention: to know that DNA transmits instructions to new cells.