Helping you discover more about DNA, genes and genomes, and the implications for our health and society. 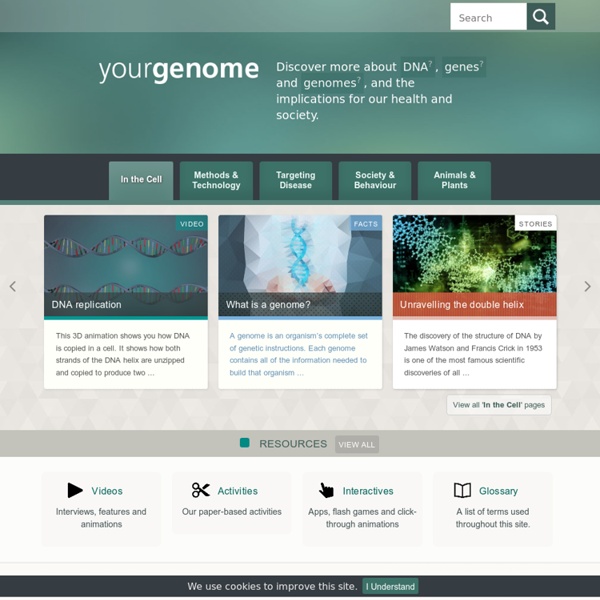 Genetic Science Learning Center Launch Tool The Genetic Science Learning Center is a great place to visit to explore and learn about cells, heredity, DNA, genes, natural selection, etc. The Learn.Genetics part of the site is geared to students, teachers, and the general public. It delivers educational materials on genetics, bioscience, and health topics. The homepage is divided into three main sections: Basics, New & Popular, and a section that highlights a variety of topics, from genetic technology to the new science of addiction. The site uses videos, animations, and interactives to help you explore the different topics.

Blood Vessels: Capillaries Unlike the arteries and veins, capillaries are very thin and fragile. The capillaries are actually only one epithelial cell thick. They are so thin that blood cells can only pass through them in single file. The exchange of oxygen and carbon dioxide takes place through the thin capillary wall. The red blood cells inside the capillary release their oxygen which passes through the wall and into the surrounding tissue. Cell Cycle & Cytokinesis - BioChemWeb.org Cell Cycle Regulation and the Control of Cell Proliferation (Cell Growth + Cell Division) Cell Cycle Research - General resource with links to relevant recent literature, news and job listings. (Ion Channel Media Group) Cell Division - Undergraduate-level lectures on cell division.

Cloning & Synthetic Biology Overview of Traditional Cloning Traditional Cloning refers to the generation of DNA fragments using restriction enzymes, and their subsequent assembly and transformation. The name is derived from the method’s history as the first widely-accepted cloning method. Sleep & Gene Expression Photo Credit: Clipart.com Just one week of sleep deprivation alters the expression of at least 711 different genes. Transcript

Scientists sequence Black Death bacteria DNA, admit they were wrong The bacteria behind the Black Death has a very unusual history. Its ancestor is an unassuming soil bacterium and the current strains of Yersinia pestis still infects thousands of people annually, but no longer cause the suite of horrifying symptoms associated with the medieval plagues. The radical differences between the two versions, in fact, led some to suggest that we have been blaming the wrong bacteria. Acquired traits can be inherited via small RNAs Columbia University Medical Center (CUMC) researchers have found the first direct evidence that an acquired trait can be inherited without any DNA involvement. The findings suggest that Lamarck, whose theory of evolution was eclipsed by Darwin's, may not have been entirely wrong. The study is slated to appear in the Dec. 9 issue of Cell. "In our study, roundworms that developed resistance to a virus were able to pass along that immunity to their progeny for many consecutive generations," reported lead author Oded Rechavi, PhD, associate research scientist in biochemistry and molecular biophysics at CUMC. "The immunity was transferred in the form of small viral-silencing agents called viRNAs, working independently of the organism's genome." In an early theory of evolution, Jean Baptiste Larmarck (1744-1829) proposed that species evolve when individuals adapt to their environment and transmit those acquired traits to their offspring.

A Mendel Seminar Photo Credit: Clipart.com Purpose To learn about Gregor Mendel's discovery of a process of biological evolution: how recessive and dominant traits are passed from one generation of living organisms to the next. Context Forget the ice chest, this donor heart comes warm and still beating in a box If you think about it, it’s strange that we keep to-be-transplanted human hearts in the same thing that we keep our Coronas in when we head to the beach. There must be a better way than sticking the heart on ice and flying it to its recipient. The heart can only be kept on ice for about six hours, so private jets, helicopters, and ambulances have to rush the heart to its recipient as fast as they can. However, TransMedics has created what it calls a self-contained Organ Care System. Unlike normal transplantats which involves a donor heart being stopped, put on ice, and then transported in a cooler, the new strategy transports the still warm and beating heart in a box. The technology takes the organ out of the donor, and puts it on a platform where it continues to pump the donor blood into the heart while maintaining it in a near physiologic state in a warm, beating state during the transport.

From gene to function: Genome wide study into new gene functions in the formation of platelets In a study into the genetics of blood cell formation, researchers have identified 68 regions of the genome that affect the size and number of platelets. Platelets are small cells that circulate in the blood and are key to the processes of blood clotting and wound healing. In this genome-wide study, the team used a multidisciplinary approach to successfully identify new genetic variants involved in the formation of platelets and more importantly, defined the function of genes near these variants using a series of biological analyses.

Concord Consortium Research Overview Geniverse research is being led by our research partner, BSCS, with assistance from our evaluator partner, TERC. Our research study is examining how the Geniverse materials affect students’ genetics content knowledge and abilities to engage in scientific argumentation. In addition to pre- and post-tests for content knowledge, we will measure both student motivation and the degree of fidelity of implementation of Geniverse. Student demographic variables (race/ethnicity and gender) are being collected to examine if the Geniverse materials provide equitable opportunities for students to learn. Intravenous virus eyed as possible cancer treatment - Health Scientists from the Ottawa Hospital Research Institute have succeeded in delivering a virus intravenously that only attacks cancer tumours and doesn't harm healthy tissues, according to a new study in the scientific journal Nature. Dr. John Bell, a senior scientist at OHRI and senior co-author of the study, said the investigators were trying to demonstrate that it is possible to deliver such a virus intravenously in people.

Those Old Kentucky Blues Teaching Notes Case teaching notes are password-protected and access to them is limited to paid subscribed instructors. To become a paid subscriber, begin the process by registering here. Teaching notes are intended to help teachers select and adopt a case. They typically include a summary of the case, teaching objectives, information about the intended audience, details about how the case may be taught, and a list of references and resources.