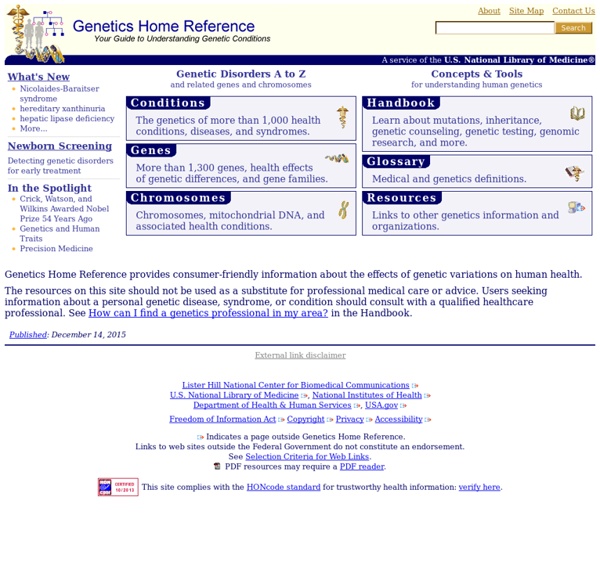 Genomics > Table of Pharmacogenomic Biomarkers in Drug Labeling Pharmacogenomics can play an important role in identifying responders and non-responders to medications, avoiding adverse events, and optimizing drug dose. Drug labeling may contain information on genomic biomarkers and can describe: Drug exposure and clinical response variabilityRisk for adverse eventsGenotype-specific dosingMechanisms of drug actionPolymorphic drug target and disposition genes The table below lists FDA-approved drugs with pharmacogenomic information in their labeling. All About The Human Genome Project (HGP) All About The Human Genome Project (HGP) The Human Genome Project (HGP) was one of the great feats of exploration in history - an inward voyage of discovery rather than an outward exploration of the planet or the cosmos; an international research effort to sequence and map all of the genes - together known as the genome - of members of our species, Homo sapiens. Completed in April 2003, the HGP gave us the ability, for the first time, to read nature's complete genetic blueprint for building a human being.

Cracking the Code of Life Cracking the Code of Life PBS Airdate: April 17, 2001 ROBERT KRULWICH: When I look at this—and these are the three billion chemical letters, instructions for a human being—my eyes glaze over. But when scientist Eric Lander looks at this he sees stories. Resources, Animations, Interviews, + Tools We are enhancing our most popular resources by building collections around them. First up: Polymerase Chain Reaction! The DNA Learning Center has been developing multimedia animation programs since 1990. These popular programs feature some of the most common molecular processes such as PCR, sequencing, and DNA restriction. View online or download for play from your computer.

PeerWise Welcome to PeerWise To log in, select your school / institution from the list below Sorry, I don't know about that place. Please type a few characters in the box below and then select your institution from the list. Just type the first few characters... PeerWise supports students in the creation, sharing, evaluation and discussion of assessment questions. Chromosome Abnormalities Fact Sheet Chromosome Abnormalities What are chromosomes? Chromosomes are the structures that hold genes. Genes are the individual instructions that tell our bodies how to develop and function; they govern physical and medical characteristics, such as hair color, blood type and susceptibility to disease. Allergy and Infectious Diseases The National Institute of Allergy and Infectious Diseases (NIAID) conducts and supports basic and applied research to better understand, treat, and ultimately prevent infectious, immunologic, and allergic diseases. For more than 60 years, NIAID research has led to new therapies, vaccines, diagnostic tests, and other technologies that have improved the health of millions of people in the United States and around the world. NIAID is one of the 27 Institutes and Centers of the National Institutes of Health (NIH).

The Fruit Fly and Genetics Personals: ♀ FF, Se/E/Dp, seeks ♂ FF, +/+/+ for short term relationship. Enjoys romance, fermentation, and long walks on the peach... You know those annoying little bugs that like to get in your fruit if you leave it on the counter? Well they're called Drosophila melanogaster (or just fruit flies) and they've been used to study genetics for over 100 years. This interactive website is designed to introduce biology students to research on model organisms while reviewing genetics basics. Learning about Genetics Using Flies

Social Media Push to Get Experimental Drugs on the Rise <br/><a href=" more news videos</a> | <a href=" from the US</a> Copy For a growing number of gravely ill patients running out of options, social media has become their last bastion of hope. And they're sharing their private struggles to motivate public action.