Why Clone? If you really wanted to, and if you had enough money, you could clone your beloved family cat. 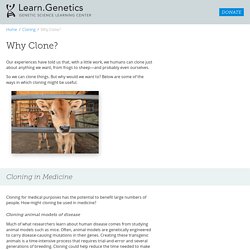 At least one biotechnology company in the United States has offered cat cloning services for the privileged and bereaved. But don't assume that your cloned kitty will be exactly the same as the one you know and love. An individual is a product of more than its genes—the environment plays an important role in shaping personality and many other traits. On December 22, 2001, a kitten named CC made history as the first cat—and the first domestic pet—ever to be cloned. CC and Rainbow, the donor of CC's genetic material, are pictured at the right.

But do you notice something odd about this picture? The answer lies in the X chromosome. Very early in her development, each of Rainbow's cells "turned off" oneentire X chromosome, thereby turning off either the black or the orange color gene. So like all female mammals, Rainbow developed as a mosaic. Cloning Fact Sheet - National Human Genome Research Institute (NHGRI) Cloning What is cloning? 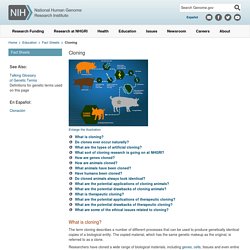 The term cloning describes a number of different processes that can be used to produce genetically identical copies of a biological entity. The copied material, which has the same genetic makeup as the original, is referred to as a clone. Researchers have cloned a wide range of biological materials, including genes, cells, tissues and even entire organisms, such as a sheep. Top of page Do clones ever occur naturally? Yes. Natural clones, also known as identical twins, occur in humans and other mammals. Farm animal cloning factsheet formatted. Cloning. 20 Years after Dolly the Sheep Led the Way&mdash;Where Is Cloning Now? It was a glorious day in the hills above Edinburgh, Scotland, when old friends and scientific colleagues Ian Wilmut and Alan Trounson set off on a hike two decades ago. 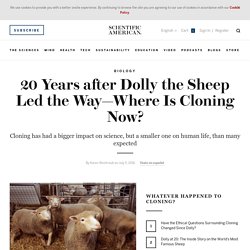 High over the city, Wilmut confided that he had a secret to share. As part of a larger study, he and several co-workers had successfully birthed a lamb in the lab—not from egg and sperm but from DNA taken from an adult sheep’s mammary gland. They had cloned a mammal. “Crikey, I was stunned,” says Trounson, who is now—as then—a stem cell biologist at Monash University in Melbourne, Australia. He remembers sitting down hard on a nearby stone. Cloning a mammal defied the scientific dogma of its time. In 2016 cloning a person remains unfeasible, with no scientific benefit and an unacceptable level of risk, several scientists say. Cloning’s biggest impact, several researchers say, has been in the stem cell advances it has sparked.

Wilmut admits Dolly’s birth was a lucky accident. CGS : Background: Cloned and Genetically Modified Animals. Several animal species have already been genetically modified, and at least eleven have been cloned, though some scientists doubt the health of those clones that survived to birth. 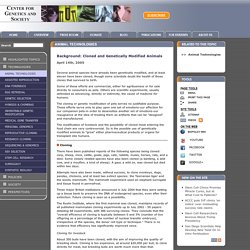 Some of these efforts are commercial, either for agribusiness or for sale directly to consumers as pets. Others are scientific experiments, usually defended as advancing, directly or indirectly, the cause of medicine for humans. The cloning or genetic modification of pets serves no justifiable purpose. These efforts serve only to play upon one set of emotions-our affection for our companion pets-in order to desensitize another set of emotions-our repugnance at the idea of treating them as artifacts that can be "designed" and manufactured. The modification of livestock and the possibility of cloned meat entering the food chain are very controversial. 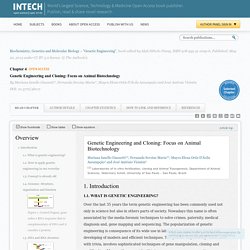 After isolated and purified the DNA target sequence must be mounted on an appropriate carrier molecule, the cloning vector. A cloning vector is a small piece of DNA into which a foreign DNA is inserted for transfer or propagation in an organism, with the ability to self-replicate. The purpose of a vector is to allow efficient high-level expression of cloned genes or still, the need to increase the number of copies of a recombinant DNA [28]. 6.2. Cloning vectors In principle, any molecule of DNA that can replicate itself inside a cell system could work as a cloning vector, but many factors as, small sizes, mobility between cells, easy production and detection mechanism should be considered [28].