Genetics and the roles Mendel, Watson, Crick and Franklin

Gregor Mendel and the Principles of Inheritance. Our modern understanding of how traits may be inherited through generations comes from the principles proposed by Gregor Mendel in 1865. 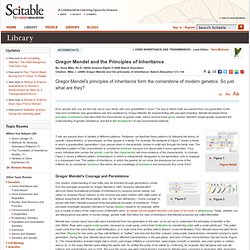 However, Mendel didn't discover these foundational principles of inheritance by studying human beings, but rather by studying Pisum sativum, or the common pea plant. Indeed, after eight years of tedious experiments with these plants, and—by his own admission—"some courage" to persist with them, Mendel proposed three foundational principles of inheritance. These principles eventually assisted clinicians in human disease research; for example, within just a couple of years of the rediscovery of Mendel's work, Archibald Garrod applied Mendel's principles to his study of alkaptonuria. Today, whether you are talking about pea plants or human beings, genetic traits that follow the rules of inheritance that Mendel proposed are called Mendelian. Gregor Mendel - Biography - Botanist, Scientist - Biography.com. Gregor Mendel was an Austrian monk who discovered the basic principles of heredity through experiments in his garden. 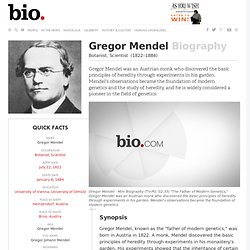 Mendel's observations became the foundation of modern genetics and the study of heredity, and he is widely considered a pioneer in the field of genetics. Synopsis Gregor Mendel, known as the "father of modern genetics," was born in Austria in 1822. 'Lost' Letters Reveal Twists in Discovery of Double Helix. 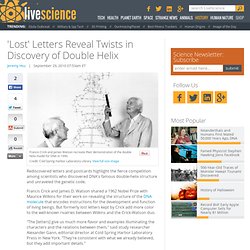 Francis Crick and James D. Watson shared a 1962 Nobel Prize with Maurice Wilkins for their work on revealing the structure of the DNA molecule that encodes instructions for the development and function of living beings. But formerly lost letters kept by Crick add more color to the well-known rivalries between Wilkins and the Crick-Watson duo. "The [letters] give us much more flavor and examples illuminating the characters and the relations between them," said study researcher Alexander Gann, editorial director at Cold Spring Harbor Laboratory Press in New York. "They're consistent with what we already believed, but they add important details. " A fourth researcher credited with initial DNA work, Rosalind Franklin, died of cancer in 1958 and was never nominated for a Nobel Prize. Rival labs.

History - Historic Figures: Watson and Crick (1928- ) The Francis Crick Papers: The Discovery of the Double Helix, 1951-1953. Follow Profiles in Science on Pinterest! 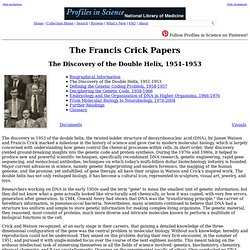 The discovery in 1953 of the double helix, the twisted-ladder structure of deoxyribonucleic acid (DNA), by James Watson and Francis Crick marked a milestone in the history of science and gave rise to modern molecular biology, which is largely concerned with understanding how genes control the chemical processes within cells. In short order, their discovery yielded ground-breaking insights into the genetic code and protein synthesis. During the 1970s and 1980s, it helped to produce new and powerful scientific techniques, specifically recombinant DNA research, genetic engineering, rapid gene sequencing, and monoclonal antibodies, techniques on which today's multi-billion dollar biotechnology industry is founded.

James Watson, Francis Crick, Maurice Wilkins, and Rosalind Franklin. In the video below, Jacqueline Boytim explains how spectrophotometers historically have been used by chemists to understand the structure of atoms. 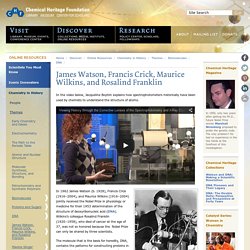 Maurice Wilkins with X-ray crystallographic equipment about 1954. Courtesy King’s College London and Horace Freeland Judson. In 1962 James Watson (b. 1928), Francis Crick (1916–2004), and Maurice Wilkins (1916–2004) jointly received the Nobel Prize in physiology or medicine for their 1953 determination of the structure of deoxyribonucleic acid (DNA). Wilkins’s colleague Rosalind Franklin (1920–1958), who died of cancer at the age of 37, was not so honored because the Nobel Prize can only be shared by three scientists. Crick writes his 12-year-old son about DNA model. On February 28th, 1953, Francis Crick and James Watson figured out that DNA had a double-helix structure by creating a model out of bits of stuff in the lab and comparing it to X-ray diffraction data collected by X-ray crystallographer Rosalind Franklin and molecular biologist Maurice Wilkins. 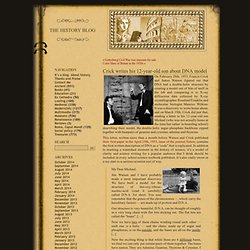 It was a discovery to write home about, and on March 19th, Crick did just that, sending a letter to his 12-year-old son Michael (who was not actually home at the time but rather in boarding school) describing their model, the double-helix sugar-phosphate backbone zipped together with basepairs of guanine and cytosine, adenine and thymine. This letter, written more than a month before Watson and Crick published their first paper in the April 25th, 1953, issue of the journal Nature, contains the first written description of DNA as a “code” that is replicated. My Dear Michael,Jim Watson and I have probably made a most important discovery. The little boy is 72 now and kept the letter for 60 years. The Discovery of the Molecular Structure of DNA - The Double Helix. A Scientific Breakthrough The sentence "This structure has novel features which are of considerable biological interest" may be one of science's most famous understatements. 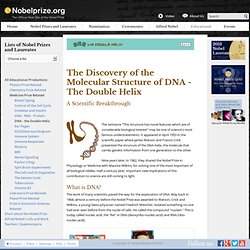