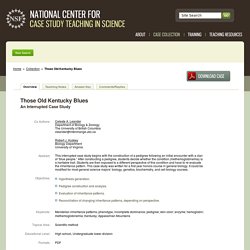 To become a paid subscriber, begin the process by registering here. Teaching notes are intended to help teachers select and adopt a case. They typically include a summary of the case, teaching objectives, information about the intended audience, details about how the case may be taught, and a list of references and resources. Download Teaching Notes Answer Key Answer keys for the cases in our collection are password-protected and access to them is limited to paid subscribed instructors. Get Answer Key. 1170L Artificial Selection. Actualizar el navegador para usar Google Drive - Ayuda de Drive. 1_ProteinEngageFull - Google Slides. Untitled document. Helping you discover more about DNA, genes and genomes, and the implications for our health and society. 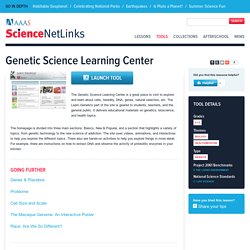 The Learn.Genetics part of the site is geared to students, teachers, and the general public. It delivers educational materials on genetics, bioscience, and health topics. Sleep & Gene Expression. Photo Credit: Clipart.com Just one week of sleep deprivation alters the expression of at least 711 different genes. 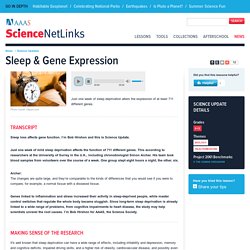 Transcript Sleep loss affects gene function. A Mendel Seminar. Photo Credit: Clipart.com Purpose To learn about Gregor Mendel's discovery of a process of biological evolution: how recessive and dominant traits are passed from one generation of living organisms to the next. 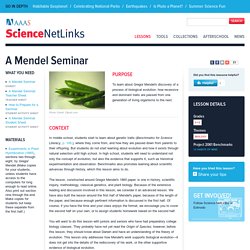 Context In middle school, students start to learn about genetic traits (Benchmarks for Science Literacy, p. 108.), where they come from, and how they are passed down from parents to their offspring. PEDIGREEQUIZ. ProteinSynthesisSummary. Origami inst. Reading 20DNA. Comments. Dogs Decoded Unit - Mr. Rott's Science Room. Untitled. NIH finally makes good with Henrietta Lacks' family. Over the past six decades, huge medical advances have sprung from the cells of Henrietta Lacks, a poor, African-American mother of five who died in 1951 of cervical cancer. 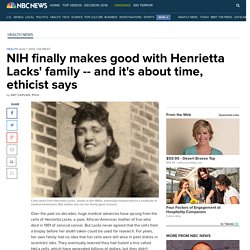 But Lacks never agreed that the cells from a biopsy before her death taken could be used for research. For years, her own family had no idea that her cells were still alive in petri dishes in scientists' labs. They eventually learned they had fueled a line called HeLa cells, which have generated billions of dollars, but they didn't realize until this spring that her genome had been sequenced and made public for anyone to see.

On Tuesday, the National Institute of Health announced it was, at long last, making good with Lacks' family. DNA Learning Center. Learn Genetics. Air Pollution Causes Epigenetic Changes That May Trigger Asthma. Once Nadeau understood the role of the methyl groups in gene expression, all the dots began to connect. 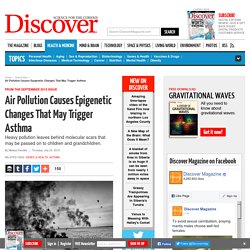 She believed that air pollution triggered asthma in her Fresno patients by tagging Foxp3 in immature T cells with methyl groups, switching off its expression. This prevents the cells from maturing into those police officer T-regs that hold T helper cells in check. More exposure to pollution, then, would mean more methyl groups. As it turned out, Foxp3 bore the fewest methyl groups in Palo Alto children without asthma, and more in Palo Alto children with the disease. Study of Holocaust survivors finds trauma passed on to children's genes. Genetic changes stemming from the trauma suffered by Holocaust survivors are capable of being passed on to their children, the clearest sign yet that one person’s life experience can affect subsequent generations. 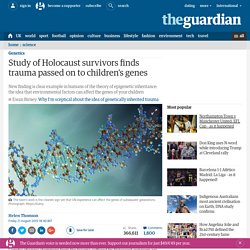 They also analysed the genes of their children, who are known to have increased likelihood of stress disorders, and compared the results with Jewish families who were living outside of Europe during the war. “The gene changes in the children could only be attributed to Holocaust exposure in the parents,” said Yehuda. Her team’s work is the clearest example in humans of the transmission of trauma to a child via what is called “epigenetic inheritance” - the idea that environmental influences such as smoking, diet and stress can affect the genes of your children and possibly even grandchildren.

The idea is controversial, as scientific convention states that genes contained in DNA are the only way to transmit biological information between generations. Todd Kenyon TST 2016.

From Gene to Protein. Inheritance. Biotechnology. Ghost in Your Genes. Geniverse. Research Overview Geniverse research is being led by our research partner, BSCS, with assistance from our evaluator partner, TERC. 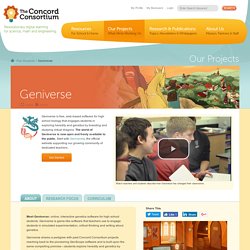 Our research study is examining how the Geniverse materials affect students’ genetics content knowledge and abilities to engage in scientific argumentation. In addition to pre- and post-tests for content knowledge, we will measure both student motivation and the degree of fidelity of implementation of Geniverse. Student demographic variables (race/ethnicity and gender) are being collected to examine if the Geniverse materials provide equitable opportunities for students to learn. We are also examining the affects of a range of teacher characteristics (years using Geniverse, familiarity with instructional technologies, genetics background and experience with scientific argumentation pedagogies) on student outcomes.