Understanding DNA: Five key scientists who unravelled the helix. William Astbury Astbury was a British molecular biologist and physicist who spent much of his working life in Leeds. 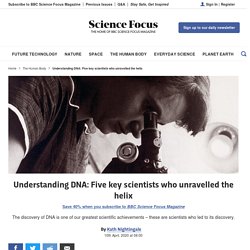 His work focused originally on the structure of proteins in textiles but, along with his PhD student Florence Bell, he took the first X-ray photographs of DNA in 1937. Science Focus Podcast: Is gene editing inspiring or terrifying? In 2012, scientists developed a method to edit any part of the human genome, and the implications were astounding. 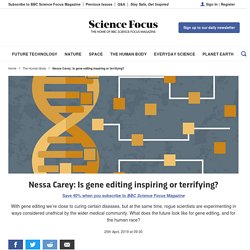 Now, we’re starting to see the technology’s potential; we will soon cure previously untreatable diseases, but at the same time, rogue scientists are experimenting in ways considered unethical by the wider medical community. So where does gene editing go from here? In this week’s Science Focus Podcast, Nessa Carey, author of the book Hacking the Code Of Life: How gene editing will rewrite our futures (£12.99, Icon) explains how gene editing was developed, how it works, and why it holds so much promise for medical science. Personalised medicine is coming, here's how it'll help us beat disease.

Modern medicine, for all its wonders, has a rather large blind spot. 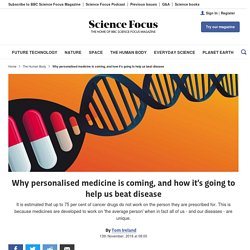 Though scientific breakthroughs and new miracle treatments are announced on a seemingly daily basis, doctors know that even the most effective drugs in their arsenal won’t work for large sections of the population. For example, the drugs commonly prescribed to treat disorders like depression, asthma and diabetes are ineffective for around 30-40 per cent of people they are prescribed to.

With hard to treat diseases like arthritis, Alzheimer’s and cancer, the proportion of the population who see no benefit from a particular treatment rises to 50-75 per cent. The problem stems from how treatments are developed. What Happens When You Put 500,000 People's DNA Online. This spring, 11 years after the first volunteer gave up a tube of blood, U.K. 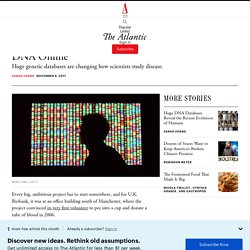 Biobank announced it would release its full genetic data set to registered scientists in July. This huge amount of genetic information, combined with the thousands of other characteristics tracked by U.K. Genetic testing. Identical Twins are Living Epigenetic Experiments. How accurate are home DNA kits? Last fall, I took a DNA ancestry test from MyHeritage and was surprised to learn that somewhere in my background I have Native American roots. 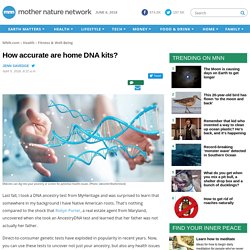 That's nothing compared to the shock that Robyn Porter, a real estate agent from Maryland, uncovered when she took an AncestryDNA test and learned that her father was not actually her father. Direct-to-consumer genetic tests have exploded in popularity in recent years. DNA is not our destiny; it’s just a very useful tool.

The cost of DNA sequencing continues to fall, and the scale and reach of genetic research continues to grow with it. 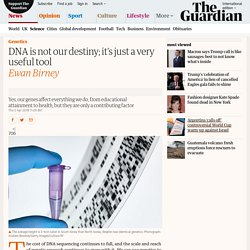 We can use genetics to study not just health and fundamental biology but many things humans do – education, behaviours, parenting skills – leading to interesting scientific papers and sometimes breathless headlines in the mainstream press. But what can DNA really tell us about our potential and our behaviours? Is the science sound? How should society use this knowledge?

Broadly speaking, yes, the science is sound. Module 5: Personalized Medicine - Teach the Microbiome. 23andMe Wants You to Share Even More Health Data. How 23andMe Won Back the Right to Foretell Your Diseases. Your DNA guides the plot for the story of you. 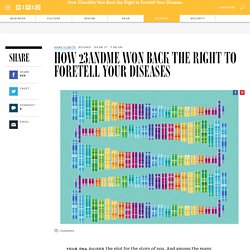 And among the many important spoilers it contains is whether you are likely to contract certain diseases—things like Alzheimer’s, Parkinson’s, and celiac. On Thursday, the FDA approved genetic testing company 23andMe to sell customers foreshadowing about their susceptibility to these, and seven other heritable genetic traits. The Call-In: DNA Testing. Time now for The Call-In - last week, we asked you about your experiences with DNA testing kits. 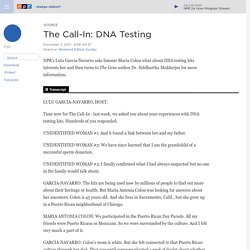 Hundreds of you responded. UNIDENTIFIED WOMAN #1: And it found a link between her and my father. UNIDENTIFIED WOMAN #2: We have since learned that I am the grandchild of a successful sperm donation. UNIDENTIFIED WOMAN #3: I finally confirmed what I had always suspected but no one in the family would talk about. GARCIA-NAVARRO: The kits are being used now by millions of people to find out more about their heritage or health. Promising New Cancer Immunotherapies Have Arrived—But Not For Everyone. This incredible footage shows CRISPR editing DNA in real time. New CRISPR tools enable extraordinarily precise gene editing in human cells. Over just a few short years the CRISPR gene-editing technique has revolutionized science, affecting everything from medicine to agriculture. 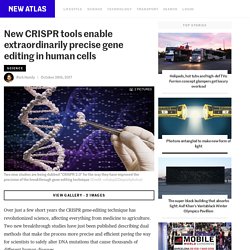 Two new breakthrough studies have just been published describing dual methods that make the process more precise and efficient paving the way for scientists to safely alter DNA mutations that cause thousands of different human diseases. CRISPR is conventionally a cut-and-paste tool allowing scientists to chop out unwanted strands of DNA and insert new genes, but a large volume of human diseases are caused by a single point mutation somewhere in a person's DNA.

Up until now scientists have not been able to simply and directly erase or rewrite these single mutations in living human cells. Our human genome consists of 3 billion base pairs made up of chemical units referred to by the letters A, C, G and T. There are 50,000 known genetic mutations that are linked to disease in humans and 32,000 of these are single point mutations. Americans don't know obesity is a major cancer risk factor. Introduction to CRISPR Genome Editing. CRISPR Is on the Cusp of Eradicating a Host of Diseases. Using CRISPR The CRISPR/Cas9 gene editing tool has had a busy year. 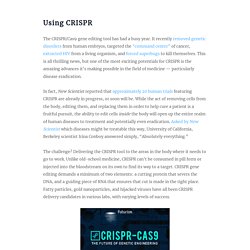 It recently removed genetic disorders from human embryos, targeted the “command center” of cancer, extracted HIV from a living organism, and forced superbugs to kill themselves. This is all thrilling news, but one of the most exciting potentials for CRISPR is the amazing advances it’s making possible in the field of medicine — particularly disease eradication. 23andMe is getting serious about drug development — and it could signal a fresh approach to finding new medicines. 23andMe CEO Anne Wojcicki. Brad Barket/Getty 23andMe, a company known for its consumer genetics test, is also looking to develop new drugs. The company raised $250 million on Tuesday, and the funding will in part go toward drug development.

23andMe Is Digging Through Your Data for a Parkinson's Cure. Warnings over shock dementia revelations from ancestry DNA tests. People who use genetic tests to trace their ancestry only to discover that they are at risk of succumbing to an incurable illness are being left to suffer serious psychological problems. Dementia researchers say the problem is particularly acute for those found to be at risk of Alzheimer’s disease, which has no cure or effective treatment. Yet these people are stumbling upon their status inadvertently after trying to find their Viking, Asian or ancient Greek roots. What can genetic testing really tell you? Gizmodo. גנטיקה אבולוציונית אנושית. ראש בראש: הבדיקות הגנומיות לסרטן. המרכז המוביל לבדיקות גנטיות. אונקוטסט. Does Gene Testing Spur Healthier Habits? Maybe Not. Photo Would knowing you are at high genetic risk for developing a disease like diabetes motivate you to live a healthier life?

Photo Genetic tests for an inherited heart disorder are more likely to have incorrect results in black Americans than in whites, according to a new study that is likely to have implications for other minorities and other diseases, including . Mistakes have been made because earlier research linking genetic traits to illness did not include enough members of minority groups to identify differences between them and the majority white population or to draw conclusions about their risks of disease.

The new study, published Wednesday in The , focused on — a thickening of the wall of the heart that can cause abnormal rhythms and sudden death. The condition often has no symptoms, but can cause young athletes to pass out or even die during the intense activity of their sport. It can be caused by inherited mutations in one of 10 to 20 genes, and affects one in 500 people in the United States. Richard Resnick: Welcome to the genomic revolution.

In the central nervous system, APOE is mainly produced by astrocytes, and transports cholesterol to neurons via APOE receptors, which are members of the low density lipoprotein receptor gene family.[2] This protein is involved in Alzheimer’s disease and cardiovascular disease.[3] Structure[edit] Gene[edit] Protein[edit] Early-onset Alzheimer's disease. Answer three questions and help us improve Wikipedia. בדיקות סקר נשאות למחלות גנטיות. Figure 3 : Apolipoprotein E and its receptors in Alzheimer's disease: pathways, pathogenesis and therapy : Nature Reviews Neuroscience. What-I-learned-About-Heart-Disease. First, I want to say that I am NOT a doctor. I am a petroleum geologist that was stricken with heart disease in 2007 at a very young age of 48. I exercised 5 days a week, I followed the American Heart Assoc.

"low fat" eat healthy grains diet, limited my saturated fat, and I didn't even eat a cholesterol rich egg for over 20 years and still had major blockages in my heart. The big question was: Why did I and more than 25% of Americans each year, either die of a heart attack or find out that they have coronary heart disease? Alzheimer's Disease - Biology Educational Resource.