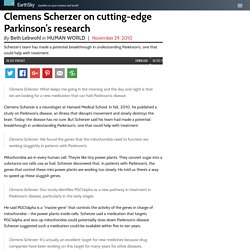 Clemens Scherzer is a neurologist at Harvard Medical School. In fall, 2010, he published a study on Parkinson’s disease, an illness that disrupts movement and slowly destroys the brain. Today, the disease has no cure. But Scherzer said his team had made a potential breakthrough in understanding Parkinson’s, one that could help with treatment. Parkinson's Disease and Pesticides: What's the Connection? Parkinson's Disease - Dr Hadwen Trust. The mouse is the most commonly used research animal for the study of human brain disorders like Parkinson’s disease and a related condition amyotrophic lateral sclerosis (ALS or Motor Neurone Disease). 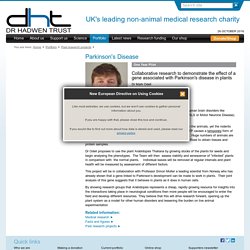 There is no cure for Parkinson’s Disease or ALS. To create Parkinson’s in mice and rats, researchers give chemical toxins to the animals, yet the rodents physiology is different to that of human beings. Gene-silencing study finds new targets for Parkinson’s disease. News Release Sunday, November 24, 2013 NIH study sheds light on treatment of related disorders. 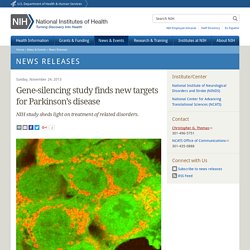 Scientists at the National Institutes of Health have used RNA interference (RNAi) technology to reveal dozens of genes which may represent new therapeutic targets for treating Parkinson’s disease. The findings also may be relevant to several diseases caused by damage to mitochondria, the biological power plants found in cells throughout the body. “We discovered a network of genes that may regulate the disposal of dysfunctional mitochondria, opening the door to new drug targets for Parkinson’s disease and other disorders,” said Richard Youle, Ph.D., an investigator at the National Institute of Neurological Disorders and Stroke (NINDS) and a leader of the study. Mitochondria are tubular structures with rounded ends that use oxygen to convert many chemical fuels into adenosine triphosphate, the main energy source that powers cells. Dr. NIH…Turning Discovery Into Health® Reference Hasson SA et al. 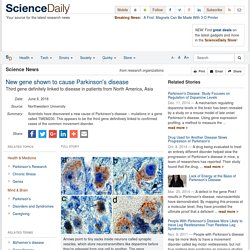 This appears to be the third gene definitively linked to confirmed cases of the common movement disorder. Power Plants of the Cell Become Suspect in Baffling Diseases. Ancient, bacteria-like creatures that inhabit every human cell may hold the key to degenerative conditions of old age like heart failure and Parkinson's disease, a growing number of biologists, geneticists and physicians believe. 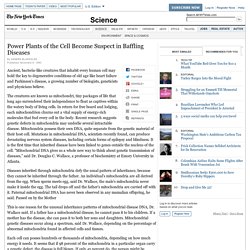 The creatures are known as mitochondri, tiny packages of life that long ago surrendered their independence to float as captives within the watery body of living cells. In return for free board and lodging, each mitochondrion churns out a vital supply of energy-rich molecules that fuel every cell in the body. Recent research suggests genetic defects in mitochondria may underlie several intractable disease. Mitochondria possess their own DNA, quite separate from the genetic material of their host cell. Mutations in mitochondrial DNA, scientists recently found, can produce devastating nervous system diseases, including certain forms of epilepsy and blindness.

This is one reason for the unusual inheritance patterns of mitochondrial disease DNA, Dr. Dr. GetSharedSiteSession?rc=4&redirect= The Parkinson Disease Gene LRRK2: Evolutionary and Structural Insights. What's the Difference Between Parkinson's Disease and ALS? As Parkinson’s disease and Amyotrophic Lateral Sclerosis (ALS) are both progressive neurodegenerative diseases, many people confuse the terms. 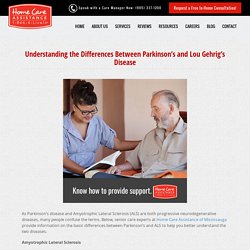 Below, senior care experts at Home Care Assistance of Mississauga provide information on the basic differences between Parkinson’s and ALS to help you better understand the two diseases. Amyotrophic Lateral Sclerosis ALS, sometimes referred to as Lou Gehrig’s disease, involves the degeneration of motor neurons in the spinal cord. These neurons normally transmit signals and impulses from the brain to the rest of the body, but as the condition progresses the neurons harden and eventually die. 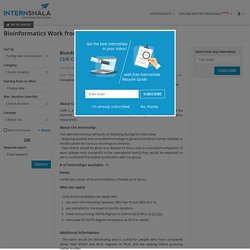 Bioinformatics Work from home Internship at CSIR-CDRi Location(s): Work From Home About CSIR-CDRi ( CDRI is a premier govt of India, not for profit research institute. I have joined the institute as a new faculty and I am looking for long distance bioinformatics researchers. About the Internship: The selected intern(s) will work on following during the internship: - Mapping studied and unstudied homologous genes involved in human diseases in model system for various neurological ailments # of Internships available: 10 Perks: Certificate, Letter of recommendation, Flexible work hours. Who can apply: Only those candidates can apply who: can start the internship between 28th Sep'16 and 28th Oct'16.are available for minimum 6 months duration. have/ are pursuing UG/PG degrees in Science (B.Sc/M.Sc & Similar).have year of UG/PG degree completion as 2016 or earlier. 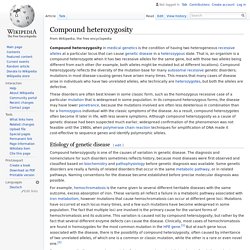 That is, an organism is a compound heterozygote when it has two recessive alleles for the same gene, but with those two alleles being different from each other (for example, both alleles might be mutated but at different locations). Compound heterozygosity reflects the diversity of the mutation base for many autosomal recessive genetic disorders; mutations in most disease-causing genes have arisen many times.

This means that many cases of disease arise in individuals who have two unrelated alleles, who technically are heterozygotes, but both the alleles are defective. These disorders are often best known in some classic form, such as the homozygous recessive case of a particular mutation that is widespread in some population. Etiology of genetic disease[edit] Examples[edit] Phenylketonuria. References[edit]