Stem cells. 'Moonlighting' Molecules Discovered; Researchers Uncover New Kink In Gene Control. Since the completion of the human genome sequence, a question has baffled researchers studying gene control: How is it that humans, being far more complex than the lowly yeast, do not proportionally contain in our genome significantly more gene-control proteins? 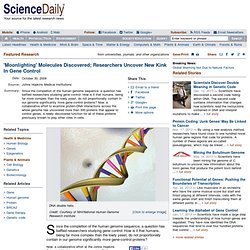 Now, a collaborative effort at the Johns Hopkins School of Medicine to examine protein-DNA interactions across the whole genome has uncovered more than 300 proteins that appear to control genes, a newly discovered function for all of these proteins previously known to play other roles in cells. The results, which appear in the October 30 issue of Cell, provide a partial explanation for human complexity over yeast but also throw a curve ball in what we previously understood about protein functions. The team set out to figure out which proteins encoded by the genome bind to which DNA sequences. One at a time, the team tested each of the 460 DNA sequences against the 4,200 protein-containing chip. 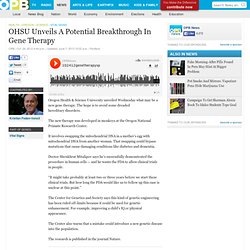 The hope is to avoid some dreaded hereditary disorders. The new therapy was developed in monkeys at the Oregon National Primate Research Center. It involves swapping the mitochondrial DNA in a mother’s egg with mitochondrial DNA from another woman. That swapping could bypass mutations that cause damaging conditions like diabetes and dementia. Doctor Shoukhrat Mitalipov says he’s successfully demonstrated the procedure in human cells — and he wants the FDA to allow clinical trials in people. “It might take probably at least two or three years before we start these clinical trials. The Center for Genetics and Society says this kind of genetic engineering has been ruled off-limits because it could be used for genetic enhancement.

Washington University School of Medicine in St. Louis. Winter 2013 By decoding the complete genetic code, or genome, of more than 1,000 people whose homelands stretch from Africa and Asia to Europe and the Americas, scientists have compiled the largest and most detailed catalog yet of human genetic variation. 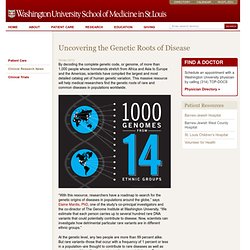 This massive resource will help medical researchers find the genetic roots of rare and common diseases in populations worldwide. “With this resource, researchers have a roadmap to search for the genetic origins of diseases in populations around the globe,” says Elaine Mardis, PhD, one of the study's co-principal investigators and the co-director of The Genome Institute at Washington University. “We estimate that each person carries up to several hundred rare DNA variants that could potentially contribute to disease. Now, scientists can investigate how detrimental particular rare variants are in different ethnic groups.” At the genetic level, any two people are more than 99 percent alike. Q & A: The ABCs of DNA What is DNA? 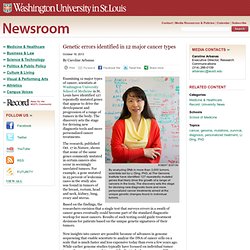 Louis have identified 127 repeatedly mutated genes that appear to drive the development and progression of a range of tumors in the body. The discovery sets the stage for devising new diagnostic tools and more personalized cancer treatments. The research, published Oct. 17 in Nature, shows that some of the same genes commonly mutated in certain cancers also occur in seemingly unrelated tumors.

For example, a gene mutated in 25 percent of leukemia cases in the study also was found in tumors of the breast, rectum, head and neck, kidney, lung, ovary and uterus. Based on the findings, the researchers envision that a single test that surveys errors in a swath of cancer genes eventually could become part of the standard diagnostic workup for most cancers. “This is just the beginning,” said senior author Li Ding, PhD, of The Genome Institute at Washington University. 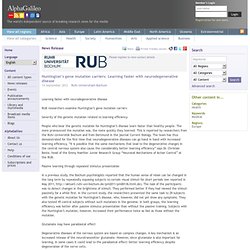