Humans are still evolving—and we can watch it happen. Many people think evolution requires thousands or millions of years, but biologists know it can happen fast. 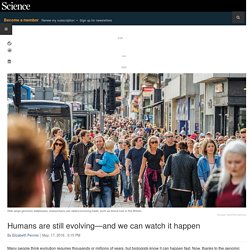 Now, thanks to the genomic revolution, researchers can actually track the population-level genetic shifts that mark evolution in action—and they’re doing this in humans. Huge DNA study tracks how the British have changed since the Romans were in charge  While we may not be sprouting wings, gills or an extra pair of legs any time soon, a new study has shown that human evolution is continuing to grind away. 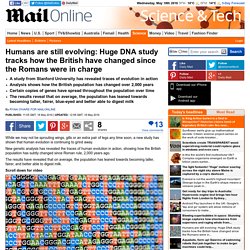 New genetic analysis has revealed the traces of human evolution in action, showing how the British population has subtly changed since Roman rule, 2,000 years ago. The results have revealed that on average, the population has leaned towards becoming taller, fairer, and better able to digest milk. Scroll down for video. The human cells with only HALF a genome: Breakthrough could help treat genetic blindness, diabetes and infertility  Scientists for the first time have generated a type of embryonic stem cell that carries a single copy of the human genome rather than the usual two. 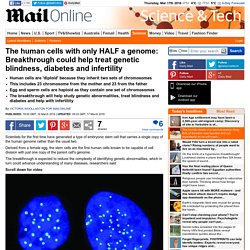 Derived from a female egg, the stem cells are the first human cells known to be capable of cell division with just one copy of the parent cell's genome. The breakthrough is expected to reduce the complexity of identifying genetic abnormalities, which in turn could advance understanding of many diseases, researchers said. Scroll down for video Scientists for the first time have generated a type of embryonic stem cell that carries a single copy of the human genome rather than the usual two, derived from a female egg. A haploid cell with 23 chromosomes is pictured left, and a diploid cell with 46 chromosomes is shown right It could also help advance research in gene editing, genetic screening and regenerative medicine. Human cells are considered diploid because they inherit two sets of chromosomes, 23 from the mother and 23 from the father. Close Ups of the Genome, Species by Species. Human Evolution & Migration: National Geographic's Genographic Project Tells Our Story.

Our human lineage is not actually linear. 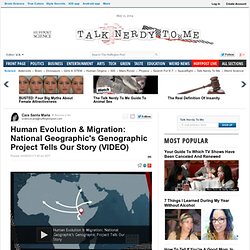 In fact, it's more of a branching tree, telling the story of our origins in Africa and our migrations throughout the world. National Geographic's not-for-profit Genographic Project aims to trace and connect each of our individuals branches to answer questions about how human beings became so genetically diverse. Learn.Genetics™ Born to win! The drive to success is in our genes, say scientists - and DNA dictates if we triumph or fail. 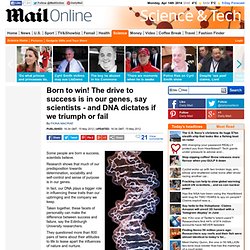 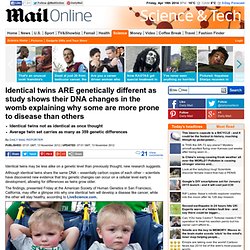 Although identical twins share the same DNA – essentially carbon copies of each other – scientists have discovered new evidence that tiny genetic changes can occur on a cellular level early in development, allowing for differences as twins grow older. The findings, presented Friday at the American Society of Human Genetics in San Francisco, California, may offer a glimpse into why one identical twin will develop a disease like cancer, while the other will stay healthy, according to LiveScience.com. 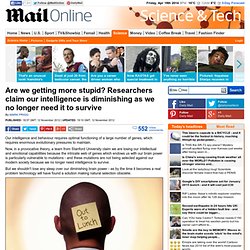 Cannabis risk gene discovered that makes some more prone to mental health problems. Cannabis smokers had double the risk of developing a psychotic disorder if they carried the gene AKT1Research could be used to advise people at greater risk of side-effects By Daily Mail Reporter Published: 17:59 GMT, 15 November 2012 | Updated: 12:00 GMT, 16 November 2012 Cannabis is a Class B drug that has been linked in previous research to psychosis People carrying a specific gene may be more at risk of developing mental health problems from smoking cannabis, according to researchers A study from King’s College London found that cannabis smokers carrying the gene AKT1 had double the chance of developing a psychotic disorder and this increased up to seven-fold if they used the Class B drug daily. 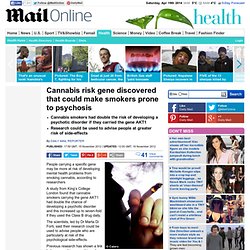 The scientists, led by Dr Marta Di Forti, said their research could be used to advise people who are particularly at risk of the psychological side-effects. Previous research has shown a link between smoking cannabis and psychosis. Gene discovered that decides whether to 'switch on' immune system and could control HIV. Gene, called Arih2, makes decides whether to switch on the immune response to an infectionResearchers are looking at the effect on the immune response of switching gene off for short periodsSay it has potential to help treat chronic conditions By Daily Mail Reporter Published: 14:58 GMT, 27 November 2012 | Updated: 15:50 GMT, 27 November 2012 A newly discovered gene could hold the key to treating and potentially controlling chronic infections such as HIV, hepatitis and tuberculosis. 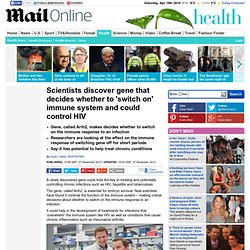 How a gene duplication helped our brains become 'human' A team led by scientists at The Scripps Research Institute has shown that an extra copy of a brain-development gene, which appeared in our ancestors' genomes about 2.4 million years ago, allowed maturing neurons to migrate farther and develop more connections. 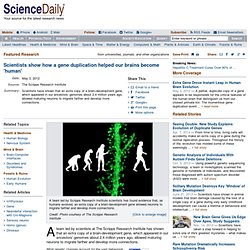 What genetic changes account for the vast behavioral differences between humans and other primates? Researchers so far have catalogued only a few, but now it seems that they can add a big one to the list. A team led by scientists at The Scripps Research Institute has shown that an extra copy of a brain-development gene, which appeared in our ancestors' genomes about 2.4 million years ago, allowed maturing neurons to migrate farther and develop more connections. Surprisingly, the added copy doesn't augment the function of the original gene, SRGAP2, which makes neurons sprout connections to neighboring cells. Scottish lecturer found to be 'grandfather of everyone in Britain'

Osteologists Ove and Evy Persson during the excavation of Grave 2 at Ajvide, Gotland, Sweden, in 1983. The skeleton belongs to a young female, c. 20 years of age, dated to around 2700 BC. Photograph: Photo: Göran Burenhult New findings from a team of Swedish-Danish evolutionary biologists show that the genetic variation of today’s Europeans was strongly affected by immigrant Stone Age farmers. The study involved comparisons of thousands of genetic markers from four Stone Age skeletons to genetic data from living individuals. One of the most debated developments in human history is the transition from hunter-gatherer to agricultural societies. Web TV: Interview with Mattias Jakobsson, Department of Ecology and Genetics, Evolutionary Biology. Resveratrol Interacts with SIRT1 Gene for Health Benefits. New research from Harvard Medical School shows that resveratrol, a compound found in red wine, interacts with a key gene in mitochondria, providing prolonged lifespan and activity of mitochondria.

Why Pygmies Are Short: New Evidence Surprises. Sarah Tishkoff, center, with Pygmy women Pygmy populations, scientists have speculated, may owe their abbreviated stature to natural selection pressures that allowed them to better adapt to dense tropical forests where heat is oppressive and food is scarce. “An outstanding question for many, many years among anthropologists and human geneticists has been what is the genetic basis of the short stature trait in Pygmy populations globally and in Africa in particular, says Sarah Tishkoff, a professor at the University of Pennsylvania, who is a leading expert on African population genetics.

Breakthrough in search for alien life as scientists manufacture DNA-like molecule which can transmit genetic material. By Daily Mail Reporter Published: 05:45 GMT, 29 April 2012 | Updated: 05:45 GMT, 29 April 2012. Missing Lincs. Nearly everybody knows that Frank Lloyd Wright designed Fallingwater, the house in Pennsylvania that sits above and appears to cascade into a waterfall. I.M. Pei’s glass pyramid at the Louvre in Paris is similarly famous. And Frank Gehry is widely known for the curvi­linear shining steel Walt Disney Concert Hall in Los Angeles. Long strands of genetic material called lincRNAs (blue) may guide protein-DNA interactions, among other tasks. The Ghost in our Genes. Why individualism and free-thinking may be in the genes for British people.

DNA study on gorilla shows we are far more similar than scientists thought. Complicated cancer: New research shows how genetic changes make the disease so deadly. The 'macho' gene that makes men aggressive has been found. Is Biological Immortality Possible? New Research Suggests "Yes" Researchers from The University of Nottingham have demonstrated how a species of flatworm overcomes the ageing process to be potentially immortal. The discovery, published in the Proceedings of the National Academy of Sciences, may shed light on the possibilities of alleviating ageing and age-related characteristics in human cells.

"Asexual planarian worms demonstrate the potential to maintain telomere length during regeneration," says Dr Aziz Aboobaker from the University's School of Biology. Scientists find South Sea islanders' blond hair didn't come from Europeans, but evolved separately. 'Insomnia' gene means you sleep two-thirds less than normal and don't live as long. Why some people hate pork: Gene found which changes how we taste pig meat (and not for the better...) Blogging the Human Genome: Did STDs help human beings evolve? Illustration by Andrew Morgan Geneticists in the early 1900s believed that nature—in an effort to avoid wasting precious space within chromosomes—would pack as many genes into each chromosome as possible. Blogging the Human Genome: Elizabeth Taylor’s double eyelashes.