Dinosaur Legs Grown On Genetically Modified Chicken Embryos In World First. Sixty-six million years ago, the age of the dinosaurs came to a dramatic close as a huge asteroid impact accelerated them on a path towards extinction. 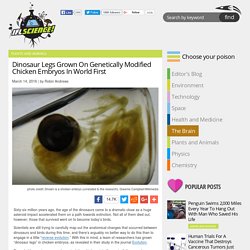 Not all of them died out, however; those that survived went on to become today’s birds. Scientists are still trying to carefully map out the anatomical changes that occurred between dinosaurs and birds during this time, and there’s arguably no better way to do this than to engage in a little “reverse evolution.” With this in mind, a team of researchers has grown “dinosaur legs” in chicken embryos, as revealed in their study in the journal Evolution. Remarkably, previous research manipulating chickens into “becoming” dinosaurs has already taken place. Back in 2015, a study showcased that chickens that had been tweaked during embryonic development could grow a dinosaur-like snout.

This new research aimed to uncover the secrets behind the development of dinosaurian skeletons, once again using chickens. Photo Gallery. I fucking love science. School Accused Of "Genetic Discrimination" After Excluding Student Because Of His DNA. A potentially landmark legal case is currently underway in the U.S., with a middle school in Palo Alto, California, having been accused of “genetic discrimination” against a student. 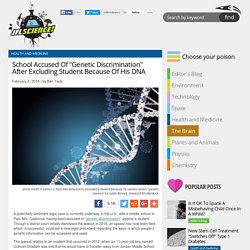 Though a district court initially dismissed the lawsuit in 2013, an appeal has now been filed which, if successful, could set a new legal precedent regarding the ways in which people’s genetic information can be accessed and used. The lawsuit relates to an incident that occurred in 2012, when an 11-year-old boy named Colman Chadam was told that he would have to transfer away from Jordan Middle School because he carried certain “genetic markers” for cystic fibrosis. The school’s decision came after the parents of two other students who suffer from the condition raised concerns about Chadam’s attendance, as it is considered dangerous for people with cystic fibrosis to come into contact with each other.

Genetics and evolution. Human Evolution and genes. Genes of crimes. Genes and aging. Clones. Chromosomes, genes, alleles. Cats and Dogs genes and domestication. British Isles mapped out by genetic ancestry. Stephen Leslie Researchers have found genetic signatures among Britons that betray their historical roots in particular locales of the UK, leading to the finest-scale map of genetic variation yet created. 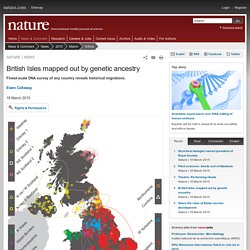 Is synthetic biology sliding down the eugenics slope? “What will we do with this?” 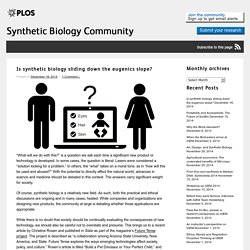 Is a question we ask each time a significant new product or technology is developed. In some cases, the question is literal: Lasers were considered a “solution looking for a problem.” In others, the “what” takes on a moral tone, as in “how will this be used and abused?” With the potential to directly affect the natural world, advances in science and medicine should be debated in this context. The answers carry significant weight for society. Of course, synthetic biology is a relatively new field.

While there is no doubt that society should be continually evaluating the consequences of new technology, we should also be careful not to overstate and presume. Rosen’s article focuses on the work of Cambrian Genetics and CEO Austen Heinz. Here is where concern starts to mount. James Watson Complains That His Racist Remarks Have Affected His Career. If you feel like owning a Nobel Prize medallion, now is your chance. 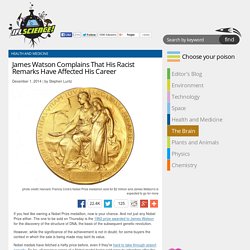 And not just any Nobel Prize either. The one to be sold on Thursday is the 1962 prize awarded to James Watson for the discovery of the structure of DNA, the basis of the subsequent genetic revolution. However, while the significance of the achievement is not in doubt, for some buyers the context in which the sale is being made may taint its value. Nobel medals have fetched a hefty price before, even if they're hard to take through airport security. So far, all previous cases of a Nobel medal being sold were by inheritors after the recipient had died.

Watson has expressed an intention to donate some of the money raised to “institutions that looked after me,” such as the University of Chicago and Clare College, Cambridge. Two-Father Babies Could Soon Be Possible, With No Egg Donor Required. Primordial germ cells (PGCs) are the stem cells that are able to give rise to either sperm or egg cells. 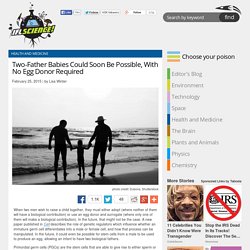 The body typically uses hormonal signals and certain transcription factors in order to determine whether to make the male or female germ cells naturally. While SRY is the gene most widely known for its sex-determining function, the paper describes the importance of another SOX family gene, SOX17. As it turns out, SOX17 is another regulator of human PGC-like cells, and altering the gene can alter the fate of those cells. Rather than just building on our understanding of sex-determining processes, this could potentially have staggering implications for a number of families.

In the coming years, researchers may be able to manipulate this process and make it possible for two men to father a child without the need of an egg donor. Of course, there is a laundry-list of logistical and ethical concerns before this can become a reality.