DNA is the ruling metaphor of our age. Fractal Globules in DNA : FractalFoundation.org. Researchers have discovered how the DNA is packed into our cells in such a way that the roughly 2 meters of DNA in each cell doesn’t tangle, and is easily accessible when it’s needed to make proteins. 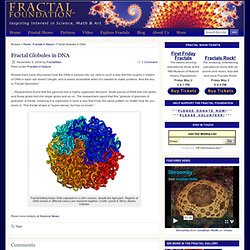 And the key is: Fractal Geometry! ‘…Researchers found that the genome has a highly organized structure. Small pieces of DNA fold into globs, and those globs fold into larger globs and so on. The researchers report that this “globule of globules of globules” is fractal, meaning it is organized in such a way that it has the same pattern no matter how far you zoom in. This fractal shape is “super-dense, but has no knots,” ‘ 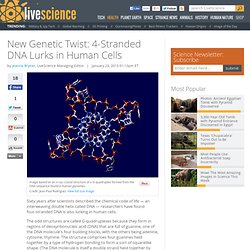 The odd structures are called G-quadruplexes because they form in regions of deoxyribonucleic acid (DNA) that are full of guanine, one of the DNA molecule's four building blocks, with the others being adenine, cytosine, thymine. The structure comprises four guanines held together by a type of hydrogen bonding to form a sort of squarelike shape. (The DNA molecule is itself a double strand held together by these building blocks and wrapped together like a helix.) The new visualization of the G-quadruplex is detailed this week in the journal Nature Chemistry. "I think this paper is important in showing directly the existence of this structure in vivo in the human genome, but it is not completely unexpected," said Hans-Joachim Lipps, of the University of Witten in Germany, who was not involved in the study.

Learn.Genetics™ Scientists discover how epigenetic information could be inherited: Mechanism of epigenetic reprogramming revealed. New research reveals a potential way for how parents' experiences could be passed to their offspring's genes. 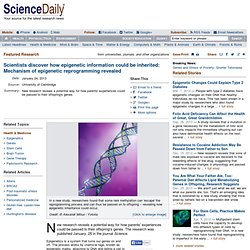 The research was published January, 25 in the journal Science. Epigenetics is a system that turns our genes on and off. The process works by chemical tags, known as epigenetic marks, attaching to DNA and telling a cell to either use or ignore a particular gene. The most common epigenetic mark is a methyl group. When these groups fasten to DNA through a process called methylation they block the attachment of proteins which normally turn the genes on. Scientists have witnessed epigenetic inheritance, the observation that offspring may inherit altered traits due to their parents' past experiences. However, it is thought that between each generation the epigenetic marks are erased in cells called primordial gene cells (PGC), the precursors to sperm and eggs. "However, it is not yet clear what consequences, if any, epigenetic inheritance might have in humans. 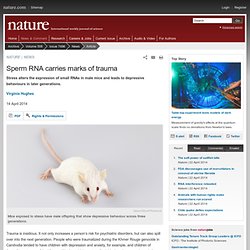 Trauma is insidious. It not only increases a person’s risk for psychiatric disorders, but can also spill over into the next generation. People who were traumatized during the Khmer Rouge genocide in Cambodia tended to have children with depression and anxiety, for example, and children of Australian veterans of the Vietnam War have higher rates of suicide than the general population. Trauma’s impact comes partly from social factors, such as its influence on how parents interact with their children. The study is notable for showing that sperm responds to the environment, says Stephen Krawetz, a geneticist at Wayne State University School of Medicine in Detroit, Michigan, who studies microRNAs in human sperm.

“Dad is having a much larger role … than just delivering his genome.” Far From ‘Junk,’ DNA Dark Matter Proves Crucial to Health. Scientists discover double meaning in genetic code. Scientists have discovered a second code hiding within DNA. 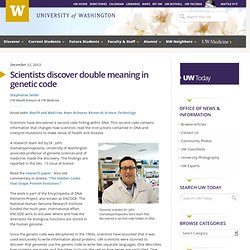 This second code contains information that changes how scientists read the instructions contained in DNA and interpret mutations to make sense of health and disease. High resolutionClick to expand Genome scientist Dr. John Stamatoyannopoulos led a team that discovered a second code hidden in DNA. A research team led by Dr. Read the research paper. The work is part of the Encyclopedia of DNA Elements Project, also known as ENCODE. Since the genetic code was deciphered in the 1960s, scientists have assumed that it was used exclusively to write information about proteins. “For over 40 years we have assumed that DNA changes affecting the genetic code solely impact how proteins are made,” said Stamatoyannopoulos. The genetic code uses a 64-letter alphabet called codons. In addition to Stamatoyannopoulos, the research team included Andrew B. 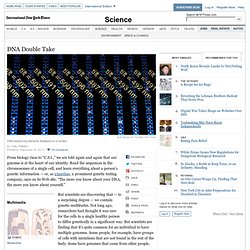 But scientists are discovering that — to a surprising degree — we contain genetic multitudes.