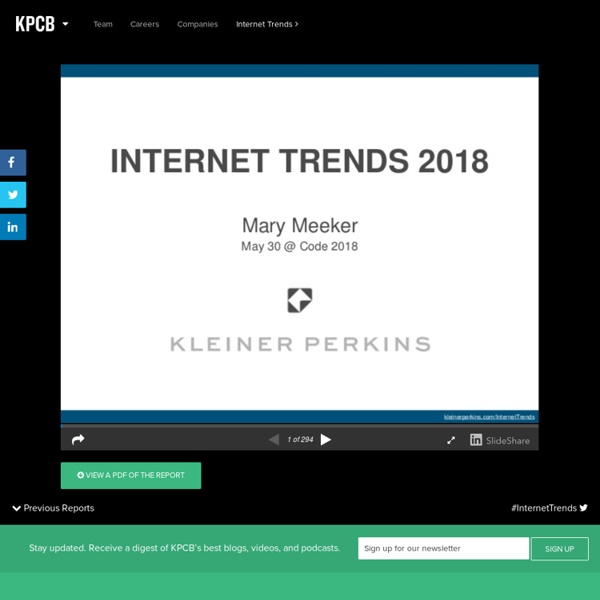 Kleiner Perkins partners with the brightest entrepreneurs to turn disruptive ideas into world-changing businesses. The firm has helped build and accelerate growth at pioneering companies like AppDynamics, Google, Amazon, Flexus Biosciences, Nest, Waze, Twitter, JD.com and Square. Kleiner Perkins offers entrepreneurs years of operating experience, puts them at the center of an influential network, and accelerates their companies from success to significance. For more information, visit and follow us @kpcb.

Joachim Horn, SAM Labs written by Thomas Kohnstamm Making the Internet of Things everybody’s thing There are some 10 billion hardware devices connected to the Internet today. By 2020, this Internet of Things will power over 50 billion connected cars, dog collars, toothbrushes and pretty much anything else you can imagine. Keynote Slides: Social Readiness: Architecting a Connected Enterprise #KMW11 I’m speaking to 1000 attendees here at KMWorld in Washington DC, on building your social business in the right way. I’m here to share Altimeter’s recent research on Social Business Readiness (read full report) which researched how advanced companies are preparing internally, you can read the whole report, and see slides below. Many years back, my career started out running intranets at Cable and Wireless, Exodus, World Savings and Hitachi Data Systems. We know that external social presence is a reflection of what happens inside of the company, and I’m glad to share and learn from these very bright folks.

'Whodunnit' awareness test: How many changes can you spot? The clip initially appears to be a scene from a cliched murder mystery, with a trench coat–wearing detective interviewing the maid, butler and lady of the house over the death of Lord Smithe, who lies sprawled on the drawing room floor. But the sketch is merely the premise for a test designed to show just how bad we are at noticing things that we're not looking for – including on the roads. After the detective names the killer the scene is replayed, this time filmed from a camera that captures all the film crew's out-of-shot manoeuvrings.

It’s time to address the elephant in the room: Influencers don’t really influ... Earlier this week a major shitstorm hit the Internet, when a boutique hotel owner posted a screenshot of an email he received from a travel blogger and “influencer”, asking for a free stay (in the period of Valentine’s day no less!) in return for “coverage” and promotion to her (80k) followers. He posted a very sarcastic and direct reply, rejecting the request. He did not name the blogger, and even hid her details from the screenshot, yet somehow, this blew out of proportions, with her getting “shamed” and “outed” (how, exactly? One has to wonder…) and posting a viral video that only made things worse. I can go into many details about what is wrong in the way she approached the hotel, the mistakes both parties made, and about the things that are actually awesome about the parties’ behavior.

Educator’s Domestic Abuse Educator’s Domestic Abuse Several years ago, I had a long conversation with speaker and author Kevin Honeycutt. He was playing the role of therapist, and I his patient. Microsoft, Google Struggle With New Face Of Collaboration - Telecom - Unified Communications/messaging Microsoft's Office 365 is not the future and neither is Google's Gdocs. But it just might be Facebook or Chatter. It struck me while getting a demo of Salesforce.com's Chatter app: Facebook's three-panel page layout, dominated by a stream-of-consciousness jumping-off point for comment and discussion, is now the de facto standard for virtually every online collaboration site. As I wrote a couple of months ago when describing business-oriented collaboration services like Podio and Yammer, the next frontier in business communication looks a lot more like Facebook than it does SharePoint. So why does Microsoft, via Office 365, seem more focused on augmenting the traditional Office document and file-sharing paradigm with a cloud back end than on collaborating in the way that's become second nature to hundreds of millions of people? Salesforce gets that.

Data Science Jobs Board Data Analytics Associate Carlisle & Company · Concord, MA posted 2 days ago Junior Business Analyst – Sales & Marketing trivago · Düsseldorf posted 3 days ago The End of Theory: The Data Deluge Makes the Scientific Method Obsolete But faced with massive data, this approach to science — hypothesize, model, test — is becoming obsolete. Consider physics: Newtonian models were crude approximations of the truth (wrong at the atomic level, but still useful). A hundred years ago, statistically based quantum mechanics offered a better picture — but quantum mechanics is yet another model, and as such it, too, is flawed, no doubt a caricature of a more complex underlying reality. The reason physics has drifted into theoretical speculation about n-dimensional grand unified models over the past few decades (the "beautiful story" phase of a discipline starved of data) is that we don't know how to run the experiments that would falsify the hypotheses — the energies are too high, the accelerators too expensive, and so on.

More Than a Million Syllabuses at Your Fingertips The open floor plan, Ikea-style furnishing and bubbly atmosphere feel more like a Silicon Valley coworking space than a world class humanities center. At the Stanford Literary Lab, the desks might be littered with hefty tomes, but the laptops show strings of code. The Lit Lab is a stronghold of the Digital Humanities, a field that ties computing to humanistic research. It also hosts a director of the Open Syllabus Project (OSP), a research project organizing data gathered from over a million syllabuses. By identifying the reading list on each document, the team can number and rank the most-taught books since the dawn of storing syllabuses online. David McClure, OSP technical director, is a software engineer with a humanities degree.