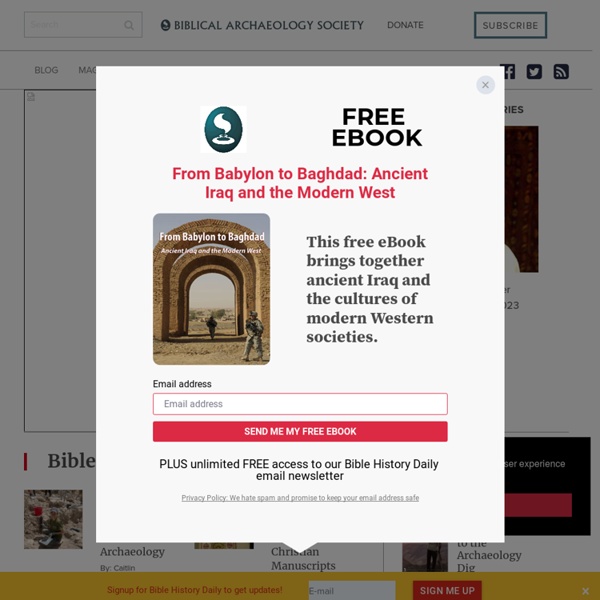 Have you had your Biblical archaeology today? Find out what archaeology can reveal to anyone eager to understand the world of the Bible. Access dozens of free eBooks and daily articles on key Biblical archaeology topics, as well as the latest news and reviews. Written to be understood, Biblical Archaeology Review (BAR) magazine delivers the excitement of archaeology and the latest in Bible scholarship. Explore the current issue along with web-only features and Scholar’s Study, where scholarly debates from the pages of BAR continue online. Whether it’s to research a paper, to prepare a sermon, to deepen your understanding of scripture or history, or simply to marvel at the complexity of the Bible, the BAS Library is the most comprehensive, powerful and easy-to-use online resource for Biblical archaeology.

9 Key Components of the Shift to Higher Consciousness This article originally appeared in WakingTimes.com. Facing considerable political, economic, social and ecological crises, the human race is desperate for a transformation and a new direction. Business as usual ensures that we are doomed to run a course of half-conscious self-destruction, as man-made catastrophes multiply and stress mounts in every aspect of life. We must overthrow our ignorance, as it has become a fearful master, goading us into war, pollution, waste and exploitation. The social problems and entrenched patterns at the source of global issues are too vast and complex to be solved at the personal level, yet, paradoxically, the personal transformation of the individual offers a lonesome opportunity to avert the catastrophes we are engineering for ourselves.

Gene Edward Veith Is Bono, the lead singer and songwriter for the rock group U2, a Christian? He says he is and writes about Christianity in his lyrics. Yet many people question whether Bono is "really" a Christian, due to his notoriously bad language, liberal politics, and rock star antics (though he has been faithfully married for 23 years). But in a new book of interviews, Bono in Conversation by Michka Assayas, Bono, though using some salty language, makes an explicit confession of faith. The interviewer, Mr.

A Pictorial explanation of the Bible Presenting a Historical Chronological Overview of the Bible Click on these Images to study the Bible. Old Testament: In 9 Sub Sections or Modules Genesis part one Genesis part one is the first of seventeen parts we have split the Bible up into so we can explain the Bible in a historical chronological order.......more New Testament: In 8 Sections or Modules Donnely Loeb collection Loeb Classical Library Books Available Online Things just keep growing. This list was initially a subset of my G'Oogle list, which itself had grown out of a post I originally made at textkit. Anyway, this is hoped to be a more-convenient way for us to track all of the freely-available LCL books out there.

Top 200 best iPad apps 2011 If you've got yourself an iPad Air or new iPad mini, you'll want to start downloading the best iPad apps straight away. And if you already have an iPad 4 or older iPad, you might want to update it with some new apps. It's the apps that really set iOS apart from other platforms - there are far more apps available on the App Store for the iPad than any other tablet. So which which ones are worth your cash? And which are the best free apps? Luckily for you we've tested thousands of the best iPad apps so that you don't have to.

About This page includes information about the aims and scope of BMC Bioinformatics, editorial policies, open access and article-processing charges, the peer review process and other information. For details of how to prepare and submit a manuscript through the online submission system, please see the instructions for authors. Scope BMC Bioinformatics is an open access, peer-reviewed journal that considers articles on all aspects of the development, testing and novel application of computational and statistical methods for the modeling and analysis of all kinds of biological data, as well as other areas of computational biology. BMC Bioinformatics is part of the BMC series which publishes subject-specific journals focused on the needs of individual research communities across all areas of biology and medicine. We offer an efficient, fair and friendly peer review service, and are committed to publishing all sound science, provided that there is some advance in knowledge presented by the work.

Bible History Online - Bible Maps Bible Maps - Biblical Maps and Historical Geography for Bible Study (Printing Instructions: Open the map, right click and print) About Bible Maps Maps are essential for any serious Bible study, they help students of the Scriptures understand the geographical locations and historical backgrounds of the places mentioned in the Bible. Creating Books on the iPad Book Creator for iPad: $7.49The simple way to create your own beautiful iBooks, right on the iPad. Read them in iBooks, send them to your friends, or submit them to the iBookstore. Ideal for children’s picture books, photo books, art books, cook books, manuals, textbooks, and the list goes on. eBook Creator: $4.49

First 3D Map of the Brain’s Connections We knew anatomy could be gorgeous, but this is beyond anything else we’ve ever seen, and it’s guaranteed to be something you haven’t seen, being the first 3D image of a brain’s connections. Van Wedeen, a Harvard radiology professor, is awestruck: “We’ve never really seen the brain – it’s been hiding in plain sight.” Conventional scanning has offered us a crude glimpse, but scientists such as Wedeen aim to produce the first ever three-dimensional map of all its neurons. They call this circuit diagram the “connectome”, and it could help us better understand everything from imagination and language to the miswirings that cause mental illness. History of Israel and Palestine in VERY Easy To Understand Maps T he Palestinian Jews were forced to form an organized defense against the Arabs Palestinians.... thus was formed the Hagana , the beginnings of the Israeli Defense Forces [IDF]. There was also a Jewish underground called the Irgun led by Menachem Begin (who later became Prime Minister of Israel). Besides fighting the Arabs, the Irgun was instrumental in driving out the pro-Arab British. Finally in 1947 the British had enough and turned the Palestine matter over to the United Nations.