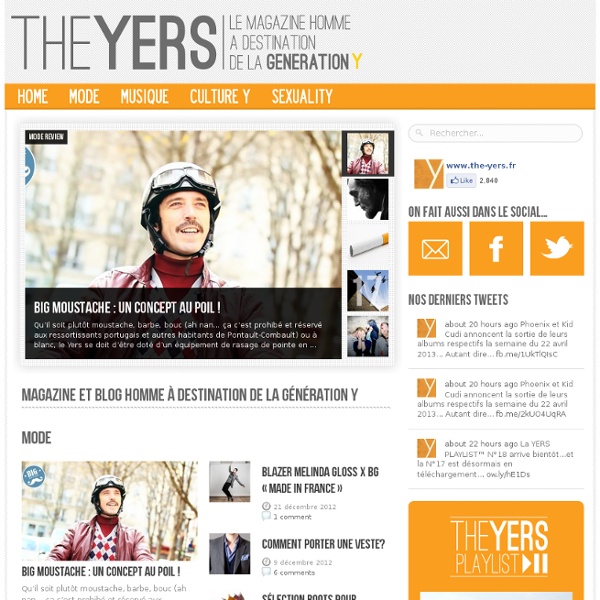 The Sexperience 1000 Welcome to The Sexperience 1000, an interactive journey through the sexual experiences and preferences of one thousand British individuals. What’s the favourite sexual position of iPhone users in the North? Do country music lovers over 55 prefer to do it in the dark? Explore the 20 questions of our survey and discover what the great British public get up to between the sheets… Filter Filter by region, age, etc. and compare to yourself. Food+Drink Fabien Ben N'Sir Organisateur du TEDx Cannes « Nous entrons dans une ère post-digitale, où on ne distingue plus que deux états chez l’individu : en ligne, ou endormi. » Nicolas Saulnier Peintre-hacker

The Flight From Conversation At home, families sit together, texting and reading e-mail. At work executives text during board meetings. We text (and shop and go on Facebook) during classes and when we’re on dates. My students tell me about an important new skill: it involves maintaining eye contact with someone while you text someone else; it’s hard, but it can be done. Over the past 15 years, I’ve studied technologies of mobile connection and talked to hundreds of people of all ages and circumstances about their plugged-in lives. I’ve learned that the little devices most of us carry around are so powerful that they change not only what we do, but also who we are. Smart, dumb, candybar, flip, and brick: a visual history of mobile phones For most of their history, mobile phones have been shrinking. Small meant portable; it even, in the not too distant past, was a sort of status symbol. Remember Motorola’s runaway hit, the ultra-thin Razr? But something funny happened on the smartphone’s way to success. Even as the phones themselves became thinner and lighter, their screens started to grow.

Pretentious Is Not A Sexual Orientation ‘Sapiosexual’ has to be one of the stupidest sexual ‘identities’ to come along in years. New words with the suffix “-sexual” are like catnip for trendy straight people. In the late ’90s and early aughts, we collectively endured the “metrosexual,” a completely unnecessary term for a man who shaves and dares to have a few pastels in his wardrobe. And in the past year, we have watched the rise and fall of the “lumbersexual,” a completely unnecessary term for a man who doesn’t shave and wears flannel. Enter the “sapiosexual,” which Urban Dictionary defines as “one who finds intelligence the most sexually attractive feature.”

The Coronation For years, normality has been stretched nearly to its breaking point, a rope pulled tighter and tighter, waiting for a nip of the black swan’s beak to snap it in two. Now that the rope has snapped, do we tie its ends back together, or shall we undo its dangling braids still further, to see what we might weave from them? Covid-19 is showing us that when humanity is united in common cause, phenomenally rapid change is possible. None of the world’s problems are technically difficult to solve; they originate in human disagreement. In coherency, humanity’s creative powers are boundless.

Gen Z’s relationship with tech: They don’t want to be always reachable Each generation is more connected than the last, but the latest generation, those born after 1998, wants to buck the trend. Members of so-called Generation Z are less likely than their millennial counterparts (66 percent versus 71 percent for women, and 57 percent versus 74 percent for men) to want to be “always reachable,” according to a new survey of 1,500 US residents by market research firm GfK Consumer Life. That puts them more in line with older US generations. About 60 percent of people of all generations in the US are okay with being reachable all the time. Boomers and Gen X'ers Are Wrong to Bash Gen Z I had a front-row seat to how childhood was changing when I was a senior university administrator from 1998 to 2012. I worried about kids raised on a leash. Every year there were more and more. What was once unusual to us about Millennial behavior seemed to have become common with the oldest of the Gen Z generation. Then came the shootings at Marjory Stoneman Douglas High School in Parkland, Florida, and I began to see another side of this new generation that humbles me.

What is camp? The Met Gala theme, explained in words and pictures — Quartzy What do Swan Lake, Tiffany lamps, and “Broccoli” feauring Lil Yachty all have in common? Ostensibly, nothing. But a thread runs through them all: the cultural trope known as “camp.” Camp also happens to be the theme of the Metropolitan Museum of Art’s much-anticipated costume exhibition, the New York City museum announced this week. “Camp: Notes on Fashion” will be unveiled on May 6 at the annual Met Gala, an event underwritten by Gucci and led by Vogue editor-in-chief and Condé Nast artistic director Anna Wintour.