Museum 3 - what will the museum of the future be like? 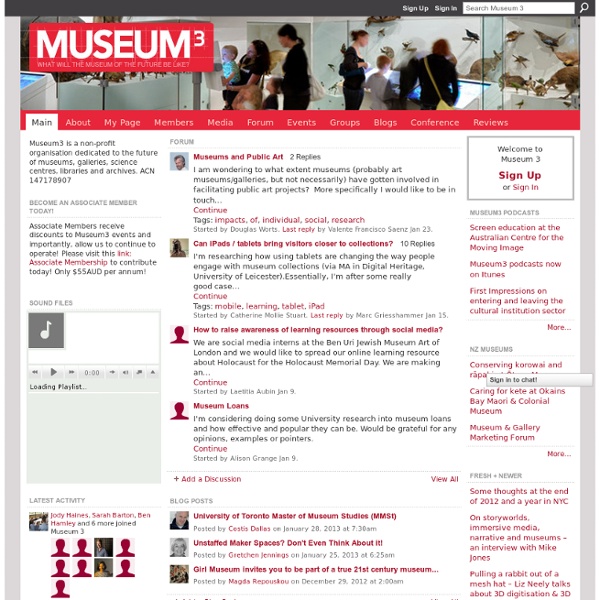 Museums, Cubed Last month, Nate Rudy shared his hope that museums would pop up more often in storefronts to help revitalize small towns. This week, guest blogger Leslie Davol, pushes us to go even further, based on her experience creating distributed cultural experiences via the Street Lab and Uni Projects. The future of museums can include public space, even outdoor public space. Social Engagement Done Right: Getty Museum's New Initiative We invent hashtags, issue images in hopes of getting re-tweeted, ask tiresome questions of our Facebook fans and we think we’re being social. We share clever semi-contextual ads on our Twitter stream and because we’re doing it in real time we think we’re being social. We stick a QR code on an ad or a billboard or a retail display, assuming some poor soul will actually scan it, and we think we’re being social.

What employers seek in public history graduates (Part 3): Skill sets beyond collections management This is the third post in a series to discuss the genesis of the idea for the “What Employers Seek in Public History Graduates” session at the 2013 National Council on Public History meeting in Ottawa. Session panelists will continue to share their thoughts on the topic in entries in the coming weeks. Before the rapid proliferation of museum studies and public history programs began in the 1960s and 1970s, almost all museum professionals held degrees in traditional academic disciplines related to the content areas of their museums. People who worked in historic sites and history museums usually had degrees in history. Typically, museum-specific skills and knowledge in areas such as collections care, exhibit development, and interpretation were learned “on-the-job.” In today’s economic climate, fewer museums and heritage sites can afford to hire entry-level professionals who must be trained on-the-job to do the work of public history.

How to Develop a (Small-Scale) Social Media Plan Yesterday, I enjoyed three hours of graduate students' presentations of social media plans for museums in the Pacific Northwest. I've been working with these UW museology students for the past quarter, and each partnered with a local client institution to develop a social media plan either for a particular exhibition, program, or initiative, or for an entire institution. Here is the process I offered them for developing and writing these plans. It can be used internally by staff, or externally (as in the students' cases) as a consultant with a partner organization. There are three parts: the institution or initiative's content and audience goals, the institution's assets, and the project concept that will match goals to resources in an achievable way.

Where Should Museums Look for the Workforce of the Future? That leaves me wondering, who would museums hire if they looked beyond the traditional pipeline? Especially as there is such widespread dissatisfaction with the traditional pipeline (e.g., museum studies programs, arts administration). Some signals of how this model of training and hiring is creaking at the seams include: I’m not convinced the solution to these challenges lies in recruiting different people to museum studies programs and tweaking the syllabus. Collection Mgmt. Policy Museums are so varied in their governing structures, social contexts, activities, and purposes that there is no single model collections management policy. The form and content of any policy statement rests with the individual museum and should be tailored to the museum's activities, discipline, nature of the collections, and organization structure. However, there are common issues that all institutions should consider in developing a collections management policy. Statement of Purpose (Mission statement)

Evidence that the staycation trend is both real & long-term - Leisure e-Newsletter Evidence that the staycation trend is both real & long-term We recently dug into unpublished data from the U.S. Consumer Expenditure Survey to determine how real the staycation trend is in respect to spending at location-based entertainment venues during trips and whether it is only recession-based or perhaps a much longer term trend. Museums and the Web 2013 thoughts Museums and the Web 2013 in Portland Oregon was an action-packed few days of intense conversations and great food for thought. Portland food trucks. You just can’t go wrong. Danny Birchall and Susan Edwards have both written great summaries of their experiences at the conference and I recommend both.

Museums and open educatione-Literate As we rethink the factory-style model of education in our schools (students learning in a group at a standardized pace) empowered by the powerful technologies now at our disposal, we will naturally also think of ways to better support the educational missions of museums. Some recent discussions The thoughts below were inspired by a number of recent blog posts: Nina Simon’s Khan Academy and Online Free Choice LearningGretchen Jennings’s Museum Educators – What’s Next and a second post on the topicErin Branham’s First Steps to Embracing Digital Literacy for Musem Educators Each of these raises important questions about the role of museums and museum education given the enormous changes taking place in both K-12 and higher education. Some of this discussion was prompted by the fall 2012 issue of Museum Education on the theme of Museum Education in Times of Radical Social Change (sadly locked away behind a pay-wall). 4) Experiment with new tools for collaboration and publishing.

Collaboration & Engagement: Museums & the Web 2013 Takeaways Games, curation, design thinking, more games, crowdsourcding, theater, humor, and 3D printing. These were some of the topics of great salons, discussions, workshops, and sessions, at this year’s Museums & the Web conference in Portland, Oregon. Reaching outPortlandia, on the Portland Building in Portland, OR A common thread through all of these topics is some flavor of engagement (yes, even 3D printing! I’ll explain below.).

Process stories In politics, the idea of a process story – the inside story about how policy is made – doesn’t always sit well. It’s “too inside baseball.” The focus on what is happening behind the scenes, on the machinations that impact policy outcomes is often perceived to be a distraction from the political outcomes themselves. But I’m a sucker for stories that unpack how something happens rather than simply focussing on the end result or product. I like knowing why particular choices were made and by whom; it helps me understand the flows of power and influence that shape the world. This emphasis on process instead of only the final product is an idea that I can see in a few different places in our sector too, and I’m really excited by it.