I was wrong about networks. Digital is default. Doug Belshaw's Thought Shrapnel. “We shape our tools and thereafter our tools shape us.” 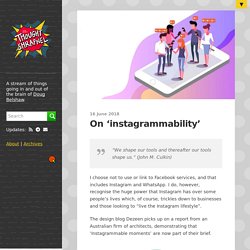 (John M. Culkin) I choose not to use or link to Facebook services, and that includes Instagram and WhatsApp. You’re a Researcher Without a Library: What Do You Do? Many publications are available in a free-to-read archive either entirely, as an unformatted manuscript after peer-review, or as a pre-peer-reviewed version. 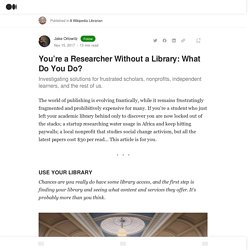 Even the more stringent publishing agreements typically let a research institution keep a copy around for safe-keeping in their university repository — a collection of the digital output of the university community. These papers may be the published version, or a “preprint” version from either before peer review, or after peer review but before layout and formatting. The problem is, many schools and authors don’t self-archive robustly, and there are gaps in publication histories, or in recent publications which may be blocked by an “embargo” for 6–24 months after release. Many disciplines have spun up their own bigger repositories by subject. The big name is PubMed Central, a repository for medicine that holds over 4 million free articles. 10 Authoring Tools For Easy eLearning Design. RIP #Storify…hello #Wakelet – Learn, do, teach...too. In December, 2017, Storify announced that it was closing down as of May 2018. 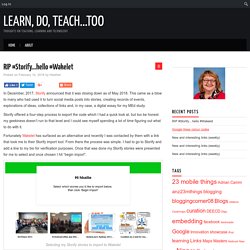 This came as a blow to many who had used it to turn social media posts into stories, creating records of events, explorations of ideas, collections of links and, in my case, a digital essay for my MEd study. Storify offered a four-step process to export the code which I had a quick look at, but too be honest my geekiness doesn’t run to that level and I could see myself spending a lot of time figuring out what to do with it. 2017-12-14: Storify Will Be Gone Soon, So How Do We Preserve The Stories? Popular Storytelling service, Storify, will be shut down on May 16, 2018. 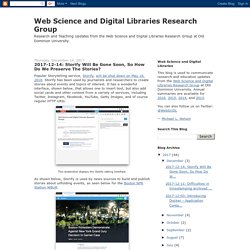 Storify has been used by journalists and researchers to create stories about events and topics of interest. It has a wonderful interface, shown below, that allows one to insert text, but also add social cards and other content from a variety of services, including Twitter, Instagram, Facebook, YouTube, Getty Images, and of course regular HTTP URIs. As shown below, Storify is used by news sources to build and publish stories about unfolding events, as seen below for the Boston NPR Station WBUR.

It is also the visualization platform used for summarizing Archive-It collections in the Dark and Stormy Archives (DSA) Framework, developed by WS-DL members Yasmin AlNoamany, Michele Weigle, and Michael Nelson. In a previous blog post, I covered why this visualization technique works and why many other tools fail to deliver it effectively. The digital native is a myth : Nature News & Comment. Thomas Trutschel/Photothek/Getty Exposure to technology does not make young people digital natives. 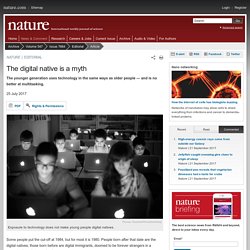 Some people put the cut-off at 1984, but for most it is 1980. People born after that date are the digital natives; those born before are digital immigrants, doomed to be forever strangers in a computer-based strange land. The generational difference between the groups goes beyond their numbers of Facebook friends and Twitter followers: it can also help to explain differences in how they buy insurance. At least, that’s according to a report released this week for the insurance industry. But a paper published last month in Teaching and Teacher Education reaches the opposite conclusion. Education policy is particularly vulnerable to political whims, fads and untested assumptions. It is beyond dispute that people brought up in the most recent decades have been exposed to a lot of digital technology — at least in developed countries. Living in a “GAFA” world.

Think of what Google, Apple, Facebook and Amazon services and products you use daily. 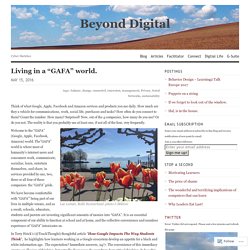 How much are they a vehicle for communications, work, social life, purchases and tasks? The Hashtag is 10 – Chris Messina – Medium. It may surprise you to learn that Twitter didn’t invent the hashtag. 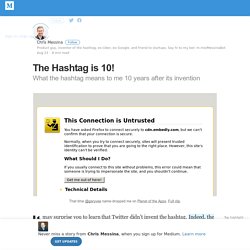 Indeed, the hashtag has become so ubiquitous that it’s hard to imagine that there was a time before the hashtag. But indeed there was, and it was over ten years ago today. On August 23, 2007 at 12:25PM PST, I tweeted a simple idea that would change how we use social media and communicate, possibly forever: Two days later, I published a lengthy proposal clarifying my intention, with suggestions for how Twitter might adopt the idea, even though I never worked for Twitter.

Instead, I was an early user and a fan, and a believer in the power of the internet coupled with free/libre technologies to bring people together. V&R mapping – Digital – Learning – Culture. The mapping process is a Visitors and Residents based group activity which is designed to explore individuals engagement with the Web. 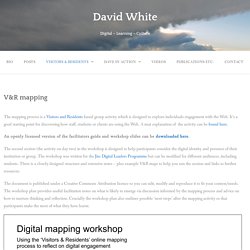 It’s a good starting point for discovering how staff, students or clients are using the Web. A neat explanation of the activity can be found here. An openly licensed version of the facilitators guide and workshop slides can be downloaded here. The second section (the activity on day two) in the workshop is designed to help participants consider the digital identity and presence of their institution or group. The Adaptable Mind. Technology is making the world more unequal. Only technology can fix this. Here’s the bad news: technology – specifically, surveillance technology – makes it easier to police disaffected populations, and that gives badly run, corrupt states enough stability to get themselves into real trouble. 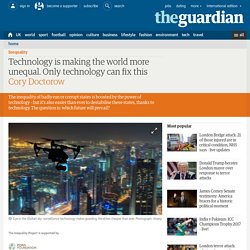 Here’s the good news: technology – specifically, networked technology – makes it easier for opposition movements to form and mobilise, even under conditions of surveillance, and to topple badly run, corrupt states. Inequality creates instability, and not just because of the resentments the increasingly poor majority harbours against the increasingly rich minority. Everyone has a mix of good ideas and terrible ones, but for most of us, the harm from our terrible ideas is capped by our lack of political power and the checks that others – including the state – impose on us. As rich people get richer, however, their wealth translates into political influence, and their ideas – especially their terrible ideas – take on outsized importance. Understanding Digital Badges and Open Badges – Linking Learning.

When cleaning out my closet, I found my school port from Year 2. 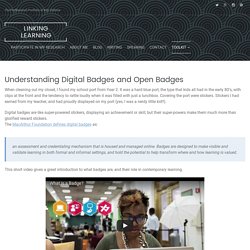 It was a hard blue port, the type that kids all had in the early 80’s, with clips at the front and the tendency to rattle loudly when it was filled with just a lunchbox. Covering the port were stickers. Disruptive Machine Learning – Towards Data Science – Medium. Over the last twenty years, while we’ve been learning how to learn from one another — and doing an amazingly good job of it, we’ve also been learning something more fundamental. We’ve been learning how to learn.

Cookies are Not Accepted - New York Times. Artificial Intelligence, Machine Learning, and Deep Learning. We’re all familiar with the term “Artificial Intelligence.” After all, it’s been a popular focus in movies such as The Terminator, The Matrix, and Ex Machina (a personal favorite of mine). But you may have recently been hearing about other terms like “Machine Learning” and “Deep Learning,” sometimes used interchangeably with artificial intelligence.

How to Convince Someone When Facts Fail. Have you ever noticed that when you present people with facts that are contrary to their deepest held beliefs they always change their minds? Me neither. In fact, people seem to double down on their beliefs in the teeth of overwhelming evidence against them. Google removes autocomplete suggestions about Jews, women - CNET. If you have a burning desire to ask two specific questions in a Google search, you'll have to type them all the way out. On Friday, Google removed autocomplete suggestions from its search engine that suggested the word "evil" at the end of these two phrases: "Are Jews... " and "Are women... " It left in place, however, the suggestion of "bad" when users type in "Are Muslims...

" The autocomplete feature is Google's way of finishing your sentences, guessing what you want to search for. The company has deleted autocomplete suggestions in the past, including when a court ordered it to stop suggesting the word "torrent" after the names of popular recording artists. Google, democracy and the truth about internet search. Column: Do we need librarians now that we have the internet? For better or worse, the digital age forces experts to make the case that a Google search doesn’t replace the librarian, and WebMD doesn’t replace the doctor, writes Robert Graboyes of the Mercatus Center. Photo by Atef Hassan/Reuters Observe librarians, and you’ll learn quite a bit about 21st century physicians. LEARN SOMETHING NEW.

The AI disruption wave. Rudina Seseri Crunch Network Contributor. Web Literacy badges in GitHub. INF532 Cohort Artefacts. How to be an effective knowledge worker and ‘manage yourself’ Learn from three founding fathers of distance education interviewed. A Domain of One’s Own in a Post-Ownership Society – Medium. Do not track. Don't fix knowledge problems with information tools. Knowledge and information are not the same, so why do we try to solve Knowledge problems with Information tools? Often a client comes to us and says something like "We have a Knowledge Management problem. More Than a Million Syllabuses at Your Fingertips. The open floor plan, Ikea-style furnishing and bubbly atmosphere feel more like a Silicon Valley coworking space than a world class humanities center. Educator’s Domestic Abuse. Educator’s Domestic Abuse Several years ago, I had a long conversation with speaker and author Kevin Honeycutt. The Web’s Creator Looks to Reinvent It.

The self-fulfilling prophesy - SCHIRN MAG. Joachim Horn, SAM Labs. Written by Thomas Kohnstamm Making the Internet of Things everybody’s thing. What Is the Deep Web? It's More Important Than You Think. Social media: trap or opportunity? Bring your own network. “Will this be on the test?” — The Startup. What’s Next in Computing? #40years of educational technology: Networks. Personal Learning Networks. - Digital Curation. 15 Mind-Blowing Statistics Reveal What Happens on the Internet in a Minute. Medium is not a publishing tool — The Story. Lessons from Davos 2016: Why future-proofing your organization is the most important thing you can… Welcome to the Human-to-Human Purpose and Experience Driven Era (Adventure) The Internet Archive turns 20: a behind the scenes look at archiving the web. Work with cool people on stuff that you love — Solidarity for Slackers.

A Guide to the Social Age 2016. The rise of “homeless” media — Thoughts on Media. What is innovation anyway, and why should you care about it? IP-rimer: A Basic Explanation of Intellectual Property. Why I Won’t Use TurnItIn to Check My PhD Thesis. Tactical Serendipity — The Learning Revolution. Shorter, better, faster, free — Advice for authoring a PhD or academic book. Crafting collaborative places. The digital revolution in higher education has already happened. No one noticed. 6 of the Best Paying Tech Careers for 2016. What implication does the emoji have for the future of linguistics? — The Interrobang. Grant to Develop the Next Generation Wayback Machine. Dear teacher: copyright concerns you — copyright untangled.

Why is Good Instructional Design More Important than Ever in the Modern World? Social Capital and PLNs: Discovering, Building, and Cultivating Networks of Learners. How is “Connected” Connected? The weakness of the network to nurture curiosity. The 37 Best Websites To Learn Something New — Personal Growth. Learning professionally with Google+ Communities.