The Kind of Christian I Refuse to Be. I am a Christian. 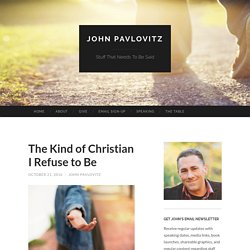 How Evangelicals are Losing an Entire Generation. This morning I want to throw in the towel. 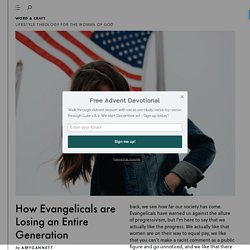 The morning hustle began as it always does on Friday mornings. I walked the dog, drank the coffee, cleaned the kitchen, and headed for the shower. Girl got herpes after church didn't report alleged abuse, suit says. A woman who says her daughter told leaders of a McMinnville church that her father was sexually abusing her has filed a $5.2 million lawsuit, faulting church leaders for keeping quiet. 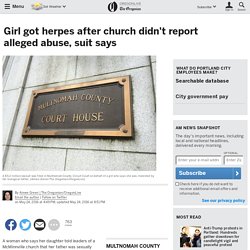 The girl, starting at age 6 or 7, confided in various church leaders over the course of nearly two years, but they didn't report the alleged abuse to police or child protection workers as required under Oregon's mandatory reporting law, according to the suit. The leaders -- including teachers and clergy -- also didn't say anything to the girl's mother for nearly two years -- and the girl ultimately ended up contracting herpes from her biological father, the lawsuit claims. Is Time of Death Preordained? – The Uncontrolling Love of God. By Rev. 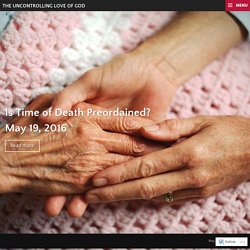 John W. Dally Ordained Elder and Hospice Chaplain, Church of the Nazarene “What is God waiting for?” An open letter to pastors (A non-mom speaks about Mother’s Day) I’ve asked Amy Young to share her “Open Letter to Pastors,” with us. 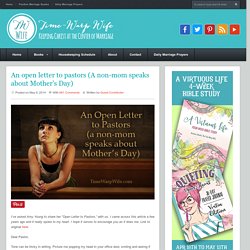 I came across this article a few years ago and it really spoke to my heart. I hope it serves to encourage you as it does me. Link to original here. Dear Pastor, Tone can be tricky in writing. Everything Doesn't Happen For A Reason — Tim Lawrence. I emerge from this conversation dumbfounded.

I've seen this a million times before, but it still gets me every time. I’m listening to a man tell a story. A woman he knows was in a devastating car accident; her life shattered in an instant. She now lives in a state of near-permanent pain; a paraplegic; many of her hopes stolen. The unmaking of Nichole Nordeman. Q&A One of Christian music’s best-known voices emerges from a 10-year hiatus to sing about hope amid pain | Warren Cole Smith Nicole NordemanFacebook Fifteen years ago, Nichole Nordeman, then still in her 20s, was one of the biggest names in contemporary Christian music. 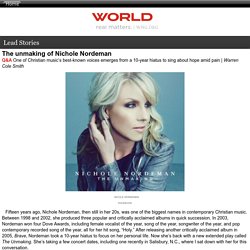 Between 1998 and 2002, she produced three popular and critically acclaimed albums in quick succession. In 2003, Nordeman won four Dove Awards, including female vocalist of the year, song of the year, songwriter of the year, and pop contemporary recorded song of the year, all for her hit song, “Holy.” After releasing another critically acclaimed album in 2005, Brave, Nordeman took a 10-year hiatus to focus on her personal life. The Philomena Project. What do teenagers need from youth ministry? 1 of 2 A few years ago I volunteered at an event put on by a national youth ministry. 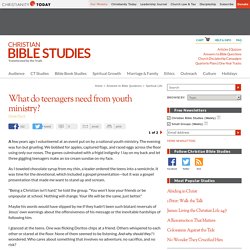 The evening was fun but grueling. Youth Groups Driving Christian Teens to Abandon Faith. Join us on our podcast each weekday for an interesting story, well told, from Charisma News. 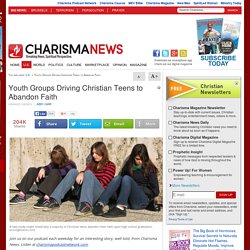 Listen at charismapodcastnetwork.com. A new study might reveal why a majority of Christian teens abandon their faith upon high school graduation. Some time ago, Christian pollster George Barna documented that 61 percent of today's 20-somethings who had been churched at one point during their teen years are now spiritually disengaged. They do not attend church, read their Bible or pray. According to a new five-week, three-question national survey sponsored by the National Center for Family-Integrated Churches (NCFIC), the youth group itself is the problem. For the sake of the gospel, drop the persecution complex. Did you hear about the pastor who was arrested for not marrying a same-sex couple? 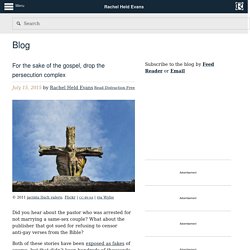 What about the publisher that got sued for refusing to censor anti-gay verses from the Bible? Both of these stories have been exposed as fakes of course, but that didn’t keep hundreds of thousands of conservative Christians from sharing them online this week. When I pointed out to a friend that the story he had just shared on social media wasn’t true, he replied, “well it might as well be.

The Dangers of Purity Culture. "So did you—uh—develop early or what? " my male friend asked me as he grabbed his books from his locker. I was crouching down to pull my Spanish book out of my own locker, which was, unfortunately, on the bottom row. 5 Trends Christians Millennials MUST STOP Doing. Disclaimer: While most of my material is soft in delivery, there is a time and a place for a strict and assertive approach.

The 15 Diseases of Leadership, According to Pope Francis. Pope Francis has made no secret of his intention to radically reform the administrative structures of the Catholic church, which he regards as insular, imperious, and bureaucratic. He understands that in a hyper-kinetic world, inward-looking and self-obsessed leaders are a liability. A Relevant Reblog. I had a conversation with someone the other day about why I journal and blog. To put it as frankly as I can… I suffer from ever-so-frequent bouts of forgetfulness. Through the ups and downs life’s journey brings… I forget the ways God’s been good in the wonderful times… and I forget the ways God’s been ever present through the hardest of times.

Want millennials back in the pews? Stop trying to make church ‘cool.’ Bass reverberates through the auditorium floor as a heavily bearded worship leader pauses to invite the congregation, bathed in the light of two giant screens, to tweet using #JesusLives. An Important Question for Christians in Their 20s & 30s. Bringing The Table to life. 20 Reasons Why the Christian Right & the Christian Left Won’t Adopt Me. The Supreme Court Just Gave American Evangelicals a Gift. Churches Need to Stop Avoiding Talking About Sexual Abuse. The Christian Universalist Association. The Man Who May One-Up Darwin. On a sunny afternoon, at a bustling cafe less than a mile from Stanford University’s Palo Alto campus and more than 5,000 miles from his home, an assistant professor from MIT is telling me about science.

Very advanced science. 3 Youth Group Lessons I've Had to Unlearn. What Does Jesus Have to Do With Massive Buildings and Leadership Conferences? Americans still believe in Jesus. Is the Sinner’s Prayer Biblical? Sometimes when I hear people speak about sharing the Gospel and inviting others to pray the “sinner’s prayer,” it sounds completely underwhelming. 20 Signs You Grew Up a Church Kid. *This post contains affiliate links. Clicking on the link and making an Amazon purchase helps support my family. World’s ‘hottest’ porn star gives life to God. Outlawed Grief, a Curse Disguised. Is Atheism Irrational? - NYTimes.com. Can A Jew Be A Christian and Still Remain A Jew? How I Got "Dead Poets Society" Wrong. 16 Ways Progressive Christians Interpret the Bible. Do we know What we worship? - Christianity Original. The Heart of the Songs. When Risking it All for God Means Staying Where You Are. Do justice. Love mercy. Walk humbly.

Rethinking Hell: The First Argument. My Problem With the Bible - Brian Zahnd. Is Public School an Option? What I Wish I Hadn’t Learned in Sunday School. Joel Osteen and his wife are heretics, and that's why America loves them - The Matt Walsh Blog. 5 Biblical Concepts Fundamentalists Just Don’t Understand. Thegospelcoalition. 6 Heretics WHO SHOULD BE BANNED FROM EVANGELICALISM. What No One Tells You About Going on Mission Trips. Your Most Ordinary Life Now. Simple Salvation Church of God - "TODAY YOU ARE ONE DAY CLOSER TO GOD'S KINGDOM!" - Spokane, WA. Why millennials are leaving the church. In which this is for the ones who stay.

In which this is for the ones leaving evangelicalism.