Welcome to Dennis Priebe Seminars. Background Information. Dennis Priebe is a Seventh-day Adventist minister, with 40 years experience as a pastor, a teacher, and seminar speaker. 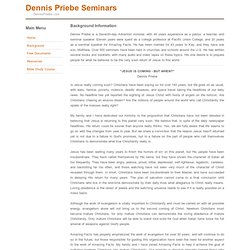 Eleven years were spent as a college professor at Pacific Union College, and 20 years as a seminar speaker for Amazing Facts. He has been married for 43 years to Kay, and they have one son, Matthew. Over 500 seminars have been held in churches and schools around the U.S. What is a Seventh-Day Adventist. Dennis Priebe A number of years ago the Seventh-day Adventist Church voted to have twenty-seven brief statements describing the beliefs held in common by members of the denomination. 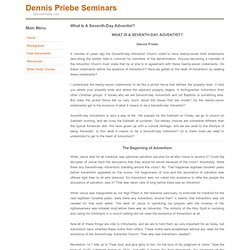 Anyone becoming a member of the Adventist Church must state that he or she is in agreement with these twenty-seven statements. Do these statements define the essence of Adventism? Evangelicals and Adventists Together. Dennis Priebe Much has been written and said about the Evangelical - Catholic alliance that has shocked many observers. 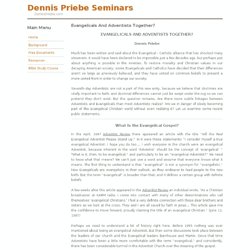 It would have been declared to be impossible just a few decades ago, but perhaps just about anything is possible in the nineties. Fifty Years Under Review. Dennis Priebe In October, 2007 a historic conference convened at Andrews University. 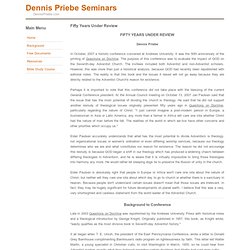 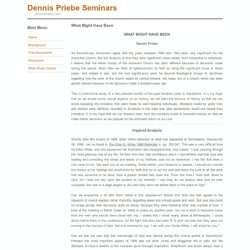 But the analysis of how they were significant varies widely from interpreter to interpreter. I believe that the whole history of the Adventist Church has been different because of decisions made during this period. The Legacy of Ford. Dennis Priebe The most confused and divisive subject in the Seventh-day Adventist church today is not the ordination of women or Christian rock, but the subject of how a person is saved by the sacrifice of Christ. 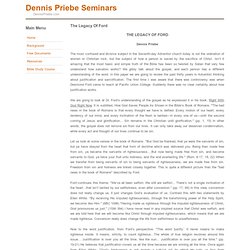 Isn’t it amazing that the most basic and simple truth of the Bible has been so twisted by Satan that very few understand how salvation works? We glibly talk about the gospel, and each person has a different understanding of the word. In this paper we are going to review the past thirty years in Adventist thinking about justification and sanctification. The first time I was aware that there was controversy was when Desmond Ford came to teach at Pacific Union College. Protestant or Catholic. Dennis Priebe During the last few years a challenge has been offered to Seventh-day Adventists. 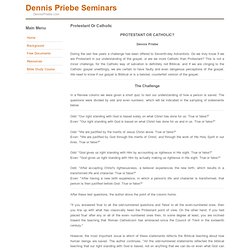 Do we truly know if we are Protestant in our understanding of the gospel, or are we more Catholic than Protestant? This is not a minor challenge, for the Catholic way of salvation is definitely not Biblical, and if we are clinging to the Catholic gospel unwittingly, we are certain to have faulty and even dangerous perceptions of the gospel.

Current Issues in Justification. Dennis Priebe Justification by faith is the most basic principle of the gospel. 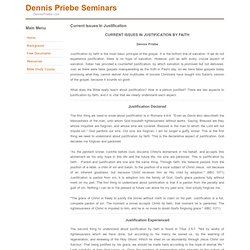 It is the bottom line of salvation. If we do not experience justification, there is no hope of salvation. However, just as with every crucial aspect of salvation, Satan has provided a counterfeit justification, by which salvation is promised but not delivered. New Light for Adventists. Dennis Priebe The one God sent as a special messenger to the end-time remnant said repeatedly that God had not given all truth to those living in her generation. 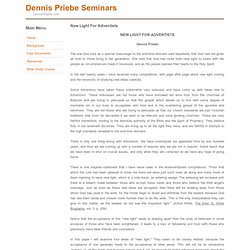 She said that God had more truth--new light--to share with His people as circumstances made it necessary and as His people opened their hearts to the Holy Spirit. In the last twenty years I have received many compilations, with page after page about new light coming and the necessity of studying new ideas carefully. Some Adventists have taken these statements very seriously and have come up with ideas new to Adventism. These individuals are not those who have borrowed old error from from the churches of Babylon and are trying to persuade us that the gospel which allows us to live with some degree of inevitable sin in our lives is acceptable with God and is the everlasting gospel of the apostles and reformers. Questions on Doctrine. Dennis Priebe Recently, Andrews University Press printed a new edition of the groundbreaking 1957 book, Seventh-day Adventists Answer Questions on Doctrine . 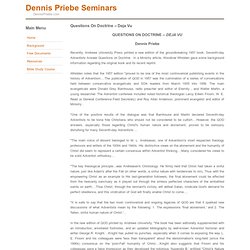 In a Ministry article, Woodrow Whidden gave some background information regarding the original book and its recent reprint. Whidden notes that the 1957 edition "proved to be one of the most controversial publishing events in the history of Adventism....The publication of QOD in 1957 was the culmination of a series of conversations held between conservative evangelicals and SDA leaders from March 1955 into 1956. The Human Nature of Christ. Dennis Priebe There are some subjects that people just don't like to talk about. Even when they are appropriate for discussion, they are carefully avoided. Often we are told that these subjects are not important to understand, that they really don't make any difference. During the last twenty-five years the human nature of Christ has been one of these subjects. How many speakers are willing to speak publicly about it? Prophet or Priest.

Dennis Priebe True North One can conduct a fascinating experiment by asking a group of people to close their eyes, raise their right hands, and then point in the direction of north. When Error Surrounds Us. Dennis Priebe Occasionally one comes across an article revealing unusual prophetic insight. Recently I came across such a column in the Adventist Review of December 4, 1980. The piece was authored by Victor Christensen of Australia. He made several predictions of what would soon be taught in the Seventh-day Adventist Church which have found remarkable fulfillment in recent years. Following are some of these predictions. Confusing the Gospel. Dennis Priebe Why another study on righteousness by faith? Aren't there many other subjects we could profitably study? Why do we need yet another study on the gospel? First, because the gospel is the heart of everything we are as Christians. How Should We Treat the Animals.

Matthew Priebe One of the most deeply held beliefs of mankind is that human beings are the absolute masters of the earth. In our society many of our practices impact on the lives of animals in a variety of ways. What is our duty as Adventist Christians to the animals around us? In Every Way But One. To Sin or Not to Sin. Victory Over Sin-How. Experience-Driven Christianity. How Inspired Was Ellen White. Will The Great Controversy End Soon. Current Issues in Sanctification. God On Trial. Are All Men Condemned At Birth.

What is The Final Atonement. Is It Essential or Nonessential. Is Jesus Really Coming Soon.