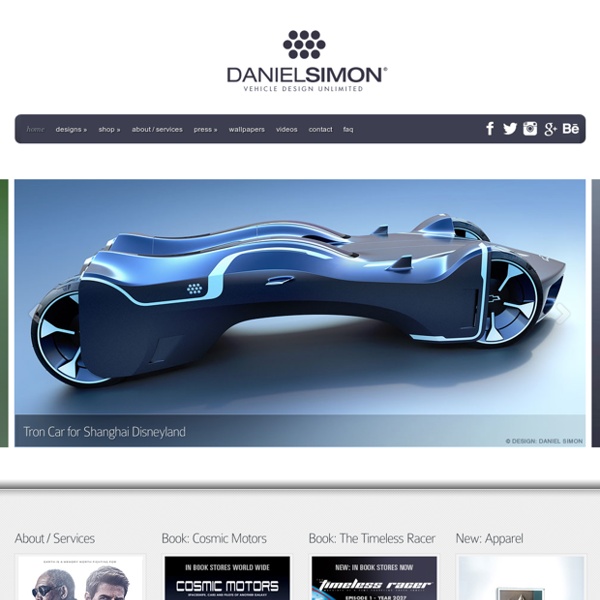 Simon with the 2012 Lotus LMP2 at the Sebring debut. Daniel Simon is a German-born concept designer, author, and producer, with professional roots as a senior designer at Bugatti and Volkswagen. Clients include Warner Bros., Universal, Disney, Lotus, and Hamilton. After working in Spain, England, Brazil, and Japan, Simon settled in Los Angeles, where he focuses his acclaimed style on creating iconic fantasy vehicles for Hollywood blockbuster films such as Tron: Legacy, Captain America: The First Avenger, Prometheus, and Oblivion. He also offers automotive-design services, lectures, and works on his own vehicle-centered fantasy worlds, available as books: Cosmic Motors™ and The Timeless Racer®. To read more about Daniel Simon, click below.

Mechanimal Sketches - DRAWTHROUGH: the personal and professional work of Scott Robertso Welcome DVDs Bio Contact BIOSHOCK INFINITE: Songbird Approaches in This Cool Art Homage You might know Alex Garner from his covers for DC Comics (Wonder Woman, Green Lantern, etc) or by some of his other work that has made the rounds, but his latest spotlights the two main protagonists of the much anticipated Bioshock Infinite. Alex is a huge JC Leyendecker fan, and so made this as a sort of homage to some of JC's famous work. The piece itself features Booker and Elizabeth preparing for the inevitable onslaught of the Songbird, with the city of Columbia in the background. The level of detail is amazing, including the golden hued city and even the fading frame that surrounds the picture. I'm a sucker for anything set in this time period, so aesthetically alone this is a home run, but even without that style it's well done.

Tribal Frog by Paul Braddock Meet the Artist: Paul Braddock With over 12 years experience in the feature film VFX and animation Industry, Paul has always had a passion for creating. Difficult to categorize, Paul's creative interests span multiple genres and styles, from creatures to machines, from toys to jewelry. With the rise of 3D printing, Paul can now explore and share his work on a whole new level. Paul lives in Sydney with his wife, Skye, and Chihuahua, Willis.

The Long, Sad and Drawn out Death of the Games "Journalist". - GamesNosh Jon Blunn Jon does like things other than games, including a shameful penchant for the Sisters of Mercy, Siouxsie and the Banshees and stuff of that ilk.He's not bad at photography but terrible at writing in third person. Latest posts by Jon Blunn (see all) Dear Games Media, I was originally going to write an article on the history of the games media from a British perspective, with particular focus on the many beloved titles published in Britain, as part of a series celebrating British Gaming Culture. Unfortunately it just wasn’t working out, simply because for all it’s past glories, the corporate games media isn’t cause for celebration right now.

Awesome HARRY POTTER Book Sculpture and More! Here's an awesome collection of classic story themed book sculptures for Harry Potter, Knight and Dragon, Tom Sawyer, The Kingdom Within, Star Wars Millennium Falcon, James Bond, Treasure Island and many more. The sculptures were created by Deviant Art artist wetcanvas, and they all turned out really cool! Blog — Paul Braddock I wanted a new project to put the Ultimaker2 through it's paces, and try a few techniques to part the model up for molding and casting resin pieces. There's a number of other reasons why cutting up models into smaller parts is a good idea, such as, prints often fail for one reason or another, so if you're only printing parts at a time, it's not such a huge setback if one fails. Another reason is that the size of your model is not limited to your build envelope. One particular challenge in using an FDM type printer for a project like this, is how to handle overhangs, and oddly shaped parts that do not have flat bottoms. While supports allow you to print odd shapes, the surfaces where they attach are typically less than desirable, so I'll be using a few tricks and techniques to optimize, and minimize the negative effects of these requirements. I'll document the process as I go.

Why Kids Sext - Hanna Rosin An inquiry into one recent scandal reveals how kids think about sexting—and what parents and police should do about it. All photos by Greg Kahn It was late on a school night, so Jennifer’s kids were already asleep when she got a phone call from a friend of her 15-year-old daughter, Jasmine. “Jasmine is on a Web page and she’s naked.” Jennifer woke Jasmine, and throughout the night, the two of them kept getting texts from Jasmine’s friends with screenshots of the Instagram account. Abandoned Suitcases Reveal Private Lives of Insane Asylum Patients If you were committed to a psychiatric institution, unsure if you’d ever return to the life you knew before, what would you take with you? That sobering question hovers like an apparition over each of the Willard Asylum suitcases. From the 1910s through the 1960s, many patients at the Willard Asylum for the Chronic Insane left suitcases behind when they passed away, with nobody to claim them. Upon the center’s closure in 1995, employees found hundreds of these time capsules stored in a locked attic. Working with the New York State Museum, former Willard staffers were able to preserve the hidden cache of luggage as part of the museum’s permanent collection. “There were many patients in these asylums who were probably not unlike friends you and I have now.”

Daily Mobile UI Design Inspiration #337 Are you a UI/UX designer? You are looking for some serious inspiration to inspire you for next project? You are in the correct place. Here we are showcasing the best mobile UI design for your inspiration on a daily basis.