The Death of Jesus as Sacrifice: An Orthodox reading of Isaiah 53 and Romans 3:25 – Orthodoxy and Heterodoxy. The propitiatory or expiatory* nature of Christ’s death on the Cross is perhaps poorly understood in much of contemporary Orthodox theological discussion, and as a result, the notion of the sacrificial atonement of Christ is often minimized or excluded altogether. 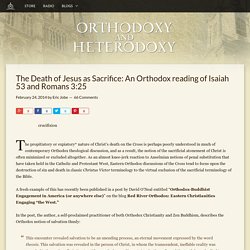 As an almost knee-jerk reaction to Anselmian notions of penal substitution that have taken hold in the Catholic and Protestant West, Eastern Orthodox discussions of the Cross tend to focus upon the destruction of sin and death in classic Christus Victor terminology to the virtual exclusion of the sacrificial terminology of the Bible. A fresh example of this has recently been published in a post by David O’Neal entitled “Orthodox-Buddhist Engagement in America (or anywhere else)” on the blog Red River Orthodox: Eastern Christianities Engaging “the West.”

In the post, the author, a self-proclaimed practitioner of both Orthodox Christianity and Zen Buddhism, describes the Orthodox notion of salvation thusly: Saint Athanasius and the ‘Penal Substitutionary’ Atonement Doctrine. Orthodox Problems with Penal Substitution. An Interfaith Perspective on Christianity’s Emergence and Parting From Judaism. Knit Your Way to a More Prayerful Life. Praise the Lord.

Spindrift. It’s been a while, but I guess the best way to get back into blogging, as with most things, is to just do it and not worry too much about how often. 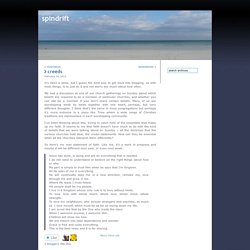 We had a discussion at one of our church gatherings on Sunday about which beliefs are required to be a member of particular churches, and whether you can still be a member if you don’t share certain beliefs. Many of us are worshipping week by week together with one heart, perhaps, but very different thoughts. Contemplative Prayer. Daily Prayer Basics - How To Pray. Daily prayer is essential to a healthy Orthodox Christian life. 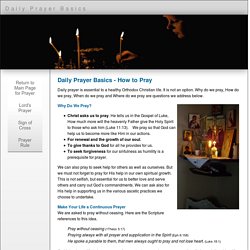 It is not an option. Why do we pray, How do we pray, When do we pray and Where do we pray are questions we address below. Why Do We Pray? Christ asks us to pray. The Magazine: Learning to Pray with the Church. By Sam Ochstein Here’s a confession: I’ve always struggled with prayer. 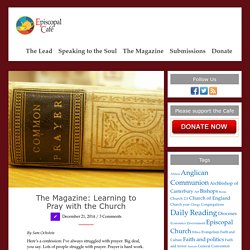 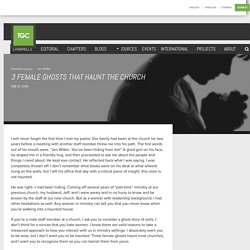 Our family had been at the church for two years before a meeting with another staff member threw me into his path. The first words out of his mouth were, “Jen Wilkin. You’ve been hiding from me!” A giant grin on his face, he draped me in a friendly hug, and then proceeded to ask me about the people and things I cared about. He kept eye contact. The Privilege of Being Small and Beloved - SheLoves Magazine. I spent my childhood hoping to make it big. 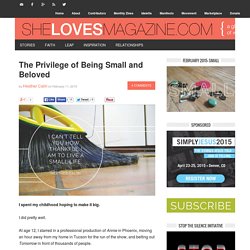 I did pretty well. At age 12, I starred in a professional production of Annie in Phoenix, moving an hour away from my home in Tucson for the run of the show, and belting out Tomorrow in front of thousands of people. A year later, I came across the play’s program in a stack of papers. I flipped through to find my bio, full of accomplishments: commercials for McDonalds and FedEx, an appearance on a TV show, and my plan to travel to the USSR for a month with my ballet company. Girl on Fire: Pain & the Brain: The Not-Magical-Thinking Approach. In case you are wondering and because I use the phrase a lot, "magical thinking" is the whole "if I think something, it will come true/I will get it. 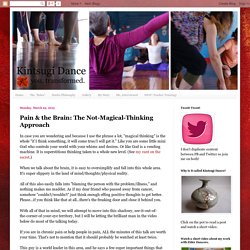 " Like you are some little mini God who controls your world with your whims and desires. Or like God is a vending machine. It is superstitious thinking taken to a whole new level. (See my rant on the secret.) When we talk about the brain, it is easy to oversimplify and fall into this whole area. All of this also easily falls into "blaming the person with the problem/illness," and nothing makes me madder. 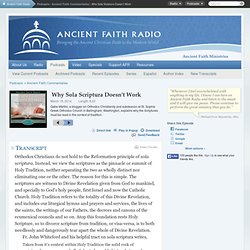 Instead, we view the scriptures as the pinnacle or summit of Holy Tradition, neither separating the two as wholly distinct nor eliminating one or the other. The reason for this is simple. The scriptures are witness to Divine Revelation given from God to mankind, and specially to God’s holy people, first Israel and now the Catholic Church. Akathist of Thanksgiving. A moving hymn thanking God for the created cosmos - often taken as an akathistos of the cosmos and created environment. 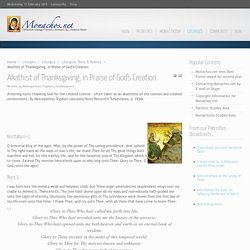 By Metropolitan Tryphon (secularly Boris Petrovich Turkestanov, d. 1934). Kontakion 1 O Immortal King of the ages, Who, by the power of Thy saving providence, dost uphold in Thy right hand all the ways of man’s life; we thank Thee for all Thy good things both manifest and hid; for this earthly life, and for the heavenly joys of Thy Kingdom which is to come. Extend Thy mercies henceforth upon us who sing unto Thee: Glory to Thee, O God, unto the ages! A hopefully friendly Christian response to the atheist ten non-commandments. Christian Spirituality. Christian Theology of Place.

Episcopal Cafe. Orthodox Church and Homosexuality. Ask a Gay Christian...(Response) In Leviticus 18-20, the death penalty is prescribed for a man who "lies with a man as with a woman. 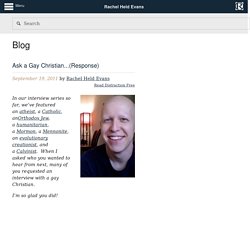 " Discipleship: christian yogis, asana disciples. Dallas Willard notes that the church no longer makes disciples, but settles for making converts. The cost of nondiscipleship for the individual is, in short, “that abundance of life Jesus said he came to bring.” For the church as a whole, the cost of nondiscipleship is just as high. Church leaders discuss the problem of people leaving the church, yet I wonder if perhaps it’s more accurate to say that, by no longer offering programs of costly discipleship, the church is leaving people. Forgiveness and Reconciliation. Joseph is thrown into the well. My next post on the Biblical Counseling Movement will address problems in the movement’s theology.

Sometimes I’ll stumble across someone promoting my blog and they’ll say something like, “I don’t agree with everything this guy says, but his blog is pretty thought provoking.” Catherine Booth, A Woman's Right to Preach. Guest post: A biblical theology of clothing. Atonement as liturgy, not theory.