Lifesitenews. The Word of God. Doctrine The Word of God—In Creation "So shall my word be that goeth forth out of my mouth: it shall not return unto me void, but it shall accomplish that which I please, and it shall prosper in the thing whereto I sent it. 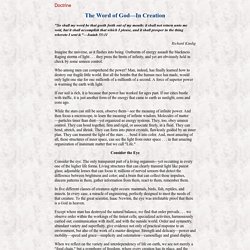 "—Isaiah 55:11 Richard Kindig Imagine the universe, as it flashes into being. Who among men can comprehend the power? If our soil is rich, it is because that power has worked for ages past. While the stars can still be seen, observe them—see the meaning of infinite power. Consider the Eye Consider the eye. In five different classes of creatures sight occurs: mammals, birds, fish, reptiles, and insects. Except where man has destroyed the natural balance, we find that order prevails . . . we observe order within the workings of the tiniest cells; specialized activities, harmoniously carried out; communication with itself, and with the outside world. Princes of Darkness: The Devil’s Many Faces in Scripture and Tradition. Belief in Satan — the embodiment of sin and evil who exists in reality as a personal being — has been a mainstay of Christian doctrine and popular belief since the earliest days of the faith. 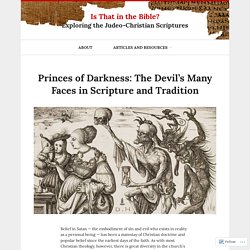 As with most Christian theology, however, there is great diversity in the church’s teachings on the devil, both past and present. Most Christians assume that the qualities commonly attributed to Satan are derived from clear and straightforward readings of the Bible, but are they really? Before we go looking at ancient texts, however, a brief examination of present-day beliefs is in order. Hal Lindsey, Satan Is Alive and Well on Planet Earth, published 1972 Not too surprisingly, the world’s largest Christian denomination — the Roman Catholic church — teaches in its Catechism that Satan is a real being, a fallen angel responsible for temptation and mankind’s fall. (Incidentally, discovering a denomination’s official theological positions online can be quite difficult. Leviathan and Mot. The Gloria From its Earliest Roots Through the 13th Century.

Catholic in the Ozarks: The Heresy of "Don't Judge. It's a popular narrative from the eighth chapter of John's gospel (John 8:1-11). 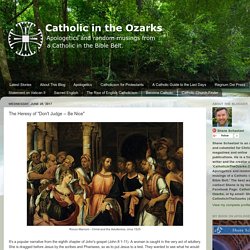 A woman is caught in the very act of adultery. She is dragged before Jesus by the scribes and Pharisees, so as to put Jesus to a test. They wanted to see what he would do with her. 4 Things about Western Christianity that Screwed Me Up (But It’s Never too late to Work on It) - Pete Enns. I don’t mean to complain, much less to sound petty. 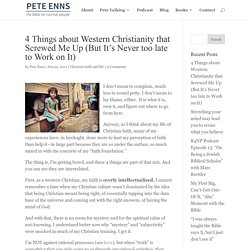 I don’t mean to lay blame, either. It is what it is, own it, and figure out where to go from here. Anyway, as I think about my life of Christian faith, many of my experiences have, in hindsight, done more to hurt my perception of faith than help it—in large part because they are so under the surface, so much mixed in with the concrete of my “faith foundation.” The thing is, I’m getting bored, and these 4 things are part of that mix. And you can see they are interrelated. 残酷的上帝:《圣经故事》感悟系列之一. God in Three Persons: A Doctrine We Barely Understand by Ray Pritchard. All Christians believe the doctrine of the Trinity. 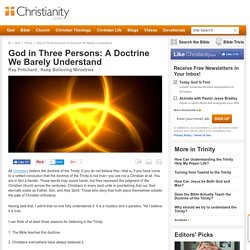 If you do not believe this—that is, if you have come to a settled conclusion that the doctrine of the Trinity is not true—you are not a Christian at all. You are in fact a heretic. Those words may sound harsh, but they represent the judgment of the Christian church across the centuries. Christians in every land unite in proclaiming that our God eternally exists as Father, Son, and Holy Spirit. What "No Salvation Outside the Church" Means. Skip to main content. 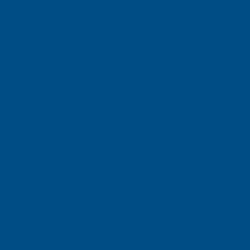 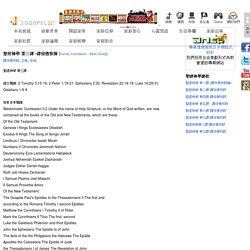 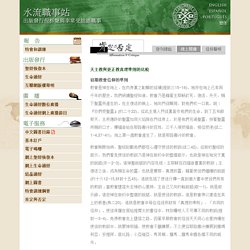 Eschatology. This quote from The First Christmas by Marcus Borg and Dominic Crossan is rather long, but I liked what it said and felt like it would be difficult to distill it down to something shorter: Eschatology is about the divine transformation of our earth. 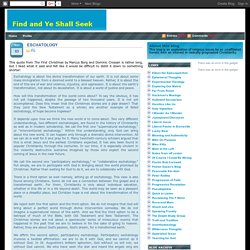 It is not about some mass immigration from a doomed world to a blessed heaven. A Jesuit View of Homosexuals and their Place in The Church. From America: National Catholic Magazine The journal of the Jesuit Society of America.

Simply Loving May 26-June 2, 2014 James Martin, SJ Everybody knows that same-sex marriage and homosexual acts are contrary to Catholic moral teaching. Most people who oppose same-sex marriage say they do not hate gay people, only that the traditional understanding of marriage is important and perpetually valid. Let me suggest a reason beyond the fact that many gays and lesbians disagree with church teaching on homosexual acts: only rarely do opponents of same-sex marriage say something positive about gays and lesbians without appending a warning against sin. Old Roman Symbol - Wikipedia. The Old Roman Symbol, or Old Roman Creed, is an earlier and shorter version of the Apostles’ Creed.[1] It was based on the 2nd-century Rules of Faith and the interrogatory declaration of faith for those receiving Baptism (3rd century or earlier),[1] which by the 4th century was everywhere tripartite in structure, following Matthew 28:19 ("baptizing them in the name of the Father and of the Son and of the Holy Spirit"[2]), which is part of the Great Commission.

According to Bible scholar John Norman Davidson Kelly, 2nd-century church fathers Tertullian and Irenaeus cite it in their works. Though the name "Apostles’ Creed" appears in a letter of Saint Ambrose (c. 390), what is now known as the Apostles’ Creed is first quoted in its present form in the early 8th century. It developed from the Old Roman Symbol, and seems to be of Hispano-Gallic origin, being accepted in Rome some time after Charlemagne imposed it throughout his dominions.[5] Latin and Greek versions[edit] Historic Church Documents at Reformed.org.

The Christian Church from the 1st to the 20th Century - Philip, Schaff - Google Books. The Bible and Interpretation - The Bible and Interpretation - The Last Supper & Passover: Overlooking the Obvious? The longstanding question of whether the Last Supper was a Passover meal may be resolved by an overlooked possibility: that Mark tried to transform an ordinary meal into a Passover observance by fashioning and inserting a single paragraph between (what we identify as) 14:11 and 17.

The proposed insertion revised the time-line of the surrounding original tradition that Jesus was to be arrested before Passover ("not during the feast"). Mark neglected, however, to explain what transpired to thwart that plan. Indeed, five to seven anomalies generated by Mark's proposed insertion vanish simultaneously when, reversing Mark's apparent procedure, we remove his offending paragraph.

I will not eat it again until it finds fulfillment in the Kingdom of God.”~ Luke 22:15-16 Jesus was a Jew and Jews were required, under the Law of Moses, to celebrate the Passover every year, to remember the Exodus from Egypt. The Last Supper, when Jesus ate with His disciples, was a Passover meal. The Four Cups of Wine of Passover – Possessing the Treasure. By Mike Ratliff And he took bread, and when he had given thanks, he broke it and gave it to them, saying, “This is my body, which is given for you.

Do this in remembrance of me.” And likewise the cup after they had eaten, saying, “This cup that is poured out for you is the new covenant in my blood. (Luke 22:19-20 ESV) Jesus and the Homosexual. By Lambert Dolphin A brochure on the door of the Episcopal Chaplain's office at Stanford University reads, "What did Jesus say about homosexuality? " When the brochure is opened the inside is completely blank. Episcopal Chaplain Penelope Duckworth explains, "For we, as Christians, pay particular attention to the words of our savior. Full text and video of Pope Francis’ call for Christian apology to homosexuals.

June 27, 2016 (LifeSiteNews) – We here present Pope Francis' full remarks echoing Cardinal Marx's call for Christians to apologize to homosexuals in the wake of the Orlando massacre. You can find a full English transcript of the pope's plane interview at Catholic News Agency here. Cindy Wooden, CNS: Holiness, within the past few days Cardinal Marx, the German, speaking at a large conference in Dublin which is very important on the Church in the modern world, said that the Catholic Church must ask forgiveness to the gay community for having marginalized these people. In the days following the shooting in Orlando, many have said that the Christian community had something to do with this hate toward these people. What do you think? Pope Francis: I will repeat what I said on my first trip. Pope Francis says Christians should apologize to gay people. Lifesitenews. 12 Myths About Calvinism - CredoHouse - Making Theology AccessibleCredoHouse – Making Theology Accessible.

1. Calvinism is not a system of theology that denies God’s universal love. While there are some Calvinists who do deny God’s universal love for all men, this is certainly not a necessary or a central tenet of Calvinism. Calvinists do, however, believe that God has a particular type of love for the elect (an “electing love”), but most also believe that God loves all people (John 3:16). It is a mystery to Calvinists as to why he does not elect everyone. (More on this here.) 2. Again, this is not representative of normative Calvinism. 3. Because of Calvinism’s high view of God’s sovereignty, many mistakenly believe that Calvinists hold God responsible for sin and evil. 彌撒經文. 信友彌撒經文. History of Temple Mount, Tabernacles of Moses, David and the ark of the covenant. Paul’s Eleven-Fold Cancellation of the Law. Pope Francis on LGBT Issues Is Out of Sync with Amoris Laetitia’s Overall Message, Say Theologians.

德日進神父的進化論與神觀. Should I Pray for God to Raise Someone from the Dead?Parchment and Pen Blog. 祈禱，是甚麼？ - 信仰百川. Sorry 我不想聽道了 - 信仰百川. The Source of Paul's Gospel. Jesus and Jesuits in Goa. Cinese, Chinese, Chinois, Chino, Chinês, Chinesisch, 天主教教理 (繁體中文) How Many Are Saved? - By Bishop Robert Barron. Feeding the Multitudes, Last Supper, Lord's Supper, Eucharist. What is Sin? The Original Hebrew word for "sin" has been wrongly translated... Its true meaning will pleasantly surprise you! Strong's Greek: 2920. κρίσις (krisis) TOP 10 BIBLE VERSES ABOUT THE FATHER. Was God known as Father in the Old Testament? Ezekiel 11:19; Ezekiel 36:26; Jeremiah 31:33; Hebrews 8:10. THE MESSIANIC BANQUET AND THE ESCHATOLOGY OF MATTHEW’S GOSPEL.

23 Bible verses about Messianic Banquet. ‘What Shall We Do with the Sabbath-Gatherer?’ A Narrative Approach to a ‘Hard Case’ in Biblical Law (Numbers 15:32-36)  »  Brill Online. Justice - Why did God kill a man for picking up sticks on the Sabbath? - Christianity Stack Exchange. Exodus 31:15 For six days work is to be done, but the seventh day is a day of sabbath rest, holy to the LORD. Whoever does any work on the Sabbath day is to be put to death. 德日進的進化生命觀 @ 清風明月靜觀自得.

從存有化角度看德日進宇宙觀的基督論. Pierre Teilhard de Chardin. Indulgences. The Catholic Church: A Dysfunctional Family. Is the New Catechism Catholic? Part 1. 對觀福音基督論脈絡-经典教程-天主教沧州（献县）教区网站. A Word About Faith. Christianity Stack Exchange. 6 Bible Verses for When Life isn’t Fair. How to Use This Study. 弗里德里希·施萊爾馬赫. The Doctrine of Transubstantiation in the Orthodox Church – Orthodoxy and Heterodoxy.