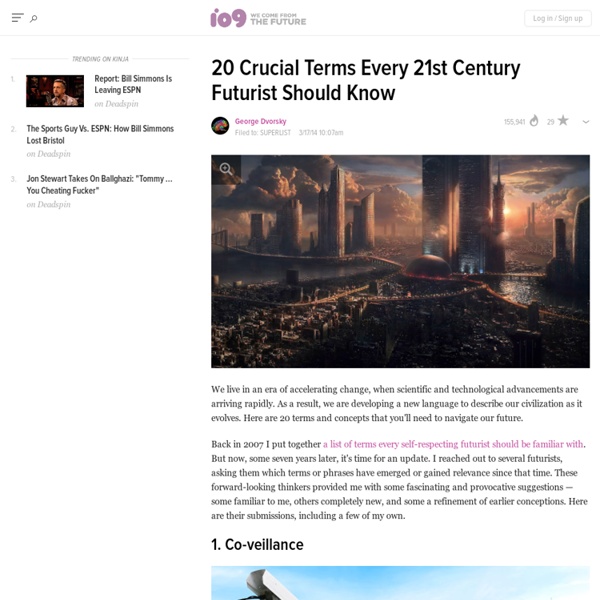 These concerns have given rise to another must-know term that could serve as a potential antidote: guaranteed minimum income. Good luck with that. Good luck dismissing this as crucial issue on our immediate horizon. How would it happen? There are very many people who have a lot of money who are not keen on income redistribution, and what's more, a lot of those people are in tech. The idea that all Big Tech people are progressives is a very big mistake. ETA it seems rather clear to me that there are a lot of tech people who have no problem with such unemployment because hey, it's not their fault people didn't go into STEM fields.

Technology singularity - News & Rumors Posts Tagged «technology singularity» Elon Musk warns us that human-level AI is ‘potentially more dangerous than nukes’ August 4, 2014 at 8:39 amElon Musk, the mastermind behind SpaceX and Tesla, believes that artificial intelligence is “potentially more dangerous than nukes,” imploring all of humankind “to be super careful with AI,” unless we want the ultimate fate of humanity to closely resemble Judgment Day from Terminator. Personally I think Musk is being a little hyperbolic — after all, we’ve survived more than 60 years of the threat of thermonuclear mutually assured destruction — but still, it’s worth considering Musk’s words in greater detail. What is transhumanism, or, what does it mean to be human?

Trend Micro launches Project 2020 web series: a glimpse into the future to help us prepare our cyber defences Tags: ICSPA , Europol , Project2020 , TrendMicro London, 23rd September 2013 - Trend Micro is proud to announce the launch of Project 2020, the web series: a set of online videos designed to get industry, business, government and other stakeholders thinking about the threats which may face them at the end of the decade so we can all better prepare for the future. The innovative nine video series will aim to bring to life the stories told in the Project 2020 white paper, which features at its core three scenarios designed to anticipate and illustrate how technology could be used and subverted in the future. It is hoped that these compelling videos will help to engage an even wider audience beyond the confines of the information security sphere. Trend Micro wants everyone from schoolchildren to policy makers to get something out of the project, so that all can become more mindful of where technology advancements may be heading and the security implications.

10 Big Mistakes People Make in Thinking About the Future Photo Credit: Frank Peters Being a working futurist means that I think a lot about how people think about the future. It also means spending a lot of time with people who are also thinking about their own futures. Typically, this involves a dialogue between three distinct groups. First, there's usually a small handful of very foresighted people, who are aware of their own blind spots and biases, and who are eager and open about the prospect of soaring into a wild blue sky to gather a lot of exciting new information. Second, there's a larger group of people who don't usually think at 50,000 feet -- but are willing to go there if they're with people they trust. When will Singularity happen – and will it turn Earth into heaven or hell? Defined as the point where computers become more intelligent than humans and where human intelligence can be digitally stored, Singularity hasn't happened yet. First theorised by mathematician John von Neumann in the 1950s, the 'Singularitarian Immortalist' (and Director of Engineering at Google) Ray Kurzweil thinks that by 2045, machine intelligence will be infinitely more powerful than all human intelligence combined, and that technological development will be taken over by the machines. "There will be no distinction, post-Singularity, between human and machine or between physical and virtual reality," he writes in his book 'The Singularity Is Near'. But – 2045?

7 potential doomsday scenarios and the tech that will make them possible The tech-pocalypse It's best not to put too much stock in doomsday theories. There are probably thousands of freak phenomena that, at any second, could literally wipe the human race off the face of the planet. That said, a little education on how the world might come to an end, mixed in with a bit of black humor, of course, might actually prevent that unfortunate future from ever coming to fruition. www.closertotruth Raymond "Ray" Kurzweil is an American author, inventor, futurist, and Director of Engineering at Google. Aside from futurology, he is involved in fields such as optical character recognition (OCR), text-to-speech synthesis, speech recognition technology, and electronic keyboard instruments. He is the author of several books on health, artificial intelligence (AI), transhumanism, the technological singularity, and futurism. Kurzweil is generally recognized as a public advocate for the futurist and transhumanist movements, due to his stances on life extension technologies, his efforts to forecast future advances in technology, and his interest in the concept of the technological singularity.

​We Made a Twitter Bot That Predicts the Future We’re all futurists, really. Speculation is part of life: We all muse, forecast, and daydream about our futures. We make sweeping, generalized predictions and specific, personal projections.