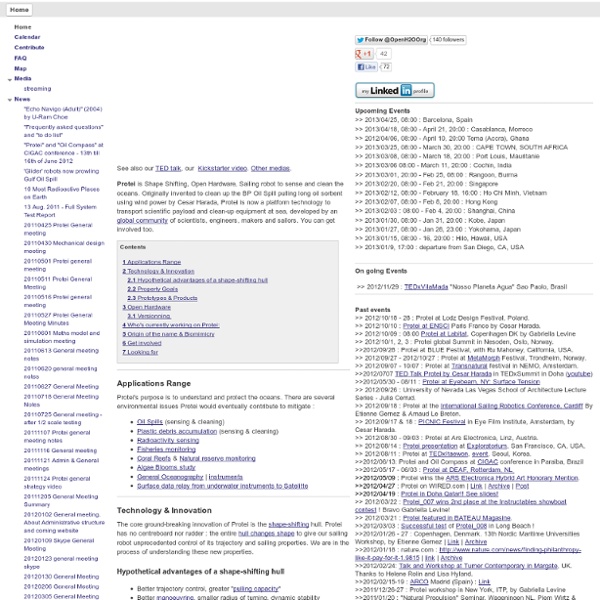 World's first" smartphone-controlled SmartPlane takes off By Darren Quick November 25, 2013 Parrot's AR Drone quadcopter has been strutting its smartphone-controlled stuff for a few years now, but fixed wing remote controlled aircraft have been a little thinner on the ground – and in the air. TobyRich, a German company specializing in smartphone-controlled gadgets, has now launched its SmartPlane, which it calls "the first smartphone-controlled airplane in the world." Here is a close-up of the lightweight plane: Full article here: SmartPlane Protei, Open Hardware Oil Spill Cleaning Sailing Robot by Cesar Harada We are developing Protei : a low-cost open-source oil collecting robot that autonomously sails upwind, intercepting oil sheens going downwind. Protei combines conventional technologies in an innovative design that we can implement in the short term to address timely environmental crisis such as the BP Oil Spill, cleaning the ocean gyre garbage patches or performing ocean research. We need your help to build our next prototype of Protei - the first articulated sailing boat that can tack upwind pulling a long heavy payload and initiating a revolutionary family in ocean robotics. A situation we must change Current Oil spill skimming technology was able to collect only 3% of the BP Deepwater Horizon Oil Spill. Observations and ideas from testing Spilled oil moves downwind from its source following surface currents. Versions - Protei_001 : front steering, Remote Controlled. - Protei_002 : articulated sailboat, Remote Controlled. What the money is for Deploy Protei team

FlowStone | Overview FlowStone uses a combination of graphical and text based programming. Applications are programmed by linking together functional building blocks called components. Events and data then flow between the links as the application executes. All this happens instantly - there's no compiling, your application runs as you build it making development an extremely rapid process. FlowStone allows you to create your own components using Ruby. The real power of FlowStone comes from modules. FlowStone can interface with a vast range of external hardware. This is one of the most powerful features of FlowStone. Once you are happy with your design running in the FlowStone environment you can simply click the export to EXE or VST buttons and your design will be wrapped up and made into a single, standalone program or plugin that you can run and distribute freely! Exported executables can be run on any PC, laptop, or even your own embedded hardware. You can try the software for seven days.

Eureqa Eureqa is a breakthrough technology that uncovers the intrinsic relationships hidden within complex data. Traditional machine learning techniques like neural networks and regression trees are capable tools for prediction, but become impractical when "solving the problem" involves understanding how you arrive at the answer. Eureqa uses a breakthrough machine learning technique called Symbolic Regression to unravel the intrinsic relationships in data and explain them as simple math. Using Symbolic Regression, Eureqa can create incredibly accurate predictions that are easily explained and shared with others. Over 35,000 people have relied on Eureqa to answer their most challenging questions, in industries ranging from Oil & Gas through Life Sciences and Big Box Retail. Eureqa One Page Overview (.pdf) »Visit the Eureqa Community » Eureqa utilizes a machine learning technique called Symbolic Regression to distill raw data into non-linear mathematical equations.

OpenROV Data Mining Image: Detail of sliced visualization of thirty video samples of Downfall remixes. See actual visualization below. As part of my post doctoral research for The Department of Information Science and Media Studies at the University of Bergen, Norway, I am using cultural analytics techniques to analyze YouTube video remixes. The following is an excerpt from an upcoming paper titled, “Modular Complexity and Remix: The Collapse of Time and Space into Search,” to be published in the peer review journal AnthroVision, Vol 1.1. The excerpt below is rather extensive for a blog post, but I find it necessary to share it in order to bring together elements discussed in previous posts on Remix and Cultural Analytics (see part 1 on the Charleston Mix, part 2 on Radiohead’s Lotus Flower, and part 3 on the Downfall parodies). The following excerpt references sliced visualizations of the three cases studies in order to analyze the patterns of remixing videos on YouTube.

5 of the Best Free and Open Source Data Mining Software The process of extracting patterns from data is called data mining. It is recognized as an essential tool by modern business since it is able to convert data into business intelligence thus giving an informational edge. At present, it is widely used in profiling practices, like surveillance, marketing, scientific discovery, and fraud detection. There are four kinds of tasks that are normally involve in Data mining: * Classification - the task of generalizing familiar structure to employ to new data* Clustering - the task of finding groups and structures in the data that are in some way or another the same, without using noted structures in the data.* Association rule learning - Looks for relationships between variables.* Regression - Aims to find a function that models the data with the slightest error. For those of you who are looking for some data mining tools, here are five of the best open-source data mining software that you could get for free: Orange RapidMiner Weka JHepWork

The Drone That Will Sail Itself Around the World | Autopia An Orange Pixel flickers on the horizon, sandwiched between the inky azure of the mid-Pacific and the robin’s-egg pale of the Hawaiian sky. Richard Jenkins is the first to see it—a sailing robot, which has been blowing our way for a month. We’re in a small motorboat 7 miles out at sea, just north of Oahu’s windward shore. Dylan Owens gets the next good glimpse. Jenkins and Owens are the engineering duo behind Saildrone, which in the words of their website is “a wind-powered autonomous surface vehicle.” The journey has included a storm with gale-force winds followed by two weeks of doldrums. As the vessel sails into sight, I see that it’s a streamliner—a narrow hull stabilized by two outriggers, one on each side. The Honey Badger is more than a sailboat and more than a robot, although it’s both of those things. Autonomous sailing craft could be used to gather information on the vast, untraveled reaches of the world’s oceans . But scientific and security uses are just the beginning. 1.