Extinct ibex is resurrected by cloning 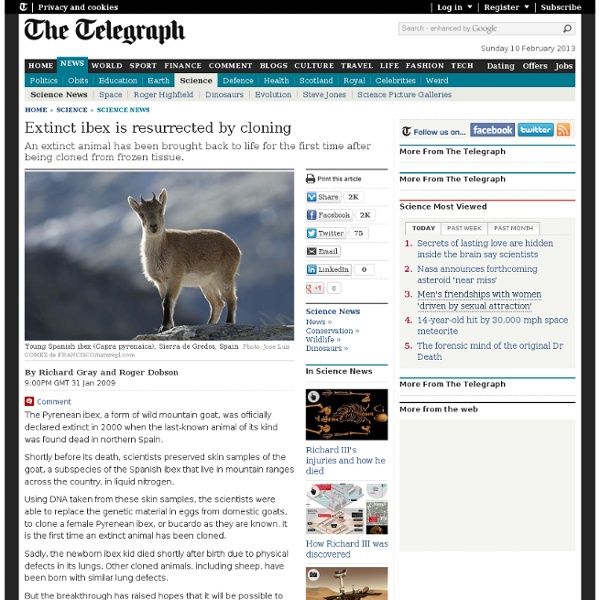 It has also increased the possibility that it will one day be possible to reproduce long-dead species such as woolly mammoths and even dinosaurs. Dr Jose Folch, from the Centre of Food Technology and Research of Aragon, in Zaragoza, northern Spain, led the research along with colleagues from the National Research Institute of Agriculture and Food in Madrid. He said: "The delivered kid was genetically identical to the bucardo. In species such as bucardo, cloning is the only possibility to avoid its complete disappearance." Pyrenean ibex, which have distinctive curved horns, were once common in northern Spain and in the French Pyrenees, but extensive hunting during the 19th century reduced their numbers to fewer than 100 individuals. They were eventually declared protected in 1973, but by 1981 just 30 remained in their last foothold in the Ordesa National Park in the Aragon District of the Pyrenees.

Bacteria engineered to turn carbon dioxide into liquid fuel Global climate change has prompted efforts to drastically reduce emissions of carbon dioxide, a greenhouse gas produced by burning fossil fuels. In a new approach, researchers from the UCLA Henry Samueli School of Engineering and Applied Science have genetically modified a cyanobacterium to consume carbon dioxide and produce the liquid fuel isobutanol, which holds great potential as a gasoline alternative. The reaction is powered directly by energy from sunlight, through photosynthesis. The research appears in the Dec. 9 print edition of the journal Nature Biotechnology and is available online. This new method has two advantages for the long-term, global-scale goal of achieving a cleaner and greener energy economy, the researchers say. While other alternatives to gasoline include deriving biofuels from plants or from algae, both of these processes require several intermediate steps before refinement into usable fuels. The research was supported in part by a grant from the U.S.

Harvard scientists reverse the ageing process in mice – now for humans | Science Scientists claim to be a step closer to reversing the ageing process after rejuvenating worn out organs in elderly mice. The experimental treatment developed by researchers at the Dana-Farber Cancer Institute, Harvard Medical School, turned weak and feeble old mice into healthy animals by regenerating their aged bodies. The surprise recovery of the animals has raised hopes among scientists that it may be possible to achieve a similar feat in humans – or at least to slow down the ageing process. An anti-ageing therapy could have a dramatic impact on public health by reducing the burden of age-related health problems, such as dementia, stroke and heart disease, and prolonging the quality of life for an increasingly aged population. "What we saw in these animals was not a slowing down or stabilisation of the ageing process. "This could lead to strategies that enhance the regenerative potential of organs as individuals age and so increase their quality of life.

Senecavirus Structure Revealed (Oh, And It Still Kills Cancer Cells 10,000 Times Better Than Traditional Chemotherapeutics) The Senecavirus is a "new" virus, discovered several years ago by Neotropix Inc., a biotech company in Malvern, Pennsylvania. It was at first thought to be a laboratory contaminant, but researchers found it was a pathogen, now believed to originate from cows or pigs. Further investigation found that the virus was harmless to normal human cells, but could infect certain solid tumors, such as small cell lung cancer, the most common form of lung cancer. Scientists at Neotrophix say that, in laboratory and animal studies, the virus demonstrates cancer-killing specificity that is 10,000 times higher than that seen in traditional chemotherapeutics, with no overt toxicity. The company has developed the "oncolytic" virus as an anti-cancer agent and is already conducting early phase clinical trials in patients with lung cancer. But the researchers still did not know how the virus worked, so they turned to Reddy. Senecavirus.

Scientists capture antimatter atoms in particle breakthrough Antihydrogen atoms were trapped in a magnetic fieldMatter and antimatter annihilate each other on contact"It's taken us five years to get here," says Professor Jeffrey HangstCERN's next ambition is to create a beam of antimatter (CNN) -- Scientists have captured antimatter atoms for the first time, a breakthrough that could eventually help us to understand the nature and origins of the universe. Researchers at CERN, the Geneva-based particle physics laboratory, have managed to confine single antihydrogen atoms in a magnetic trap. This will allow them to conduct a more detailed study of antihydrogen, which will in turn allow scientists to compare matter and antimatter. Understanding antimatter is one of the biggest challenges facing science -- most theoretical physicists and cosmologists believe that at the Big Bang, when the universe was created, matter and antimatter were produced in equal amounts. However, as our world is made up of matter, antimatter seems to have disappeared.

Graphene Will Change the Way We Live | Dr. Kaku's Universe The theory behind the substance graphene was first explored by theoretical physicist Philip Wallace in 1947 as kind of a starting point when he was doing research trying to understand the electronic properties of more complex, 3D graphite. although the name graphene wasn't actually coined until 40 years later, where it was used to describe single sheets of graphite. In other words, it's the name given to a flat monolayer of carbon atoms that are tightly packed into a 2D honeycomb lattice; like a molecular chicken-wire that is one atom thick. It's essentially the basic building block for graphitic materials of all other dimensionalities; it's a stepping stone to building bigger things. Since then, in the past 6 years, scientists have discovered that the substance retains some amazing properties. If you follow my work, you have surely heard me speak about Moore's Law and the race to find a suitable replacement for silicon semi-conductors.

Spray-on liquid glass is about to revolutionize almost everything (PhysOrg.com) -- Spray-on liquid glass is transparent, non-toxic, and can protect virtually any surface against almost any damage from hazards such as water, UV radiation, dirt, heat, and bacterial infections. The coating is also flexible and breathable, which makes it suitable for use on an enormous array of products. The liquid glass spray (technically termed “SiO2 ultra-thin layering”) consists of almost pure silicon dioxide (silica, the normal compound in glass) extracted from quartz sand. Water or ethanol is added, depending on the type of surface to be coated. There are no additives, and the nano-scale glass coating bonds to the surface because of the quantum forces involved. Liquid glass was invented in Turkey and the patent is held by Nanopool, a family-owned German company. The liquid glass spray produces a water-resistant coating only around 100 nanometers (15-30 molecules) thick. The liquid glass coating is breathable, which means it can be used on plants and seeds.