The Fun Personal Smartphone Robot that You Can Program 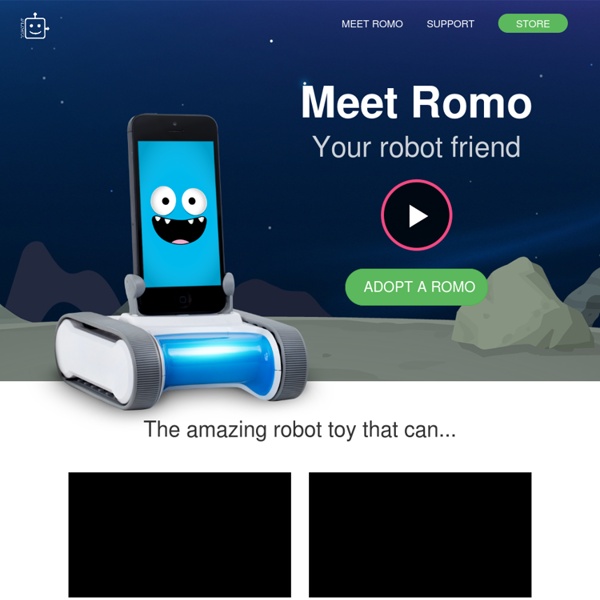 Connect with family and friends Guided Missions Learn basic programming concepts as you help Romo complete missions to prepare for the Robot Space Race! Discoverable Upgrades Along the way, unlock upgrades that make your Romo more expressive and alive. Unlimited Free Play Once you've mastered the art of programming Romo, unleash your creativity in the Lab, a free play mode. Definitely impressed with the robot's build quality -- it's clearly designed to survive amongst (young and old) children everywhere. Winner of Best High-Tech Toy at Toyfair 2013.

Code Monster from Crunchzilla <h2>Code Monster gets kids excited about programming. It is a combination of a game and tutorial where kids experiment with learning to code. <p> Code Monster use Javascript. Please enable Javascript if you want the play with the Code Monster. Otherwise, Code Monster will not be able to play with you. </p><p></h2> Portable rotary phone for this day and age The “Rotary Mechanical Smartphone” by designer Richard Clarkson is great for those who love old-fashioned designs. The electroplated copper phone features two interchangeable brass dials, a true rotary dial and a button dial. It’s similar to changing the lens of a camera.

Ten Resources for Helping Students Learn to Code and Program When the conversation amongst educators turns to programming, Scratch is often the first resource that is mentioned. Scratch allows students to program animations, games, and videos through a visual interface. Students create their programs by dragging together blocks that represent movements and functions on their screens. Teach Your Kids to Code: 6 Beginner's Resources for Parents Introducing computer programming to your kids can be a challenge, especially for those who aren’t familiar with the nuances of code. Fortunately, in the last few years, a number of apps, software, and guides have been produced that make the often-complex subject of computer coding easy to grasp for young learners. So where to begin? These are a few resources that parents can share with their kids to help them start learning about programming.

Three Video Games That Teach Programming Through Play Beta The Game (left) and Hack ‘n Slash (right) By Tanner Higgin, Graphite The push to get kids to code has been such a hot topic these past few years you might be sick of hearing about it. There are those that see code as a critical skill — like learning a second language – which all kids need to learn. Two Basic iPad Apps for Teaching Coding to Kids November 2, 2014 I got an email today from a teacher asking for some basic iPad coding apps to recommend to her kids. Actually I have already reviewed several coding apps in the past but for something to start with I would suggest the two titles below. Check them out and let us know what you think of them. 1- Daisy The Dinosaur Learn the basics of computer programming with Daisy the Dinosaur! This free, fun app has an easy drag and drop interface that kids of all ages can use to animate Daisy to dance across the screen.

Awesome Websites to Get Your Kids Hooked on Programming - TheITBros The success stories of people who used MOOCs (Massive Open Online Courses) to pick up new skills and even change careers aren’t exactly rare nowadays. You probably have heard of people learning how to code by signing up for classes on sites like Coursera, eDX, and Udacity, then leveraging the knowledge that they’ve gained to find jobs and/or internships. But what if your ten-year old kid expresses an interest in becoming a computer programmer?