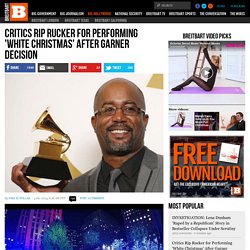 The song refers to snow, not to race, in recalling a traditional Christmas scene. Critics, however, believed that the mere reference to the color "white" by a black singer in the throes of a racially-charged controversy was offensive and suggested a contempt for the feelings of other black people. Rucker seemed unperturbed by the controversy, retweeting a photograph backstage with the Rockettes: Photo: Lucy Nicholson/Reuters Senior Editor-at-Large Joel B.

Ferguson violence broke the mold in three ways — one of which is just unfolding now. Even as the president, live from the White House, said “there is inevitably going to be some negative reaction, and it will make for good TV,” the news channels split their screens to show police shooting tear-gas canisters at protesters in Ferguson, Mo. — a presidential appeal for calm competing against frightening scenes of angry confrontation. 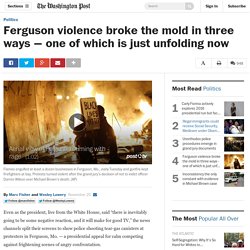 Monday night’s reaction to a grand jury’s decision not to indict the Ferguson police officer who killed an unarmed young black man in August consisted of peaceful protest in some places and vandalism and looting in others — a burst of violence so widely and persistently predicted that it seemed as much self-fulfilling prophecy as organic expression of rage.

Spontaneous or organized, riots have sporadically pierced the social compact through two and a half centuries of this country’s struggles over equality and opportunity. But August’s violence in Ferguson broke the mold in three important ways — one of which is just unfolding now. Obama on Garner: 'My Tradition is Not to Remark on Cases' The opposite is true: from Skip Gates to Trayvon Martin to Michael Brown, Obama nearly always weighs in. 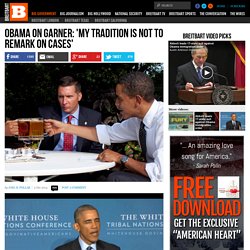 Even more bizarre was the fact that Obama upstaged New York City Mayor Bill de Blasio. The news networks had all been awaiting the mayor's press conference at 4:45 p.m. ET. Yet Obama broke in with his own remarks at about 4:43 p.m., interrupting his own pre-scheduled address to a gathering of Native American leaders at the White House to offer his take on the grand jury decision before local officials had their chance to react. There was no particular urgency to hear the president speak. With activists threatening to attack the Christmas tree lighting at the Rockefeller Center Wednesday evening, and demonstrators massing in Times Square, the mayor's message of non-violent protest was urgent. However, it is not clear, based on the available evidence, that there is much of a connection between the Garner case and earlier controversies. Senior Editor-at-Large Joel B. Obama Requests $263 Million for Police Body Cameras, Training. Obama Requests $263 Million for Police Body Cameras, Training President Barack Obama on Monday proposed new funding meant to help improve relations between police departments and minority communities, saying there is a "simmering distrust" between the two groups that extends well beyond the unrest in Ferguson, Missouri. 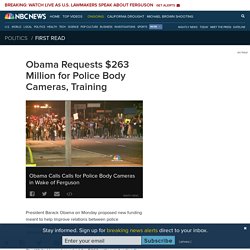 The White House has asked for $263 million in funding for police body cameras and training in the wake of the shooting death of unarmed 18-year-old Michael Brown. The program, which would need congressional approval, would offer a total of $75 million over three years to match state funding for the cameras by 50 percent, helping to pay for more than 50,000 of the devices. The announcement came as Obama held a series of meetings with law enforcement personnel, civil rights leaders and Cabinet officials to discuss possible reforms to ease mistrust towards police, particularly in minority communities.

"This is not a problem just of Ferguson, Missouri. Russian Space Object 2014-28E Sparks Worries About 'Satellite Killer' Satellite-watchers say a Russian object that was put into orbit six months ago has been behaving strangely, sparking worries that the craft is conducting a test run for anti-satellite warfare. 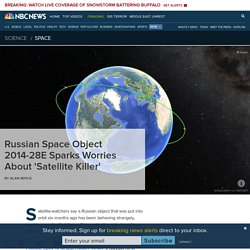 The object carries several designations — 2014-28E, or Cosmos 2499, or NORAD object 39765. It popped up in space along with three military communication satellites after a Russian Rokot-Briz launch in May, and at the time, experts assumed it was just a piece of space debris. But since that time, 2014-28E moved into a different orbit and then maneuvered back into a position near the launch vehicle's spent Briz-KM upper stage, according to reports circulating among satellite observers.