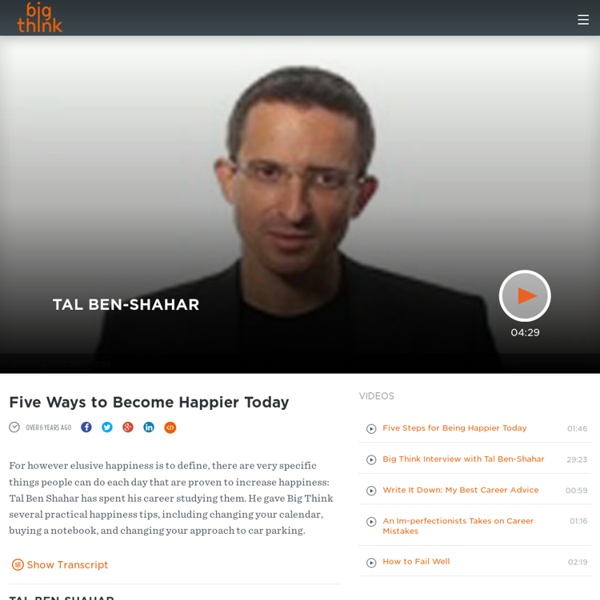 Transcript Question: What can people do each day to be happier? Tal Ben-Shahar: The first thing to do to become happier, paradoxically, is to accept painful emotions, to accept them as a part of being alive. You know, there are two kinds of people who don't experience painful emotions such as anxiety or disappointment, sadness, envy; two kinds of people who don't experience these painful emotions. They are the psychopaths and the dead. So if we experience painful emotions at time, it's actually a good sign. Question: Are there specific things people can do? Tal Ben-Shahar: Then I think -- yeah. Physical exercise contributes a great deal to happiness; in fact, there is research showing that regular exercise, three times a week for 30 to 40 minutes of aerobic exercise, could be jogging or walking or aerobics or dancing, three times a week of 30 to 40 minutes of exercise is equivalent to some of our most powerful psychiatric drugs in dealing with depression or sadness or anxiety.

TIME Magazine: Happiness The New Science of Happiness By Claudia Wallis January 17, 2005 Sugary white sand gleams under the bright Yucatan sun, aquamarine water teems with tropical fish and lazy sea turtles, cold Mexican beer beckons beneath the shady thatch of palapas?it's hard to imagine a sweeter spot than Akumal, Mexico, to contemplate the joys of being alive. How Seinfeld’s Productivity Secret Fixed My Procrastination Problem I’ve long been overwhelmed by an unwieldy list of goals that would sit, unaccomplished, in a long-term to-do list year after year. Then I came across a simple trick that solved my chronic problem. As gimmicky as it may sound, I’m now accomplishing everything I’d been putting off in just an hour a day. Here’s how you can, too.

Five Steps for Being Happier Today Tip 1: Accept painful emotions. Tal Ben-Shahar: The first thing to do to become happier, paradoxically, is to accept painful emotions, to accept them as a part of being alive. The paradox is that when we give ourselves the permission to be human, the permission to experience the full gamut of human emotion. We open ourselves up to positive emotions as well. Tip 2: Stop texting while you're with your friends.

Overcoming Procrastination Instantly Using Self Talk Changing how we talk to ourselves is the easiest and most powerful way to overcome procrastination. No other method that I know of disarms procrastination so rapidly and at such a fundamental level: that of our own thoughts. The Voices In Our Heads We’re talking to ourselves all the time inside our minds. Even when you’re not paying attention, these relentless mental debates deeply influence our feelings and, ultimately, our behavior. The good news is that just becoming aware of such mental dialogues — noticing patterns and turning them into productive statements — is usually all you need to overcome many unwelcome feelings and behaviors.

Getting started with "Getting Things Done" This article was originally posted during the first week of 43 Folders' existence, and, pound for pound, it remains our most popular page on the site. Please be sure to also visit related pages, browse our GTD topic area, plus, of course you can search on GTD across our family of sites. I’ll be talking a lot here in coming weeks about Getting Things Done, a book by David Allen whose apt subtitle is “The Art of Stress-Free Productivity.” You’ve probably heard about it around the Global Interweb or have been buttonholed by somebody in your office who swears by GTD.

Harvard’s Most Popular Course: Tal Ben-Shahar On How to Be Happier Harvard’s most popular course was a class on how to be happier. Dr. Tal Ben-Shahar taught Harvard University’s most popular course (in the Spring of 2006): a course on Positive Psychology; that is, he taught his students how to be happy. The course, called PSY 1504 – Positive Psychology, was described as follows: “The course focuses on the psychological aspects of a fulfilling and flourishing life. Topics include happiness, self-esteem, empathy, friendship, love, achievement, creativity, music, spirituality, and humor.”

How to buy happiness Authors: People fantasize about going on a buying spree if they win lotteryThe reality is that buying more stuff doesn't maximize happinessTheir research shows that giving things to others is more likely to make us happy Editor's note: Michael Norton is an associate professor at Harvard Business School. Elizabeth Dunn is a professor at the University of British Columbia. They are co-authors of the forthcoming book, "Happy Money: The Science of Spending" (Simon & Schuster). Norton spoke at TEDxCambridge. How to Do What You Love January 2006 To do something well you have to like it. That idea is not exactly novel. We've got it down to four words: "Do what you love." But it's not enough just to tell people that.

How To Be More Compassionate What is Compassion? Compassion is the feeling of empathy or sympathy towards a person in need. It is a sense of shared suffering and is generally regarded as the cornerstone of humanity. The Untapped Powers of the Smile By: Ron Gutman, founder and CEO of HealthTap Recently I made an interesting discovery while running – a simple act that made a dramatic difference and helped carry me through the most challenging segments of long distance runs: smiling. This inspired me to embark on a journey that took me through neuroscience, anthropology, sociology and psychology to uncover the untapped powers of the smile.

PERMA Model - Career Development from MindTools Bringing Well-Being and Happiness to Your Life Put yourself on the road to happiness. © iStockphoto/silberkorn