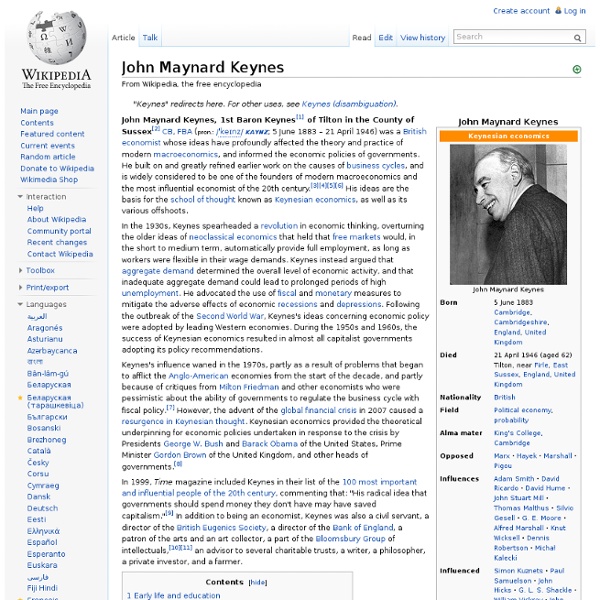 John Maynard Keynes, 1st Baron Keynes,[1] CB, FBA (/ˈkeɪnz/ KAYNZ; 5 June 1883 – 21 April 1946) was a British economist whose ideas have fundamentally affected the theory and practice of modern macroeconomics, and informed the economic policies of governments. He built on and greatly refined earlier work on the causes of business cycles, and is widely considered to be one of the founders of modern macroeconomics and the most influential economist of the 20th century.[2][3][4][5] His ideas are the basis for the school of thought known as Keynesian economics, and its various offshoots. In 1999, Time magazine included Keynes in their list of the 100 most important and influential people of the 20th century, commenting that: "His radical idea that governments should spend money they don't have may have saved capitalism."[10] He has been described by The Economist as "Britain's most famous 20th-century economist. Early life and education[edit] King's College, Cambridge. Career[edit]

You’ll Never Know Which Candidate Is Electable In a beige reception hall in a Des Moines suburb, over paper plates piled with the remains of a Monday morning continental breakfast, Sen. Bernie Sanders urged a packed house of Iowans to manifest their dreams. Imagine an America where cancer only kills you, rather than also rifling through your wallet. Visualize a future where no American child has to pay off her grandmother’s student loans. Cynicism is high and more than a quarter of us believe the American Dream is unattainable, but Sanders’s stump speech offered hope. “Everything is impossible until it’s not,” he said. Basic Overview of Budget Deficit Debates Balanced budget debate The budget deficit is often in the media spotlight. The budget deficit is defined as the difference between what the government spends and what the government collects. Government spending takes the form of salaries, defense spending, aid programs, and other cash outflows.

Peter Higgs Nobel Prize Laureate Peter Higgs during press conference in Stockholm, December 2013 Peter Ware Higgs CH FRS FRSE (born 29 May 1929) is a English theoretical physicist, Nobel Prize laureate and emeritus professor at the University of Edinburgh.[2] He is best known for his 1960s proposal of broken symmetry in electroweak theory, explaining the origin of mass of elementary particles in general and of the W and Z bosons in particular. This so-called Higgs mechanism, which was proposed by several physicists besides Higgs at about the same time, predicts the existence of a new particle, the Higgs boson (which was often described as "the most sought-after particle in modern physics"[3][4]). Early life and education[edit] In 1946, at the age of 17, Higgs moved to City of London School, where he specialized in mathematics, then in 1947 to King's College London where he graduated with a first class honours degree in Physics in 1950 and achieved a master's degree in 1952.

HuffPost is now a part of Verizon Media Gun control activist Fred Guttenberg, whose 14-year-old daughter Jaime was killed in the Parkland, Florida, school shooting, was escorted out of the House chamber on Tuesday night for protesting President Donald Trump’s remarks about guns during his State of the Union address. “What about victims of gun violence like my daughter?” Guttenberg shouted at Trump, the activist told HuffPost. Guttenberg, who was invited to the event by House Speaker Nancy Pelosi, shouted the protest as Trump spoke about the Second Amendment — which the president said was “under siege all across our country.”

The Greatest Economic Myth of the Century My candidate for “greatest economic myth of the century” was popularized by British economist John Maynard Keynes in the 1930s. He thought that massive government spending would halt recessions and lead to prosperity. The myth here is that government spending, i.e. the extracting of dollars from taxpayers and then handing them out to key groups by politicians, helps the economy as a whole. Keynes worded his theory this way: “To dig holes in the ground, paid for out of savings, will increase not only employment, but the real national dividend of useful goods and services.” Keynes’s idea that government spending, even just digging holes, will lead to prosperity was discredited shortly after he announced it in 1935 during the Great Depression.

Edward I of England Edward I (17 June 1239 – 7 July 1307), also known as Edward Longshanks and the Hammer of the Scots (Latin: Malleus Scotorum), was King of England from 1272 to 1307. The first son of Henry III, Edward was involved early in the political intrigues of his father's reign, which included an outright rebellion by the English barons. In 1259, he briefly sided with a baronial reform movement, supporting the Provisions of Oxford. After reconciliation with his father, however, he remained loyal throughout the subsequent armed conflict, known as the Second Barons' War. After the Battle of Lewes, Edward was hostage to the rebellious barons, but escaped after a few months and joined the fight against Simon de Montfort. Montfort was defeated at the Battle of Evesham in 1265, and within two years the rebellion was extinguished.

Burton W. Folsom, Jr. Burton W. Folsom, Jr. (born 1947 in Nebraska) is an American historian and author who holds the Charles F. Kline chair in history and management at Hillsdale College. Biography[edit] Folsom received his BA from Indiana University in 1970, his M.A. from the University of Nebraska in 1973, and his doctorate in history from the University of Pittsburgh in 1976. Richard I of England Richard I (8 September 1157 – 6 April 1199) was King of England from 6 July 1189 until his death. He also ruled as Duke of Normandy (as Richard IV), Duke of Aquitaine, Duke of Gascony, Lord of Cyprus, Count of Anjou, Count of Maine, Count of Nantes, and Overlord of Brittany at various times during the same period. He was the third of five sons of King Henry II of England and Eleanor of Aquitaine. He was known as Richard Cœur de Lion, or mainly Richard the Lionheart, even before his accession, because of his reputation as a great military leader and warrior.[1] The Muslims called him Melek-Ric (King Richard) or Malek al-Inkitar (King of England).[2] Early life and accession in Aquitaine[edit] Family and youth[edit]

Chris Matthews Christopher John Matthews (born December 17, 1945) is an American political commentator, talk show host, and author. Matthews hosts his weeknight hour-long talk show, Hardball with Chris Matthews, on MSNBC. From 2002 to 2013, Matthews hosted a syndicated NBC News–produced panel discussion program on weekends titled The Chris Matthews Show. Matthews regularly appears on other NBC and MSNBC news programs as well. Hillsdale College Hillsdale College is a co-educational liberal arts college in Hillsdale, Michigan, United States.National Review has described Hillsdale as a "citadel of American conservatism."[2][3] Most of the curriculum is based on and centered around the teaching of the Western heritage as a product of both the Greco-Roman culture and the Judeo-Christian tradition. Hillsdale requires every student, regardless of major, to complete a core curriculum that includes courses on the Great Books and the U.S. Constitution.[4] History[edit]

Nathan Mayer Rothschild Nathan Mayer, Freiherr von Rothschild (16 September 1777 – 28 July 1836), known as Nathan Mayer Rothschild, was a London-based Ashkenazi Jewish banker and financier and one of five sons of the second-generation of the Rothschild banking dynasty. He was born in Frankfurt am Main, the fourth child of Mayer Amschel Rothschild (1744–1812) and Gutle Schnapper (1753–1849). Life[edit] In 1798, at the age of 21, he settled in Manchester and established a business in textile trading and finance, later moving to London, England and making a fortune in trading bills of exchange through a banking enterprise begun in 1805. In 1816, his two elder brothers were granted noble status (Freiherr or Baron) by the Emperor of Austria. They were now permitted to prefix the Rothschild name with von or de.

Herbert Hoover 31st president of the United States Hoover was born to a Quaker family in West Branch, Iowa. He took a position with a London-based mining company after graduating from Stanford University in 1895. After the outbreak of World War I, he became the head of the Commission for Relief in Belgium, an international relief organization that provided food to occupied Belgium. When the U.S. entered the war, President Woodrow Wilson appointed Hoover to lead the Food Administration, and Hoover became known as the country's "food czar". James S. Brady Press Briefing Room Briefing room in the White House President George W. Bush participates in the unveiling of the new Brady Briefing Room on July 11, 2007.