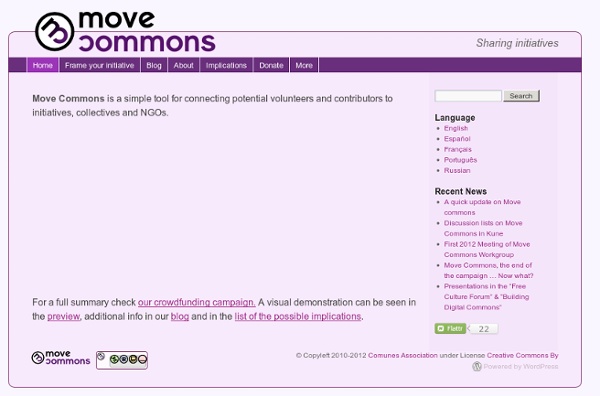 The Zero Marginal Cost Society About | Comunes Comunes is a non-profit collective dedicated toa) Encourage the protection and expansion of the Commons [1] through our actions. The Comunes approach has the Commons as central idea, using it as a guideline for its actions. It facilitates the discovery and construction of alternatives following a simple rule of three, and it encourages decentralized collaboration through the commons-based peer production. The world elites can be seen [2] as social networks, in which each elite member is a node. When an elite member falls for any reason (e.g. media scandals), the network survives and its ability to develop plans is untouched: it will just re-wire covering the hole left by the missing member, as every social network does (as there are multiple paths for communicating two nodes). On the other hand, we in Comunes see the world of social movements, NGOs and grassroots collectives as another social network, but this time open and public. Difficult to form a new node.

Kune: a web tool to encourage collaboration, content sharing and free culture Post Capitalism (plus 5 layers of Corporate Transformation) The post is also available in Italian here. The Zero Marginal Cost Society In the last few days a number of, more or less enjoyable, articles introducing the latest book by Jeremy Rifkin, released earlier in March, saw the light on all the most important online newspapers worldwide. In his latest book called “The Zero Marginal Cost Society” the well-known American author recounts his vision: the eclipse of capitalism is coming soon and will be in favor of a completely new model that he dubs “the Collaborative Commons”. In one passage at the opening of the editorial oped that Rifkin published recently on several online outlets he says that “the capitalist era is passing” in a way that inevitable, and that the “new economic paradigm, the Collaborative Commons, is starting to “transform the way we live”. Rifkin adds that “we are already seeing the emergence of, a hybrid economy part market capitalism and a part Collaborative Commons“. The Collaborative Commons Products and Services Knowledge

Contributors - ourproject.org wiki Contributors in Comunes and Ourproject The Comunes Collective is solely driven by volunteers. Nowadays we are a few, and need your help to go on. If you like what we do, please check our list of possible tasks, as you might find stuff you would enjoy contributing with. If you have a technical profile, you might want to check our call for developers. For a more systematic collaboration, you can also check out our trainings. This wiki document is intended to be a main resource to help those first-time collaborators or trainees, that usually find difficult how to start. For all contributors there are some recommended texts and Firefox extensions that might be useful. How do we organize Introduction We all Comunes contributors organize in "Teams". A mailing list for internal communication (and sometimes another one external, for announcements) A TO-DO task list* A Team members list A section in this wiki Periodical online meetings by chat, when agreed The Teams The current active Teams are:

Comunes collective A New Paradigm in Economic Thinking | Principled Societies Project Building Digital Commons Kultur-O-Meter · Investigación sobre cultura en Madrid. Soak the Rich This exchange is from a conversation in Paris between David Graeber and Thomas Piketty, discoursing on the deep shit we’re all in and what we might do about climbing out. It was held at the École Normale Supérieure; moderated by Joseph Confavreux and Jade Lindgaard; edited by Edwy Plenel; first published by the French magazine Mediapart last October; and translated from the French for The Baffler by Donald Nicholson-Smith. Moderators: You both appear to think that the prevailing economic and financial system has run its course, and cannot endure much longer in its present form. I would like to ask each of you to explain why. Thomas Piketty: I am not sure that we are on the eve of a collapse of the system, at least not from a purely economic viewpoint. Karl Marx thought that the falling rate of profit would inevitably bring about the fall of the capitalist system. But, in itself, this does not mean an economic collapse will occur. Piketty: Yes. Piketty: That is an interesting question.