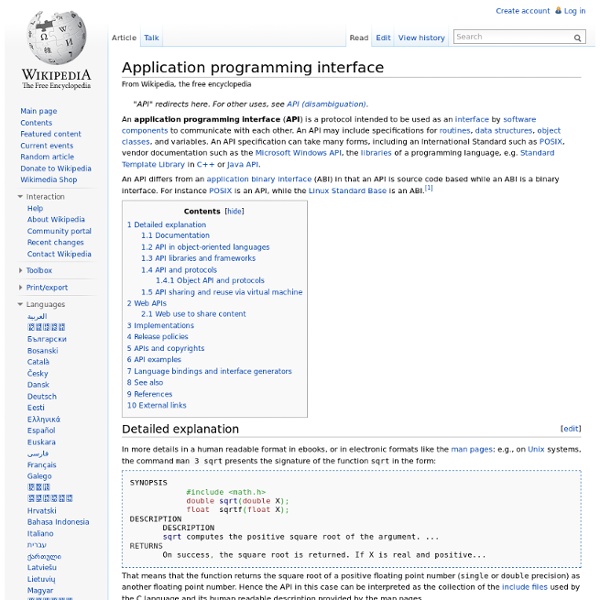 In computer programming, an application programming interface (API) specifies how some software components should interact with each other. Detailed explanation[edit] API in procedural languages[edit] In most procedural languages, an API specifies a set of functions or routines that accomplish a specific task or are allowed to interact with a specific software component. This specification is presented in a human readable format in paper books, or in electronic formats like ebooks or as man pages. For example, the math API on Unix systems is a specification on how to use the mathematical functions included in the math library. The Unix command man 3 sqrt presents the signature of the function sqrt in the form: SYNOPSIS #include <math.h> double sqrt(double X); float sqrtf(float X); DESCRIPTION sqrt computes the positive square root of the argument. ... $ perldoc -f sqrt sqrt EXPR sqrt #Return the square root of EXPR. API in object-oriented languages[edit] API libraries and frameworks[edit]

Health Care Health care (or healthcare) is the diagnosis, treatment, and prevention of disease, illness, injury, and other physical and mental impairments in humans. Health care is delivered by practitioners in allied health, dentistry, midwifery-obstetrics , medicine, nursing, optometry, pharmacy and other care providers. It refers to the work done in providing primary care, secondary care, and tertiary care, as well as in public health. Access to health care varies across countries, groups, and individuals, largely influenced by social and economic conditions as well as the health policies in place. Health care can contribute to a significant part of a country's economy. Health care is conventionally regarded as an important determinant in promoting the general physical and mental health and well-being of people around the world. Health care delivery[edit] Primary care may be provided in community health centres. Primary care[edit] Secondary care[edit] Tertiary care[edit] Quaternary care[edit]

OAuth FAQ Updated on Sat, 2011-07-09 07:47 General What is OAuth? OAuth is an authentication protocol that allows users to approve application to act on their behalf without sharing their password. More information can be found at oauth.net or in the excellent Beginner's Guide to OAuth from Hueniverse. Where do I create an application? You can create new applications on the Twitter Developer Site at When are you going to turn off Basic Auth? We announced in December of 2009 the deprecation of Basic Auth. Can my application continue to use Basic Auth? You can continue to use Basic Auth until the turn off date, but we strongly recommend moving to OAuth now. How do I convert my Basic Auth application to OAuth? Conversion is largely dependent on the programming language and libraries that you use. Technical How long does an access token last? We do not currently expire access tokens. The application registration page asks about read/write access.

Creating 2D Action Games with the Game API Oracle Technology Network > Java Software Downloads View All Downloads Top Downloads New Downloads What's New Java in the Cloud: Rapidly develop and deploy Java business applications in the cloud. Essential Links Developer Spotlight Java EE—the Most Lightweight Enterprise Framework? Blogs Technologies Contact Us About Oracle Cloud Events Top Actions News Key Topics Oracle Integrated Cloud Applications & Platform Services What is SSL? SSL (Secure Sockets Layer) is the standard security technology for establishing an encrypted link between a web server and a browser. This link ensures that all data passed between the web server and browsers remain private and integral. SSL is an industry standard and is used by millions of websites in the protection of their online transactions with their customers. To be able to create an SSL connection a web server requires an SSL Certificate. The Public Key does not need to be secret and is placed into a Certificate Signing Request (CSR) - a data file also containing your details. The complexities of the SSL protocol remain invisible to your customers. Typically an SSL Certificate will contain your domain name, your company name, your address, your city, your state and your country. Be sure to visit SSLTools.com for some great services and tools to assist in your implementation of ssl on your site or if you want to examine the ssl certificates of other websites.

Law "Legal concept" redirects here. Lady Justice, a symbol of justice. She is depicted as a goddess equipped with three items: a sword, symbolising the coercive power of a court; scales, representing an objective standard by which competing claims are weighed; and a blindfold indicating that justice should be impartial and meted out objectively, without fear or favor and regardless of money, wealth, power or identity.[1] Law is a term which does not have a universally accepted definition,[2] but one definition is that law is a system of rules and guidelines which are enforced through social institutions to govern behaviour.[3] Laws can be made by legislatures through legislation (resulting in statutes), the executive through decrees and regulations, or judges through binding precedents (normally in common law jurisdictions). To implement and enforce the law and provide services to the public by public servants, a government's bureaucracy, military, and police are vital. Definition[edit]

WebKit WebKit is available under a BSD-form license[11] with the exception of the WebCore and JavaScriptCore components, which are available under the GNU Lesser General Public License. As of March 7, 2013, WebKit is a trademark of Apple, registered with the U.S. Patent and Trademark Office.[12] Origins[edit] According to Apple, some changes involved OS X-specific features (e.g., Objective-C, KWQ,[15] OS X calls) that are absent in KDE's KHTML, which called for different development tactics.[16] Split development[edit] The exchange of code between WebCore and KHTML became increasingly difficult as the code base diverged because both projects had different approaches in coding and code sharing.[17] At one point KHTML developers said they were unlikely to accept Apple's changes and claimed the relationship between the two groups was a "bitter failure".[18] Apple submitted their changes in large patches containing very many changes with inadequate documentation, often to do with future additions.

Collaborative Methods: Share API Java Library I hope you guys are having fun playing with our APIs. To make things a bit easier, here is a Java library that you can use that takes care of all the nasty authentication and XML formatting bits. It could also be of use as reference for those of you developing libraries in other languages. There are a few dependencies: commons httpclient, logging, codec, and json.jar. Coming soon, the ActionScript library. SQLite SQLite is ACID-compliant and implements most of the SQL standard, using a dynamically and weakly typed SQL syntax that does not guarantee the domain integrity. SQLite is a popular choice as embedded database for local/client storage in application software such as web browsers. It is arguably the most widely deployed database engine, as it is used today by several widespread browsers, operating systems, and embedded systems, among others.[5] SQLite has many bindings to programming languages. The source code for SQLite is in the public domain.[2][6] Design[edit] History[edit] D. In 2011 Hipp announced his plans to add an UnQL interface to SQLite databases and to develop UnQLite, an embeddable document-oriented database.[8] Howard Chu ported SQLite 3.7.7.1 to use Openldap MDB instead of the original Btree code and called it sqlightning. Features[edit] SQLite full Unicode support is optional.[14] As of version 3.8.2 it's possible to create tables without rowid.[16] Development[edit] Adoption[edit]

Apache Lucene! Regedit is disabled by the administrator [Solved] | Kioskea.net First Method: Click Start -> Run -> gpedit.msc -> User Configuration -> Administrative Templates -> System -> Prevent access to registry editing tools -> Right Click Properties -> Set it to Not Configured. Second Method: Click Start -> Run. Type this command in Run box and press Ok. REG add HKCU\Software\Microsoft\Windows\CurrentVersion\Policies\System /v DisableRegistryTools /t REG_DWORD /d 0 Then a prompt will come up with this question: Value DisableRegistryTools exists, overwrite (Y/N)? Type yes and hit Enter. After u did that also type this command in the run box and hit enter. REG add HKLM\Software\Microsoft\Windows\CurrentVersion\Policies\System /v DisableRegistryTools /t REG_DWORD /d 0 Then it will also come up with the question: Value DisableRegistryTools exists, overwrite (Y/N)? Third Method: STEP1. STEP2.Create a new shortcut on your desktop, point it to "C:\Windows\regedit.exe" STEP3.Log off, then log back on. STEP4.As soon as you see your desktop, double click on the shortcut.