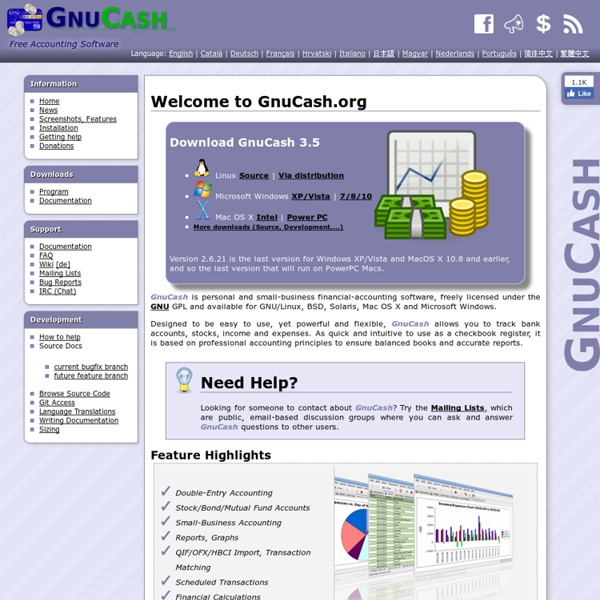 The GnuCash development team proudly announces GnuCash 2.5.10, the eleventh release in the 2.5.x series of the GnuCash Free Accounting Software. It runs on GNU/Linux, *BSD, Solaris and Mac OSX. WARNING: This is an UNSTABLE version of GnuCash. This release is intended for everyone who wants to help find bugs and other problems to make the eventual stable release better. Make sure you make backups of any files used in testing versions of GnuCash in the 2.5.x series. Although the developers go to great lengths to ensure that no data will be lost we cannot guarantee that your data will not be affected if for some reason GnuCash crashes in testing these releases.

openesignforms - Open eSignForms is the first open source electronic contracting software Open eSignForms™ is the first free and open source, web contracting software application (on-premise) and SaaS (hosted). Yozons was the first to create an entirely web-based e-signature platform (no need for digital certificates, plugins, etc.) with its Signed & Secured™ service released in June 2001, with GE Capital as its first major customer just a few months later. Open eSignForms can help your school, non-profit, medical facility, or business go green by improving on your paperless activities. Just use any of our free forms to help with secure document delivery with external parties and e-docs to storing files and scanned paperwork (fully encrypted) for your own secure access from anywhere in the world. NOTE: In January 2014, for lack of any valid reason, Google discontinued the download feature here, which of course was the main way our open source users have retrieved the code for non-programmer use.

Mixxx - Free MP3 DJ Mixing Software Vereinsbuchhaltung Dolibarr - Open Source - Gestion Commerciale pour les TPE Math Help An Engineers Quick References to Mathematics Algebra Help Math SheetThis algebra reference sheet contains the following algebraic operations addition, subtraction, multiplication, and division. It also contains associative, commutative, and distributive properties. There are example of arithmetic operations as well as properties of exponents, radicals, inequalities, absolute values, complex numbers, logarithms, and polynomials. Contratto - Oscon Vereinsverwaltung Online How To: Protect Any PC Using Windows Steady State One of the biggest challenges Maximum PC readers often face is the never ending battle we endure when it comes to restoring the PC’s of family and friends. We often find ourselves bombarded with machines that may have once been configured by us, but have become infected or modified beyond recognition. The good news is that Microsoft finally has a solution and it comes in the form of a free add on for Windows XP and Vista which promises to restore sanity to your world. Windows Steady State goes far beyond a simple group policy editor. It gives users the protection and peace of mind that until now could only be matched by a virtual machine. Simply put, Windows Steady State gives you nearly unlimited control over what can and cannot be done on a protected PC.

25+ Best PC repair Utility Tools Most of the time our PC will get repaired for no reason. It may be due to some corrupt files or may be due to virus. It’s really very difficult to predict what could have caused the problem. Sometimes even simple issue in registry can also make your PC to reboot automatically. We may think that this errors can’t be solved and almost everyone use to Format the windows drive. Old Laptop Upgrades SExpand Click to viewLike a famed race horse or a classic book, you don't just throw away a laptop because it's banged up a little. Even if it seems outdated and underpowered, most any laptop is still small, quiet, and relatively low on power consumption, making it a seriously valuable spare to keep handy—even without a working screen. With some free software, a little know-how, and some creative thinking about your home network, nearly any old laptop can find its second wind, and today I'll run through some of the best ways to get it there.Photo by daveynin.P Create a no-monitor, low-power spare systemP