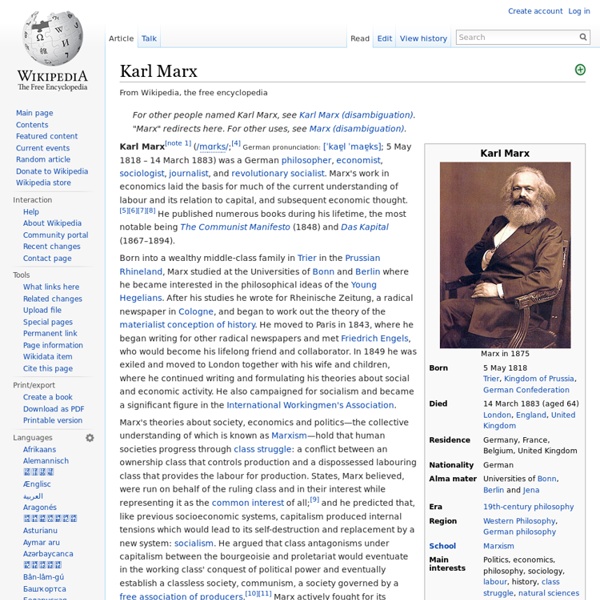 Karl Marx[note 1] (/mɑrks/;[4] German pronunciation: [ˈkaɐ̯l ˈmaɐ̯ks]; 5 May 1818 – 14 March 1883) was a German philosopher, economist, sociologist, journalist, and revolutionary socialist. Marx's work in economics laid the basis for much of the current understanding of labour and its relation to capital, and subsequent economic thought.[5][6][7][8] He published numerous books during his lifetime, the most notable being The Communist Manifesto (1848) and Das Kapital (1867–1894). Born into a wealthy middle-class family in Trier in the Prussian Rhineland, Marx studied at the Universities of Bonn and Berlin where he became interested in the philosophical ideas of the Young Hegelians. After his studies he wrote for Rheinische Zeitung, a radical newspaper in Cologne, and began to work out the theory of the materialist conception of history. Early life[edit] Childhood and early education: 1818–1835[edit] Karl Marx was born on 5 May 1818 to Heinrich Marx and Henrietta Pressburg (1788-1863).

Max Weber Karl Emil Maximilian "Max" Weber (German: [ˈmaks ˈveːbɐ]; 21 April 1864 – 14 June 1920) was a German sociologist, philosopher, and political economist whose ideas influenced social theory, social research, and the entire discipline of sociology.[3] Weber is often cited, with Émile Durkheim and Karl Marx, as among the three founding creators of sociology.[4][5][6] Weber also made a variety of other contributions in economic history, as well as economic theory and methodology. Weber's analysis of modernity and rationalisation significantly influenced the critical theory associated with the Frankfurt School. After the First World War, Max Weber was among the founders of the liberal German Democratic Party. He also ran unsuccessfully for a seat in parliament and served as advisor to the committee that drafted the ill-fated democratic Weimar Constitution of 1919.

Marxism and the Social Sciences This year is the twenty-fifth anniversary of the death of Maurice Dobb (1900-1976), the foremost Marxian economist of his generation in Britain. Dobb was for many years a Reader in economics at Cambridge University and a Fellow of Trinity College. He assisted Piero Sraffa in editing David Ricardo’s Works, and was noted for his contributions to value theory, the theory of economic planning, and the analysis of Soviet economic development. (During the 1950s and ’60s he contributed to Monthly Review on four occasions, mostly on socialist economic planning.)

Émile Durkheim David Émile Durkheim (French: [emil dyʁkɛm] or [dyʁkajm];[1] April 15, 1858 – November 15, 1917) was a French sociologist, social psychologist and philosopher. He formally established the academic discipline and, with Karl Marx and Max Weber, is commonly cited as the principal architect of modern social science and father of sociology.[2][3] Durkheim was also deeply preoccupied with the acceptance of sociology as a legitimate science. Karl Marx 1. Marx’s Life and Works Karl Marx was born in Trier, in the German Rhineland, in 1818. Although his family was Jewish they converted to Christianity so that his father could pursue his career as a lawyer in the face of Prussia’s anti-Jewish laws. Teleology A teleology (from Ancient Greek telos, meaning roughly "end" or "purpose",[1] and -logia, meaning "study of, discourse") is an account of a given thing's end or purpose. For instance, we might give a teleological account of why forks have prongs by showing their purpose—how the design helps humans to eat certain foods. Stabbing food and helping humans eat is what forks are for.

International Encyclopedia of Economic Sociology:  Marx, Karl This essay first appeared in the International Encyclopedia of Economic Sociology, edited by Jens Beckert and Milan Zafirovski (London and New York: Routledge, 2006, pp. 434-437). It was posted as a Notablog entry on 4 January 2006. Comments welcome (post here). Few thinkers have had as much influenceon the social sciences as the German social theorist Karl Marx (1818–83). Immanuel Kant Immanuel Kant (/kænt/;[1] German: [ɪˈmaːnu̯eːl kant]; 22 April 1724 – 12 February 1804) was a German philosopher who is widely considered to be a central figure of modern philosophy. He argued that fundamental concepts structure human experience, and that reason is the source of morality. His thought continues to have a major influence in contemporary thought, especially the fields of metaphysics, epistemology, ethics, political philosophy, and aesthetics.[2] Kant's major work, the Critique of Pure Reason (Kritik der reinen Vernunft, 1781),[3] aimed to explain the relationship between reason and human experience. With this project, he hoped to move beyond what he took to be failures of traditional philosophy and metaphysics.