The Construction of Femininity and Masculinity in Shakespeare`s Macbeth - Vinzent Fröhlich - Google Könyvek. "Male and Female Created He Them": Sex and Gender in "Macbeth" on JSTOR. "A Strange Infirmity": Lady Macbeth's Amenorrhea on JSTOR. Fantasizing Infanticide: Lady Macbeth and the Murdering Mother in Early Modern England on JSTOR. "Be Bloody, Bold and Resolute": Tragic Action and Sexual Stereotyping in "Macbeth" on JSTOR. Macbeth and Hercules on JSTOR. The Perversion of Manliness in Macbeth on JSTOR. Shakespeare's Globe. Heuristic Shakespeare : The Tempest - Heuristic Media.

“I can imagine generations who will owe a lifelong love of Shakespeare to this astonishing app” - Stephen Fry The Tempest from Heuristic Shakespeare is the first in a collection of thirty-seven separate apps. 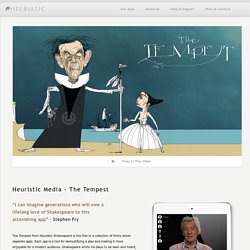 Each app is a tool for demystifying a play and making it more enjoyable for a modern audience. Shakespeare wrote his plays to be seen and heard, not read. Heuristic Shakespeare apps put you face to face with his characters at the heart of each play. It makes his language and references easily accessible and helps you understand each play from the inside out. The First of Many! Educators We have a special program for colleges and universities. Occult Knowledge, Science, and Gender on the Shakespearean Stage - Mary Floyd-Wilson - Google Könyvek. Renaissance magic. Renaissance humanism (15th and 16th century) saw a resurgence in hermeticism and Neo-Platonic varieties of ceremonial magic. 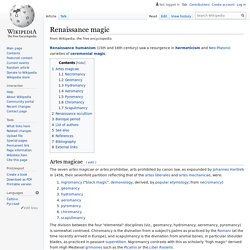 Artes magicae[edit] The seven artes magicae or artes prohibitae, arts prohibited by canon law, as expounded by Johannes Hartlieb in 1456, their sevenfold partition reflecting that of the artes liberales and artes mechanicae, were: The division between the four "elemental" disciplines (viz., geomancy, hydromancy, aeromancy, pyromancy) is somewhat contrived. Chiromancy is the divination from a subject's palms as practiced by the Romani (at the time recently arrived in Europe), and scapulimancy is the divination from animal bones, in particular shoulder blades, as practiced in peasant superstition. Nigromancy contrasts with this as scholarly "high magic" derived from High Medieval grimoires such as the Picatrix or the Liber Rasielis. Necromancy[edit] Geomancy[edit] Hydromancy[edit] 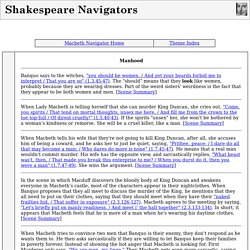 The "should" means that they look like women, probably because they are wearing dresses. Part of the weird sisters' weirdness is the fact that they appear to be both women and men. [Scene Summary] When Lady Macbeth is telling herself that she can murder King Duncan, she cries out, "Come, you spirits / That tend on mortal thoughts, unsex me here, / And fill me from the crown to the toe top-full / Of direst cruelty! " When Macbeth tells his wife that they're not going to kill King Duncan, after all, she accuses him of being a coward, and he asks her to just be quiet, saying, "Prithee, peace: / I dare do all that may become a man; / Who dares do more is none" (1.7.45-47).

Gender Politics in "Macbeth" The Philosophy of Today, Episode 05. Phlit: A Newsletter on Philosophy and Literature: The Hermetic Shakespeare: 2005-9 C. September 24, 2005 1. 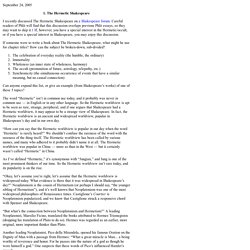 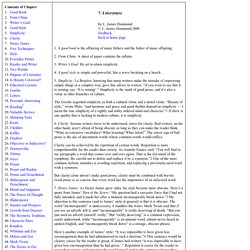 A good book is the offspring of many fathers and the father of many offspring. 2. From China A sheet of paper contains the infinite. 3. Writer’s Goal By art to attain simplicity. 4. 5. The Greeks regarded simplicity as both a cultural virtue and a moral virtue. 6. Clarity can be achieved by the repetition of certain words. But clarity alone doesn’t make good prose; clarity must be combined with brevity. 7. Here’s another example of James’ style: “It was impossible to have given less encouragement than he had administered to such a doctrine.”4 This sentence would be clearer, easier for the reader to grasp, if James had written “it was impossible to have given less encouragement than he had given...” One final example: “I dare say I fancied myself in short a remarkable young woman and took comfort in the faith that this would more publicly appear.”5 This sentence is wordy, in my view, and could be improved by deleting the phrase “in short”. 8. 9.

Renaissance Drama and Magic: Humanism and Hermeticism in Early Mo. Understanding Macbeth: A Student Casebook to Issues, Sources, and Historical ... - Faith Nostbakken, William Shakespeare - Google Könyvek. The Centre for Early Modern Studies. Home - Drama Online. For students. 171. Gender Roles in Macbeth and What It Means to be a Man. Shakespeare did not have much faith in traditional gender roles. 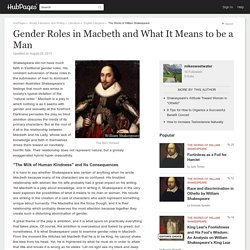 His constant subversion of these roles in the submission of men to dominant women illustrates Shakespeare’s feelings that much was amiss in society’s typical dictation of the “natural order.” Macbeth is a play in which nothing is as it seems with gender and sexuality at the forefront. Darkness pervades the play as blind ambition obscures the minds of its primary characters. But at the root of it all is the relationship between Macbeth and his Lady, whose lack of knowledge and faith in themselves drives them toward an inevitably horrific fate.

Their relationship does not represent nature, but a grossly exaggerated hybrid hyper-masculinity.