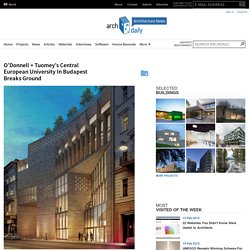 The new collection of buildings and restoration projects for the Central European University in Budapest sits within existing courtyards in a dense area of the city. Bringing a total of 35,000m² of new space to the inner-city campus, the project consists of a new library spread across five floors, an auditorium, multiple public spaces, teaching and learning facilities, study rooms, and a café. In an interview with Sheila O’Donnell and John Tuomey on the occasion of the RIBA Gold Medal ceremony earlier this year, the Irish partnership commented on this project: We’ve noticed that the pattern of buildings in Budapest, compared to the pattern of buildings that we’re used to in Ireland or London, is very strong and therefore very evident.

The €34million scheme spans six buildings in Budapest’s historical city centre. Folded -ROOF- landscape: Day care centre by dorte mandrup arkitekter - DETAIL-online.com. PROGRAM - In Berlin, a New Shop That Offers Much More Than Shopping. Photo Spanning the lower levels of the private club Soho House Berlin in the city’s Mitte district, a new space officially opening this weekend — called, simply, the Store — offers just about everything a creative professional might want under one roof: a place to work, to play and to indulge in a bit of spending. 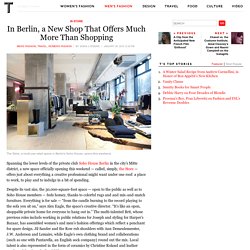 Despite its vast size, the 30,000-square-foot space — open to the public as well as to Soho House members — feels homey, thanks to colorful rugs and and mix-and-match furniture. Everything is for sale — “from the candle burning to the record playing to the sofa you sit on,” says Alex Eagle, the space’s creative director. “It’s like an open, shoppable private home for everyone to hang out in.” 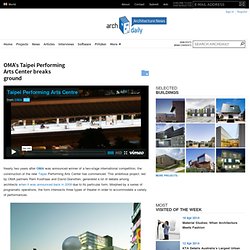 This ambitious project, led by OMA partners Rem Koolhaas and David Gianotten, generated a lot of debate among architects when it was announced back in 2009 due to its particular form. Morphed by a series of programatic operations, the form intersects three types of theater in order to accommodate a variety of performances. The main theater, which seats 1,500, is expressed on the exterior as a large sphere while the two smaller theaters, each capable of seating 800, are represented as peripheric cubes. All the stage accommodations are brought together within the central cube, allowing for more flexibility as theaters can be used independently or combined, thus expanding the possibilities for experimental performances – an art which is very strong inTaiwan.

The 180 million dollar project is set to be completed in 2015. Ptruj Performance Center Competition Winner / Enota. Enota has been awarded first prize for the renovation of the Dominican Monastary into a Performance Center located in the western most part of the historical center of Ptruj, Slovania on the embankment of the Dvara River. 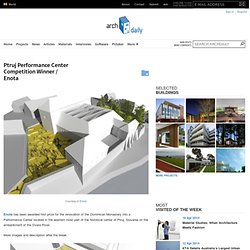 More images and description after the break. Ptruj is a old Slovanian city steeped in layers of history beginning in antiquity.